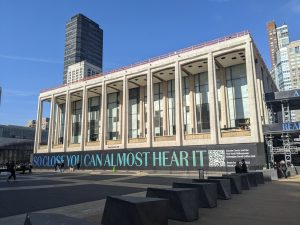 The home of the New York Philharmonic has undergone many facelifts over the years, but its latest redesign is nearly ready to be revealed. On Wednesday, Lincoln Center announced that the long-awaited renovation of David Geffen Hall would be completed ahead of schedule by October of this year.

Back in 2015, a $100 million donation from new namesake David Geffen revived plans to reimagine the concert hall, a project which raised another $450 million in intervening years. The proposal, which certainly brings much needed acoustic and spatial updates to the hall, nevertheless met with some resistance from preservationists and modern art lovers for its removal of Richard Lippold’s famous site-specific installation “Orpheus and Apollo” which had hung in the lobby since the hall’s opening in 1962.

This iconic piece had been a part of Lincoln Center’s history from the beginning. Construction of the 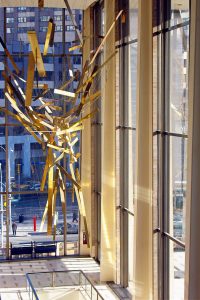 “Orpheus and Apollo” was installed by its artist in 1962.

Philharmonic Hall began in May of 1959, and the dual sculptures were installed several months after its completion four years later. From its conception, The Lincoln Center for the Performing Arts prioritized the inclusion of visual art. “Orpheus and Apollo” was the Center’s first major commissioned piece, and Lippold worked closely with the original Philharmonic Hall’s architect, Max Abramovitz, to form a partnership in which space and sculpture seamlessly complemented each other. The architect, designing an austere and minimalist space, still longed for a sense of tradition in his Brutalist building. To accomplish this, Abramovitz tasked Lippold with creating a sculpture that evoked the classical chandeliers in the entryway. The artist’s modern interpretation, through his pair of near-symmetrical hanging sculptures, was a success. The aptly chosen theme of the sculpture represents Apollo, Greek god of the arts, giving his half-human son, Orpheus, the gift of music. Made up of 190 individually hanging plates of highly polished Muntz, a copper alloy, the two large bodies seemed to reach toward each other in an embrace.

Lippold’s artwork was removed from the Hall’s lobby in 2014; when 2019 renovation renderings did not show their reinstallation in the space, Landmark West! and other preservation groups took action. We successfully applied for the sculpture to be featured in the Preservation League of New York State’s 2020-2021 “Seven to Save” list, arguing that such a site-specific piece of artwork deserved to stay in the space designed to house it. The piece’s bars and cables remain in storage in New Jersey, and are currently expected to be reinstalled in the new LaGuardia airport’s Great Hall.

The new David Geffen Hall will feature a number of other changes. The concert hall itself will lose 500 seats in favor of curved, organic seating much closer to the stage. The building will also feature a new Welcome Center with a box office and small café. A lobby, double the size of its predecessor, will be home to a lounge, bar, and concessions. Most notably, in an effort of inclusion it will also include a large media wall that will screen events and performances for audiences to watch for free.  When asked in 2019, Lincoln Center did not comment on why they would not maintain the lost 500 seats and simply offer those for free. This new approach is expected to begin when the hall reopens.

While a Philharmonic Hall without “Orpheus and Apollo,” is a strong statement about the current role of the Arts at Lincoln Center, we must also pause to consider the whole of Lincoln Center.

Conceived as a complex by different architects working in tandem, the current piecemeal approach has seen alterations to the fountain, plaza, Vivian Beaumont, The Film Society and the Juilliard School.  In and of themselves, each renovation has merit, but with each alteration the cohesion of the whole suffers.  We await opening night.  If the renderings are any insight, the new Phil will have loud blue and red walls–a stark contrast to the classy travertine, bronze, whites and lights that define the other structures in the Lincoln Center ensemble.