The Spirit on Tall Talk 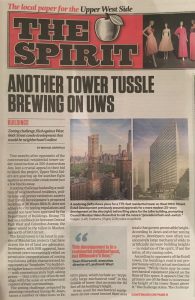 Reporter Michael Garofalo reports on the DOB CHALLENGE against 36 West 66th Street in the September 20-26 issue of the West Side Spirit.  FULL ARTICLE HERE. Jointly filed by LANDMARK WEST! and neighbors of the 10 West 66th Street Corporation, the challenge was presented on Thursday, September 13th at the Holy Trinity Lutheran Church VIDEO RECORDING OF EVENT HERE.

In the article, Garofalo cites directly from the challenge, as well as from George Janes, the zoning expert who wrote the text, elected officials and representatives from the community.  He concisely outlines the “bait-and-switch” approach the developer used to gain time in site preparation, and discusses the zoning interpretation the developer is using which, if accepted would “neuter” the tower-on-base regulations citywide.  None of the representatives of the developer in the audience spoke publicly at the event.

The challenge was filed on September 9th, and the DOB is expected to respond within 75 days, that being Friday, November 23rd.