The Upper West Side Beat 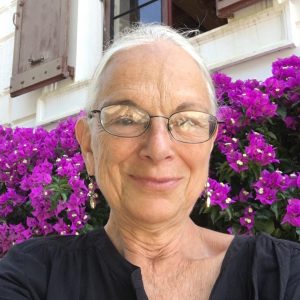 Claudie Benjamin jokes that she’s ‘probably been in every building on the Upper West Side’ and after speaking to her, you are likely to believe it!

Benjamin, whose parents relocated the family here while she was in second grade, was responsible for combing the Sunday papers for apartments.  Initially drawn to the Upper West Side by the family patriarch; her sociologist father (who worked in criminal justice at Rutgers) found an affinity of values with the transitioning neighborhood’s vibe, particularly its bookish residents and their common sense of community service.  Joined by her mother, a WWII refugee, and a sibling in tow, week after week, for five years, the family dutifully followed Benjamin’s designated classifieds, as they explored the neighborhood.  She would indeed find the family a new home—one where her parents would stay—even though Benjamin, a true explorer and lover of travel, was more itinerant.  Despite an 18-year stint in New Paltz, she still managed to notch five UWS residences from Riverside to Columbus, rowhouse to apartment house, and historic district to individual landmark.  Although she claims to never had an interest in being a real estate agent, she has a photographic memory and can readily describe a building in proper architectural terms–even sharing a specific, personal aside relating to it in the process.

A quintessential New Yorker, Benjamin has continually reinvented herself.  A painter specializing in oils, she strove to use her skills to improve the environment and greater community.  With a Masters in teaching from Columbia, Benjamin would open a gallery.  Representing other artists’ work she found that she needed to describe the pieces and draw meaning out of the artists to translate their intent.  After a critical mass of articles Claudie Benjamin realized she had more to say with the typed word than with the paint brush which for her, was often too reclusive.  She found writing involved others more directly and left her feeling more engaged.

Her career shift resulted in a series of positions as head of Public Affairs—first as an advocate to garner funding for the most vulnerable students in a school system where she balanced the sharing the personal stories of others with dignity amidst the stigma of those who failed in a system not designed to their needs.  And then as a public affairs director for a high-end hospital where she would don full PPE and had the opportunity to regularly observe medical procedures in the operating room.  Despite not having a medical background, she leveraged this experience and shifted her focus to become the Public Affairs Manager for a Newark trauma center. Although just 45 minutes from Zabar’s, the experience was a full immersion in a different world.  Benjamin continued her career in a VA hospital using her gift to write about those convalescing—the interviews alone helped in the healing process and the mental psyches of wounded veterans.

After a career well-spent, Claudie Benjamin wanted to refocus on the city she loves most, and its human interactions—the streets—the culture.  With a keen eye and a penchant for detail honed through countless surgical reports, Benjamin has directed her precision to the Upper West Side which also fuels her lust for travel.  What has surprised her most in her vocation?  The international part of it!  Although Benjamin previously focused on immigrants working on Columbus Avenue, her work on West 72nd Street was markedly diverse!  Benjamin admits that she is also sometimes embarrassed to still be learning so much about the neighborhood she has called home—as she admittedly rattles off Park West Village and two other sites she plans to research further.  Although she has several series under her belt, when asked about her favorite interview, she is coy.  Only admitting that she is fully immersed in her current one, and looks forward to her next.

The bottom line?  With a nonchalance, Benjamin admits, ‘people in general, have stories.’  Who would have thought this expert tailor on West 72nd Street was a poet, or this master chocolatier on Columbus had a corporate investment career first?  There is so much talent on the Upper West Side, and for Benjamin, it has become a passion to share it.  Her interviews are most often exhilarating rapid-fire affairs, often with glimpses of family when people begin to lower their guards.  She finds them endlessly interesting and her process is to mold the information while it is fresh to capture the same energy in typed form.

When not running interviews Claudie Benjamin attends to her enthusiasm for travel: whether with her husband, children, grandchildren, with friends or even alone.  She also loves digging into nature.  Whether absorbing it with a coffee and moist sticky bun (which they stopped offering…) from the Boathouse Café in Central Park or enjoying the heartfelt efforts of her neighbors who have toiled to make our various Community Gardens like Verdi Square or the West Side Community Garden on 89th Street oases of their own.  We are grateful that now, the Upper West Side is her beat!