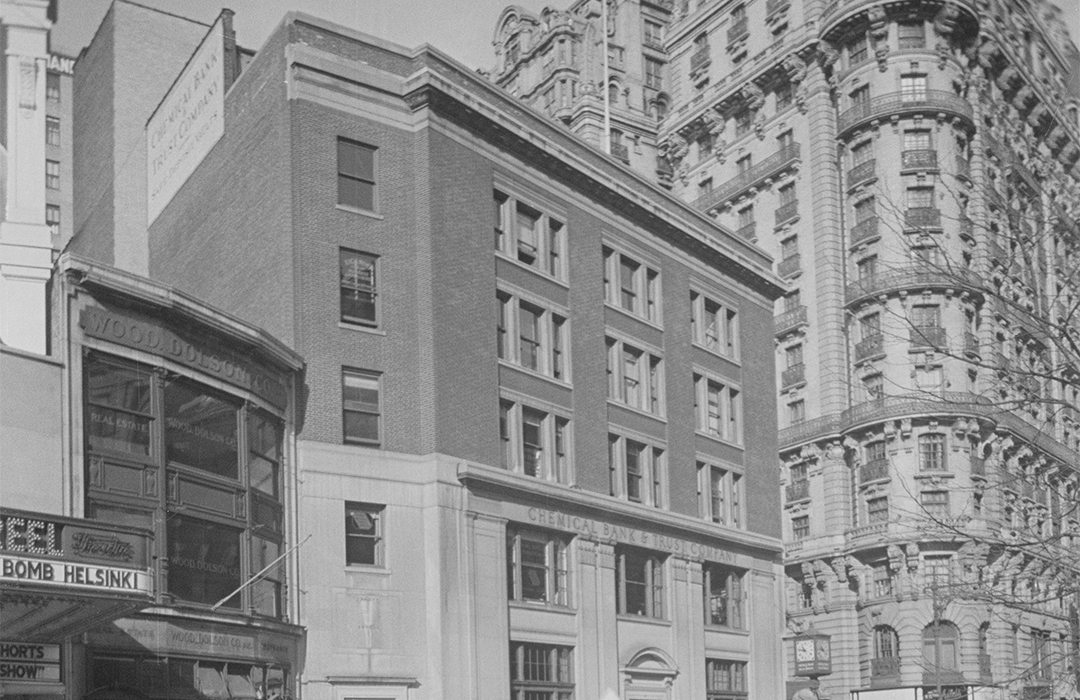 The Rutgers Street church was founded on the corner of Henry and Rutgers Streets in 1798.  Nearly a century later, in 1888, the congregation acquired the large lot at the southwest corner of Broadway and 73rd Street.  Architect R. H. Robertson designed a formidable Romanesque Revival church on the site.

Following the end of World War I, the trustees of the Rutgers Presbyterian Church realized the land it had purchased for $93,700 was now worth more than $1 million.  In 1923 they settled on a plan to make the most of the real estate.  The concept of “skyscraper churches” had swept the county for several years.  Church buildings were demolished to be replaced with apartment or office buildings that dedicated space for the religious organization.

Architect Henry Otis Chapman’s original plans for the corner called for a five-story bank building that included space for a chapel and church auditorium on the ground floor, and various Sunday school and other church spaces on the upper floors.  But for some reason, the plan was scrapped.

The concept of “skyscraper churches” had swept the county for several years.

Instead, Chapman designed a complex of three buildings—a five-story bank building on the corner, a “church house” directly behind it on West 73rd Street, and a church next door to that.  Chapman visually connected them by cladding all three structures in red brick trimmed in limestone but gave each a separate historic style—Renaissance Revival, Elizabethan Revival, and English Gothic, respectively.

Called the Rutgers Building, the corner structure held a two-story bank space, entered through a Renaissance-style doorway at 2097 Broadway.  Another entrance, almost hidden to the side in a chamfered corner at 2093 Broadway, gave access to the offices on the upper floors.  The United States Mortgage & Trust Company (which had been directly across 73rd Street) leased the bank portion.  Its opening in January 1926 was accompanied by an announcement that called it “the most commodious banking home in mid-Manhattan West Side district.”  The announcement boasted, “A handsomely appointed department, including a comfortable reception room and separate tellers’ windows, are provided for the exclusive use of women customers.” 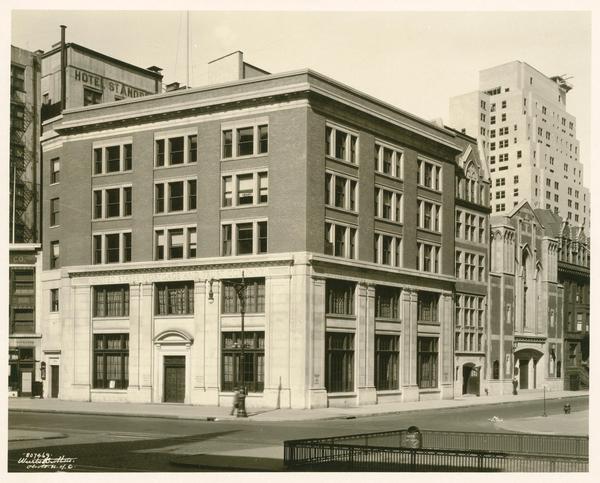 The upper floors became home to tenants, many of whom were involved in real estate.  Among the original occupants were the newly formed Root-Doubleday & Co., which dealt in “general real estate and mortgage business,” according to The New York Sun on February 1, 1926; and the investment firm of Clee & Company.

Three years after moving in, United States Mortgage & Trust merged with the Chemical National Bank, becoming Chemical Bank & Trust Company.  The signage on the outside of the Rutgers Building was changed to “Chemical Bank.”

Operating from an upper floor office at the time was The Ragul Company, which seems to have marketed just one, somewhat questionable product by mail order to both men and women.  An advertisement for the Rugal “Brown” Tabs promised:

Awaken the Vigor that lies dormant in your system.  Awaken this slumbering Giant of Nerve Force.  Enjoy all the pleasures of life, now.  30 days treatment $5.00.  Ten days treatment $2.50.

Operating from an upper floor office at the time was The Ragul Company, which seems to have marketed just one, somewhat questionable product…

The cost for enjoying life’s pleasures for a month would be equal to about $80 in today’s money.

More mainstream tenants in the 1930’s were the real estate office of W. G. Kohler, the offices of the Metropolitan Garage Board of Trade, and Flaherty Associates, real estate.  By the mid-1960’s the headquarters of the New York State Christian Endeavor Union was in the building.  The organization described itself as “an interdenominational, international, and interracial agency in local Protestant churches specializing in service for youth.”

By the mid-1970’s, the bank portion of the building was home to a Chase Bank branch which remains today.  Although the two-story limestone base has inexplicably been painted, overall, Henry Otis Chapman’s prim 1926 structure is little changed.

Think Local First to support the local businesses at 2093-2099 Broadway: