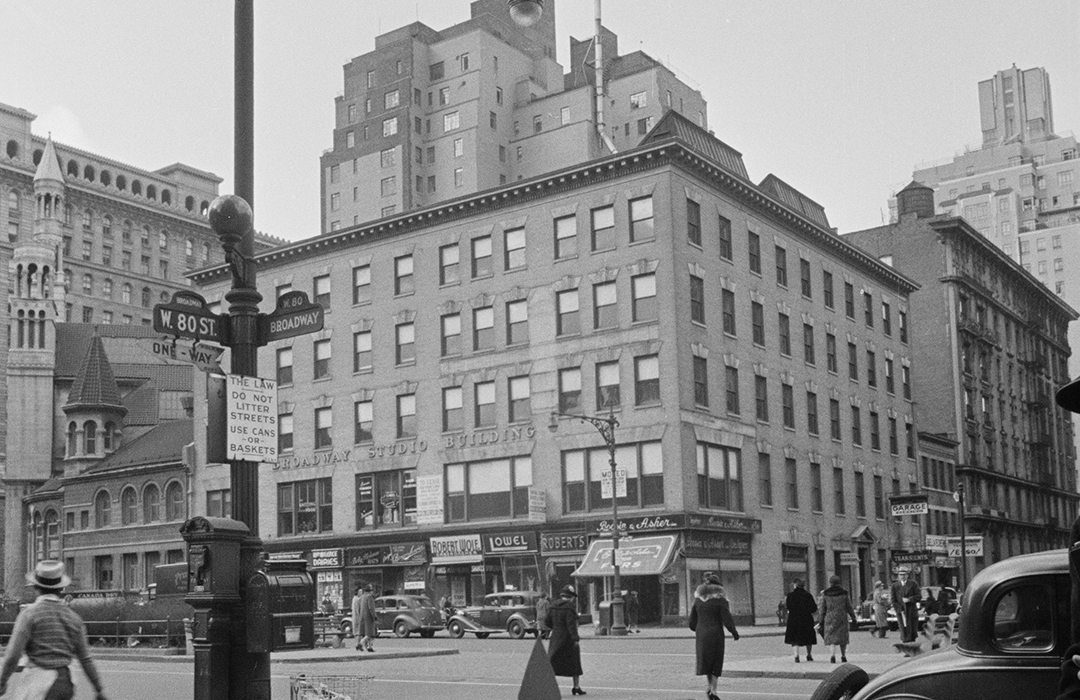 James Boorman Johnson’s concept of erecting a building solely to house the studios of artists in 1857 was groundbreaking.  His Tenth Street Studios Building set the stage for numerous such structures by the turn of the century.  Adam Craig joined the trend in August 1905 when he hired architect William W. Howe to design a five-story studio building at the southwest corner of Broadway and West 80th Streets.

It was a geographically convenient commission for Howe, whose offices were in the former Rugby Military Academy directly next door at No. 2231 Broadway.  But that would not last long.  The following month Craig gave the architect a second project–transforming that two-story building into a modern five-story store and studio building.  The all-new corner building at 2237-2239 Broadway would cost $35,000 while the renovations to No. 2231 just $8,000–a total outlay of $1.27 million today.

Howe designed the two buildings to appear at a glance as one.  They shared the same nearly colorless Roman brick–with no break in the running bond to delineate the two structures–and a continuous cornice.  Only a slight difference in the arrangement of the windows spilled the beans that these were two independent buildings.

Although from the beginning both structures shared the name of the Broadway Studio Building there was no internal connection.  And that made great sense considering their usage.  The southern section, Nos. 2231-2235, was leased to musical tenants, while the northern portion was for artists (who surely did not need the distraction of operatic voices or piano practice).

The street level housed a variety of retail stores, like the Diamond Igniter Company (one of the multitudes of automobile-related firms along Broadway at the time), and Liggett’s Drug Store in the corner shop.

The change came about with the hiring of instructor Frank Alvah Parsons who was brought on board to introduce costume design, interior decoration and design theory to the curriculum.

The well-established Virgil School of Music moved into the southern building upon its completion.  On May 15, 1907, the Musical Courier reported on a concert held a week earlier “devoted to compositions by students of the school.”  The article assured, “The program was well-received by the delighted audience.”

Among those sharing the building at the time were vocal coach Edward Hayes; Hans Kronold, who taught violin and “ensemble playing in all its branches;” and A. Russ Patterson who marketed himself as a “teacher of singing; scientific tone production and repertoire.”

In 1904, just prior to moving in, the school’s fine arts direction was broadened with the introduction of what a catalog described as “the first practical course in Interior Architecture and Decoration.”  The change came about with the hiring of instructor Frank Alvah Parsons who was brought on board to introduce costume design, interior decoration and design theory to the curriculum.

Parsons became the school’s single director in 1911.  He invited influential architects like Ogden Codman and Charles Platt, and decorators like Elsie DeWolfe and Francis Lenygon to speak here.  His direction was evidenced in a notice in The Sun on December 31, 1916: 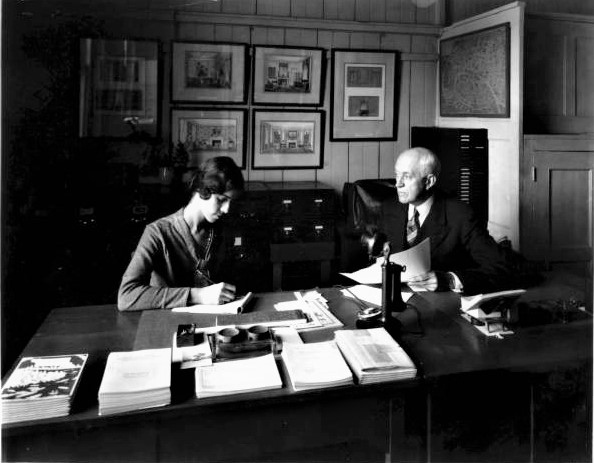 F. Parsons in his Office 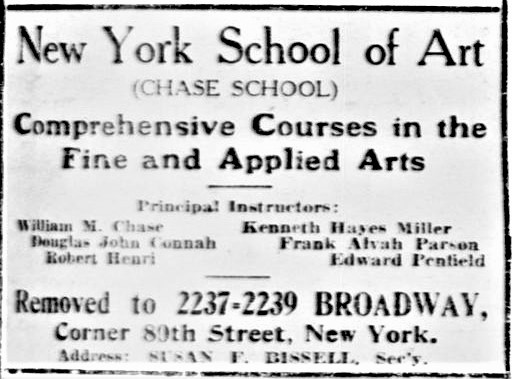 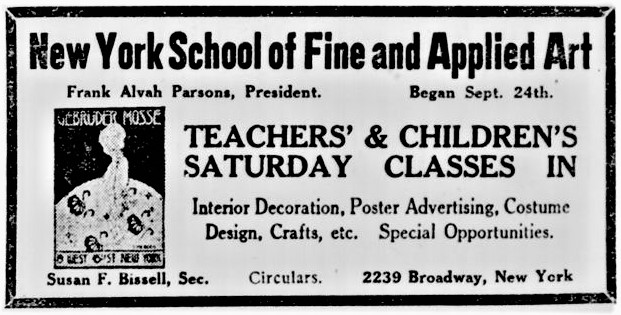 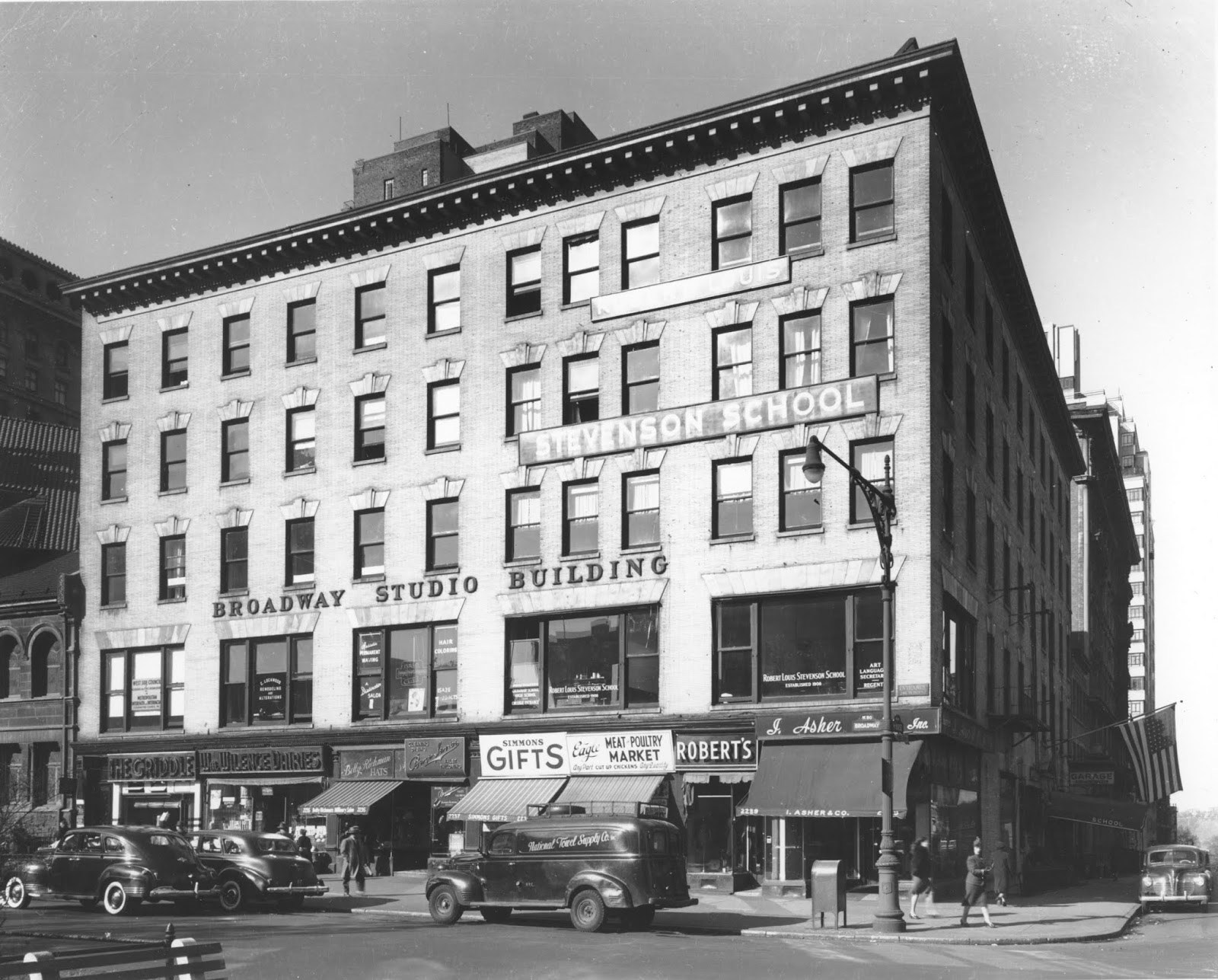 “The New York School of Fine and Applied Arts, 2239 Broadway, New York City, is offering evening courses in costume design, poster and illustrative advertising, life drawing, &c., which are designed to be of particular assistance to those who are working days and desire to make good use of their evenings.”  The article pointed out the “interesting practical nature” of the courses.

Musical studios continued to fill the southern building.  A. Russ Patterson was still here in 1921; as were Emilio A. Roxas, “composer, accompanist and coach;” and Maurice Kaufman, “violinist, teacher, composer.”

Parsons remained at the helm of The New York School of Fine and Applied Arts until his death in 1930.  By then his precept that art and design were intrinsically bonded to commerce and industry had completely changed the curriculum of the school from the fine arts painting academy established by Chase.  In 1936 the facility was renamed the Parsons School of Design.

The two buildings were finally linked in 1942 when the upper floors were renovated to accommodate the Robert Louis Stevenson School.  Founded in 1907, it moved here from West 88th Street, near West End Avenue.

The school’s principal, Dr. Annette Rubenstein, was a visible political figure and activist.  She was a highly involved member of the American Peace Mobilization, the goals of which included ending the military draft, and organizing labor unions, student and anti-war groups, and other like-minded groups into a single body.

A year before the school moved into the Broadway Studio Building, Rubenstein had led a group of female American Peace Mobilization members to Washington where they protested in front of the White House.  The noisy demonstration culminated in uniformed military dispersing the women and destroying their placards.

Dr. Rubenstein’s liberal-minded extra-curricular political activities did not escape the notice of Washington and Albany–notably after Senator Joseph McCarty embarked on his campaign against the “enemy within” in 1950.

The examination of math instructor Milton Unterman became heated when he refused no fewer than 50 times to answer the question “Are you now, or have you ever been, a member of the Communist Party?” and variations of it.

The attack on the Robert Louis Stevenson School began in 1951 when faculty members were subpoenaed to Washington to appear before the Committee on Un-American Activities.  The examination of math instructor Milton Unterman became heated when he refused no fewer than 50 times to answer the question “Are you now, or have you ever been, a member of the Communist Party?” and variations of it.

And then on May 24, 1952 The New York Times reported “With 874 veterans barred from attendance at the Robert Louis Steven School…because the State Board of Education has found the curriculum ‘below standards,’ the principal Dr. Annette T. Rubinstein, who also is vice chairman of the American Labor party, obtained yesterday a show-cause order.”

All of the school’s veteran students had received a letter from the state informing them that the payments of tuition subsistence had been canceled.  A school spokesman said “almost all the students of the school are veterans,” and The New York Times added, “the student body is predominantly Puerto Rican.”

The building continued its tradition of arts-related tenants after the school moved out around 1968.  In 1978 the Kuklicke-Stark Academy of Jewelry Art was here.  One of its owners, Jean Reist Stark, explained to The New York Times columnist Ruth Robinson in December of that year “We aspire to the re-establishment of jewelry as an art form.”

In an unpublished article in 1988 architectural historian Christopher Gray commented “Today the Broadway Studio Building remains true to its name and is still home to many artists–although its most famous tenant is probably the present H&H Bagel’s store.”

By 1989 the Ombondi gallery of art operated from the address, and in 2013 the Jewelry Art Institute was here.  A gym was installed on the second floor in 1999.

Easily passed by today, its gray brick in desperate need of a cleaning, the Broadway Studio Building more than makes up for its lack of architectural pizzazz with its contributions to Manhattan’s–and America’s–cultural history.