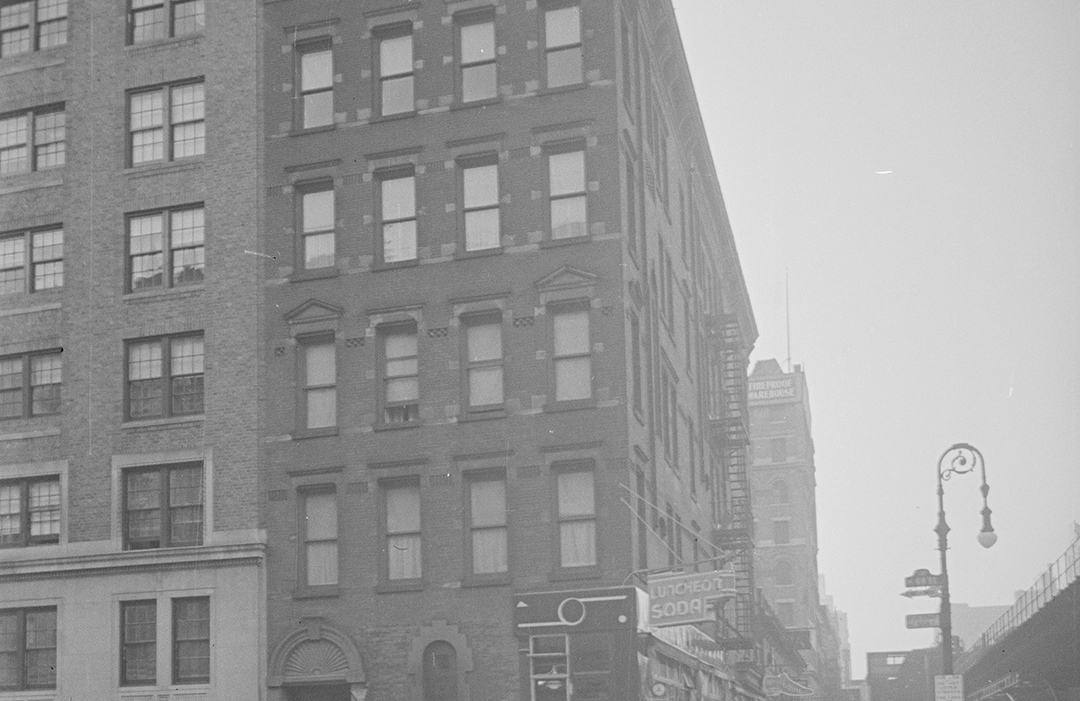 Germans and a Ghost…

On August 29, 1885, The Real Estate Record & Builders’ Guide marveled that “The progress and development of the west side during the past two years has been phenomenal.”  It went on to list many of the ongoing projects.  “On the southeast corner of Sixty-eighty street and Ninth avenue David B. Algie has just commenced the excavation for six four-story dwellings and a five-story flat on the corner,” said the article.

The buildings had been designed by the prolific architectural team of Thom & Wilson.  They projected the cost to construct the corner apartment-and-store building at $26,000—nearly $715,000 in today’s money.  Completed the following year, the five-story structure was faced in brick and trimmed in stone.  The architects designed it in the neo-Grec style with touches of Queen Anne—both newly-popular architectural styles.  There were two stores on the Ninth Avenue (soon to be renamed Columbus Avenue) side.  The residential entrance was around the corner at 78 West 68th Street.  Each of the spacious apartments had six rooms and a bath.

The tenants of the stores reflected the still-developing neighborhood.  The southern space was home to Moore Bros., sellers of “general electrical supplies,” while 179 Columbus Avenue was the real estate office of Otto Pullich.  Born in Germany, Pullich acted as agent and insurance broker for Upper West Side properties.  True to his roots, in 1897 the Biographical Directory of the State of New York mentioned that he was a member “of several German athletic, singing and benevolent societies.”

The following year, on June 21, a small fire ignited in the cellar under the office at around 7:00 p.m.  The Brooklyn Daily Eagle explained, “The trouble was caused by the melting of the connection of several gas meters that were in the basement.”  The faulty connections allowed gas to escape…

At the same time, Leopold Waitzfelder lived in the building.  He, too, was born in Germany and had come to the United States as a young man.  He established a large dry goods establishment in New York with a factory in Philadelphia.  He and his wife had two sons and four daughters, only one of whom was married when they moved in.

In 1896 Waitzfelder retired because of failing health.  On January 18, 1897 he suffered a stroke.  A week later, on January 27, The New York Times reported that he had “partially recovered consciousness, but a relapse set in yesterday.”  He died later that day at the age of 68.

In 1901 Edward D. Palmer took over the real estate office of Otto Pullich.   The following year, on June 21, a small fire ignited in the cellar under the office at around 7:00 p.m.  The Brooklyn Daily Eagle explained, “The trouble was caused by the melting of the connection of several gas meters that were in the basement.”  The faulty connections allowed gas to escape.  It resulted in eleven fire fighters being overcome and having to be carried to the street.  “Finally, the gas was shut off at the place where it enters the house and the firemen soon had the flames under control,” reported the article.

The residents, faced with a possible massive explosion, were understandably thrown into a panic.  The journalist who reported on the incident had little compassion, saying, “The damage was not great, but frenzied tenants who insisted on coming down the fire escapes instead of by the stairs, and yelling like mad men and women gave the fireman a good deal of trouble.” 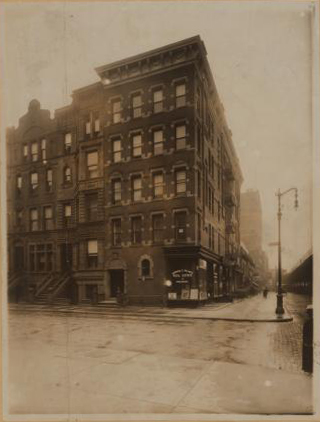 By 1912, the space formerly occupied by Moore Bros. was the New York Hardware & Cutlery Company store.  It was the target of a botched robbery by a gang of youths in the early hours of August 29.  John Murray, alias “Red” Murray, had recently been released from the Elmira Reformatory, having served three years for robbing F. C. Allen’s Maiden Lane jewelry store of $12,000 worth of diamonds.  Now back on the street, he organized a band of boys to burglarize stores.

Just after midnight Detective Cooney turned the corner to see a crowd of boys in front of the store.  As soon as they saw him, they scattered.  He chased the largest boy for blocks before “a shot from Cooney’s revolver brought the fugitive quickly to a halt,” according to The Evening World.  It was John Murray, who confessed at the police station.

Cooney returned to the Columbus Avenue store where he noticed the transom over the door was open.  He peered in.  “There was a boy inside the door and he refused to come out upon the detective’s order,” said The Evening World.  Eventually another policeman brought a stepladder and Cooney wriggled through the transom, arrested the boy, and stuffed him back out the transom to the waiting officers.  The prisoner, Henry Reilly, was 15 years old and had already served a year in the Catholic Protectory on charges of burglary.

He told police he had been tormented by Schmidt’s ghost.  “I’ve been all over the world since that time.  I’ve tried to get away from the ghost of that man.  But I couldn’t.  It kept after me, and many times I wanted to give myself up.  But as soon as I got near a police station it disappeared again.”

In October 1914, the Standard Stationery Company leased 179 Columbus Avenue from Edward D. Palmer.  It soon became the Ring & Weitzman stationery store (renamed Weitzman & Lies in June 1920).  It was the scene of a terrifying incident in 1919.

Edward Schmidt ran a boarding house down the block at 74 West 68th Street.  On the November 17, 1919, he got into a quarrel with two residents, one of whom was an Italian-born barber, Girardo Caponargri.  Two nights later a man knocked on Schmidt’s door and told him he was wanted outside.  When he walked out, he was ambushed and shot in the chest.  Schmidt ran into the Columbus Avenue stationery store.  “He then dropped dead,” reported the Daily News.

Caponargri disappeared after the shooting and police searched for him for two years.  And then, quite unexpectedly, he walked into the West 68th Street police station on August 13, 1921.  He told police he had been tormented by Schmidt’s ghost.  “I’ve been all over the world since that time.  I’ve tried to get away from the ghost of that man.  But I couldn’t.  It kept after me, and many times I wanted to give myself up.  But as soon as I got near a police station it disappeared again.”

In 1968 a renovation of the building resulted in a total of six apartments—two per floor—in the building.  At the time The Thomas Pharmacy, in business since 1904, had occupied 171 Columbus Avenue for five years.  In 1972 the northern store became home to 67 Wine & Spirts.  Half a century later both businesses remain.

Shop local to support the businesses currently at 171-179 Columbus Avenue: