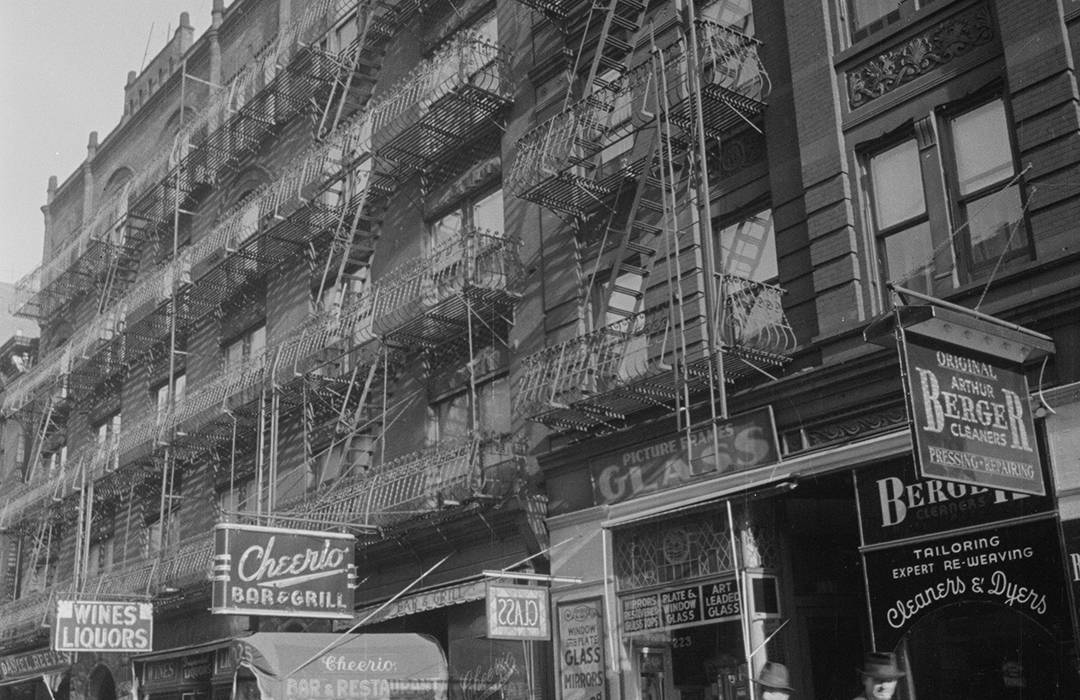 Ellen Gunning was one a of several self-reliant businesswomen in the late 19th century who made their livings in the nearly all-male domain of real estate development.  In 1891 she hired George Paccison to design three nearly matching flat (or apartment) houses on the east side of Columbus Avenue between 70th and 71st Streets.  The architect is essentially unknown today and the buildings may possibly have been his only works in New York.

The southernmost of the three Romanesque Revival buildings was 225 which, like its fraternal twins, had a store on the ground floor.  A medieval-style arched entrance above a short stoop accessed the upstairs apartments.  The upper floors were faced in brown and beige brick and featured two large arches and, rather than a cornice, a brick parapet.

The apartments became home to middle-class occupants, like Mrs. Plummer, the widow of a Chicago silk jobber who had died in 1890.  She originally moved to Brooklyn, then soon decided on an apartment at 225 Columbus Avenue.  She would be down-sizing in making the move, so she put many of her things in storage.  The three boxes entrusted to the Fulton and Flatbush Storage Company included a sizable library, silverware, paintings and the family Bible which “shows that Mrs. Plummer is a Connecticut woman of very blue blood, being descended from Roger Williams on one side of the family and from Gen. Putnam on the other,” said The New York Times.  Especially important to her was a silk quilt that had been passed down to her “which contained the cravat that George Washington, the Father of his Country, wore when he danced with the widow’s grandmother at the first inaugural ball.”

Then in the summer of 1893 Mrs. Plummer was notified that her things had been sold at auction.  She hired a lawyer, Mirabeau L. Towns, who filed a complaint with the U.S. District Attorney, Jesse Johnson.  Johnson ordered the storage company to retrieve the sold goods.  And it did.  More or less.

The Times said that when Mrs. Plummer asked about her sterling silver pickle castor, “McMahon showed her a caster that she says didn’t look any more like her castor than a cow looks like a house.”

On December 18 The New York Times reported, “The story of the Widow Plummer and her great loss would be incomplete if nothing was said of the alleged efforts of the storage company to duplicate the Washington quilt, the family Bible containing the pedigree, the Summer clothes, the Marseilles spreads, the needlework, the paintings, and the other things that the widow lost.”  The manager of the warehouse went to “stores, garrets, and junk shops” and, using the inventory of the lost items, purchased replacements.

Mrs. Plummer’s heirlooms were gone, and the attempted replacements were laughable.  The Times said that when Mrs. Plummer asked about her sterling silver pickle castor, “McMahon showed her a caster that she says didn’t look any more like her castor than a cow looks like a house.”

While the widow fought with the warehouse company, Julius and Noemie Lassere had problems of their own.  The couple had been married in New Orleans in 1880 (the first Lasseres were listed in the city records as early as 1840).  Like Mrs. Plummer they were original tenants, but their stay in the Columbus Avenue apartment would not be very long.  On December 28, 1893 The Sun reported that Noemie had gotten a divorce from her husband.  “She showed that he had been at the Metropolitan Hotel with a woman she did not know.”

As a Mrs. Bradley prepared to move out of 225 Columbus in the summer of 1894, she hired an out-of-work paperhanger to pack her things.  Alfred Lloyde did the work on August 22 and sometime after he left, Mrs. Bradley noticed a diamond ring was missing from her bureau drawer.  She valued it at $75, or about $2,300 today.  The Evening World reported “Suspicion at once fell on Lloyde.”  The 25-year old was arrested a short time later.

By 1899 the store was home to the H. A. Cassebeer Pharmacy, operated by Dr. Henry Arthur Cassebeer, Jr.  The young doctor (he was only 25-years old that year), lived in an upstairs apartment.  An advertisement in The Sun in January 1899 noted that the Celebrated Healing Springs water from the Virginia Hot Springs, were on sale at the H. A. Cassebeer drugstore. 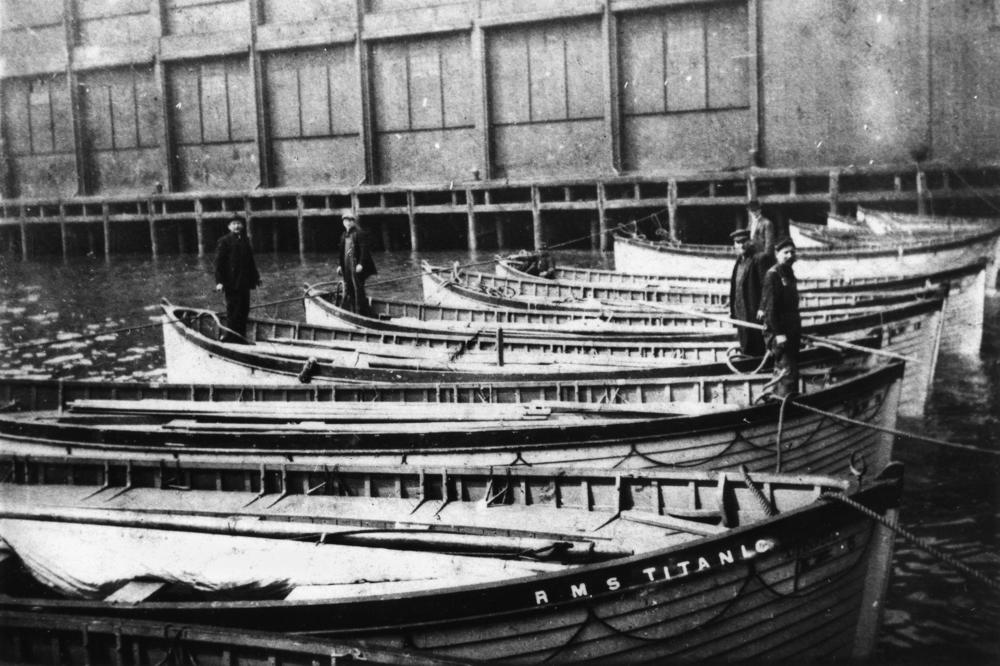 Lifeboats of the Titanic in NY Harbor

In 1909 Henry married a divorcee, Eleanor Fostick Peak, who was two years younger than he.  They remained at 225 Columbus Avenue for just two years, moving to West 58th Street in 1911.  Eleanor had a son, Lewis, from her first marriage and early in 1912 she sailed to Europe to visit him.  While there, she received word that Henry Cassebeer was ill, so she cut her visit short and booked passage home, leaving Cherbourg, France on April 10, 1912 on the R.M.S. Titanic.

At 11:40 p.m. on April 14 she was awake in her cabin on D deck when the massive ship shuddered upon hitting the iceberg.  As she headed to the main deck to investigate, she was escorted by passenger Harry Anderson, who stayed with her until 12:45 a.m. when she was lowered away in Lifeboat 5.

In the meantime, at least two residents of 225 Columbus Avenue brought unwanted publicity to the address.  On August 5, 1909 John Harmino appeared in court charging that his wife, Teresa, “and a man named Rudolph Havarat had lived as man and wife at No. 225 Columbus avenue,” as reported in The Brooklyn Citizen.

And the following year on November 25, 1910, 42 plainclothes detectives swooped into apartment buildings and storefronts as part of an drive to abolish fortune telling scams.  Among the “best known delvers into the mysteries of the future” (as worded by the New-York Tribune) who were arrested that day was Rita St. Croix at 225 Columbus Avenue.

By 1929 the ground floor shop was home to C. J. Young Upholstery.  The Great Depression forced homemakers to make do with old furniture rather than buy new, and the shop promised “repairing a specialty, at your home.”

When nearly at his destination, McCombs told Keeley to stop at a Bay Shore bank.  Another cabbie saw him get out of the taxi and go in and he pulled his own cab to the curb.

He walked up to Keeley’s window and, according to the New York Sun, “told him McCombs owed ‘every taxi driver in the world.’”  When McCombs got back in the cab, Keeley demanded his fare up-front.  When McCombs refused, he drove back to Manhattan and had him arrested.

Around the same time the upstairs tenant list was disproportionately Irish.  On October 22, 1932 the Irish community newspaper The Advocate reported on the death of Mrs. Miry O’Flaherty, “a native of Croom, Co., Limerick.”  Her funeral was held in her apartment, followed by a requiem mass at the Church of the Blessed Sacrament nearby.

Another Irish-born tenant, Luke Keeley, made his living as a taxi driver.  On June 1, 1933 he picked up a fair, 54-year old civil engineer Walter D. McCombs who was going to Bay Shore, Long Island.  What Keeley did not know was that McCombs had been out of jail for only three days for not paying a cab fare.  When nearly at his destination, McCombs told Keeley to stop at a Bay Shore bank.  Another cabbie saw him get out of the taxi and go in and he pulled his own cab to the curb.

He walked up to Keeley’s window and, according to the New York Sun, “told him McCombs owed ‘every taxi driver in the world.’”  When McCombs got back in the cab, Keeley demanded his fare up-front.  When McCombs refused, he drove back to Manhattan and had him arrested.  The prisoner told the judge that “his principal regret over going to jail was that this is his birthday and his wife had planned to bake a cake for him.”

Another Irish immigrant was Nora Mullins, born in County Mayo.  She lived in the building until her wedding on November 24, 1936 to a very un-Irish Sidney Griesman.

The year after that happy event, the Cheerio Bar and Grill opened in the ground floor space.  And its manager, “the popular Paddy Doyle,” as described by The Advocate, also hailed from Ireland.

The store space that had been a pharmacy, an upholstery shop and a tavern became the Thai restaurant Sawadee in 1986.  It remained for more than a decade, replaced in 1998 by Mare-Mare, a seafood restaurant.  On March 11 The New York Times food critic Florence Fabricant predicted that chef Rob Miketa’s “revolving-door career may have finally settled down.”  She was wrong.  In December that same year the Pomodoro Restaurant Group of Long Island opened Burculino, an Italian restaurant in the space.  The owners refashioned it as Bistro Cassis in 2005, which remained at least until May 2020 when the ongoing COVID-19 outbreak forced its closing.  Today it is Manny’s Bistro French Restaurant.

After 130 years, the apartment and store building by a more-than-obscure architect shows remarkably little change.

Shop local to support the business currently at 225 Columbus Avenue: