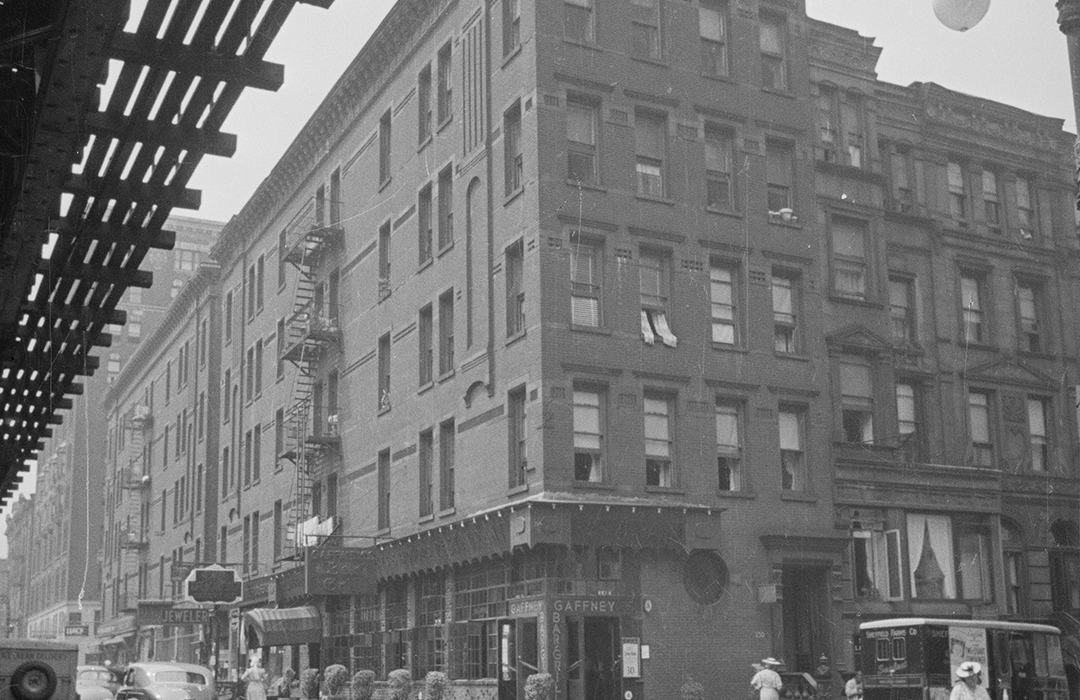 In 1885, the real estate development firm of John Farley & Son purchased the western block front on Columbus Avenue between 70th and 71st Streets.  The architectural firm of Thom & Wilson was contracted to design back-to-back flat and store buildings on the vacant parcel.  Completed the following year, the mirror-image structures were faced in red brick and trimmed in brownstone.  Overall Renaissance Revival in style, they were greatly influenced by the popular neo-Grec and Queen Anne styles.

The northern building had two storefronts on the Columbus Avenue side.  Its double-doored residential entrance was around the corner at 101 West 71st Street above a three-step stoop.  Unlike so many other Upper West Side apartment buildings, it went by its address rather than a name.

The six-room apartments filled with professional tenants, like Dr. Josephine Walter, who worked for the Board of Education.  Dr. Walter exami­ned female teaching candidates.

F.L. Toomey and his wife lived here by the mid-1890’s.  Toomey was a builder, and, like all the residents of the building, his wife had domestic help.  Among them was Anna Janssen, who had done the Toomey’s washing since 1894.

Anna had immigrated to America from Sweden 1n 1883.  She was described by The World as “above all things an honest-looking woman.  She has not the slightest pretension to beauty, but her square shoulders, sturdy neck, stout arms and thick hands show that she is one who has toiled hard for many years.”

Anna came to the Toomey apartment on Thursday mornings to do the laundry, but there was a problem on June 9, 1896–it was raining.  Wet laundry had to be hung on clotheslines that crisscrossed the light courts between buildings.  And so, Anna sat for a while hoping the rain would cease.  When a deliveryman arrived with a package, according to The World, Mrs. Toomey, “took a bit roll of bank bills from a drawer, and after counting out what she wanted, left the rest on the dining-room table and went out to pay the delivery man.”  Taking a rather sexist bent, the newspaper explained that what happened next would not have happened had it been Mr. Toomey paying the man.

She was described by The World as “above all things an honest-looking woman.  She has not the slightest pretension to beauty, but her square shoulders, sturdy neck, stout arms and thick hands show that she is one who has toiled hard for many years.”

“If that bunch of money had been rolled up by a man, a small bill would have been wrapped around the outside.  But Mrs. Toomey had rolled $160 together, and womanlike, she had put a $100 bill on the outside.  That bill caught Anna Janssen’s eye.  It fascinated her…The temptation was too much.  She whipped the bill into her pocket, and when Mrs. Toomey came in half a minute later, she calmly went on talking about the horribly rainy weather.”

Anna went home, hid the bill between two chunks of kindling, and went to another client’s house.  When she returned, her next-door neighbor told her a man and woman had been there looking for her.

Speaking of the bill as if it were a person, Anna later said, “So I knew right away it was Mrs. Toomey looking for her $100 bill.  So I took him out of the wood-bin and carried him back to Mrs. Toomey.”  And she had a solid explanation for her crime.  “There, I says.  I took him because the devil made me.”

Mrs. Toomey was impressed at Anna’s honesty and promised she would not have her arrested.  But it was too late.  Her husband had already reported the robbery and the police took Anna in.  Before the magistrate, according to The Journal on July 11, 1896, “she wept bitterly and said: ‘Never before did I take even a pin that didn’t belong to me.  I must have been crazy.  The devil must have got into my head.”

At the time of Anna Janssen’s self-diagnosed demonic possession, Homer Bostwick’s real estate office had been in the northern storefront for several years.  He and his wife, Mary, had been married since 1886 and had four children.  But in the summer of 1893 Bostwick’s interests drifted from real estate and family life to the handsome Mrs. Minora Hones.

While Mary traveled to visit relatives in California, Homer checked into the Lake Dunmore Hotel in Vermont.  A few hours later Minora Hones checked in.  “It was alleged…that Boswick and Mrs. Hones were intimate at this place during the summer, and that on their return to this city Mrs. Hones used to visit at the Bostwick home, from which Mrs. Bostwick was still absent,” reported The Sun.  She was also seen frequently coming and going from the Columbus Avenue office.

In September 1894, Bostwick left Mary and a month later Minora Hones left her husband.  In 1896 Bostwick closed his real estate office and fled to Montclair, New Jersey “to avoid paying the $30 a week directed to be paid to Mrs. Bostwick,” according to The Sun on January 15, 1897. 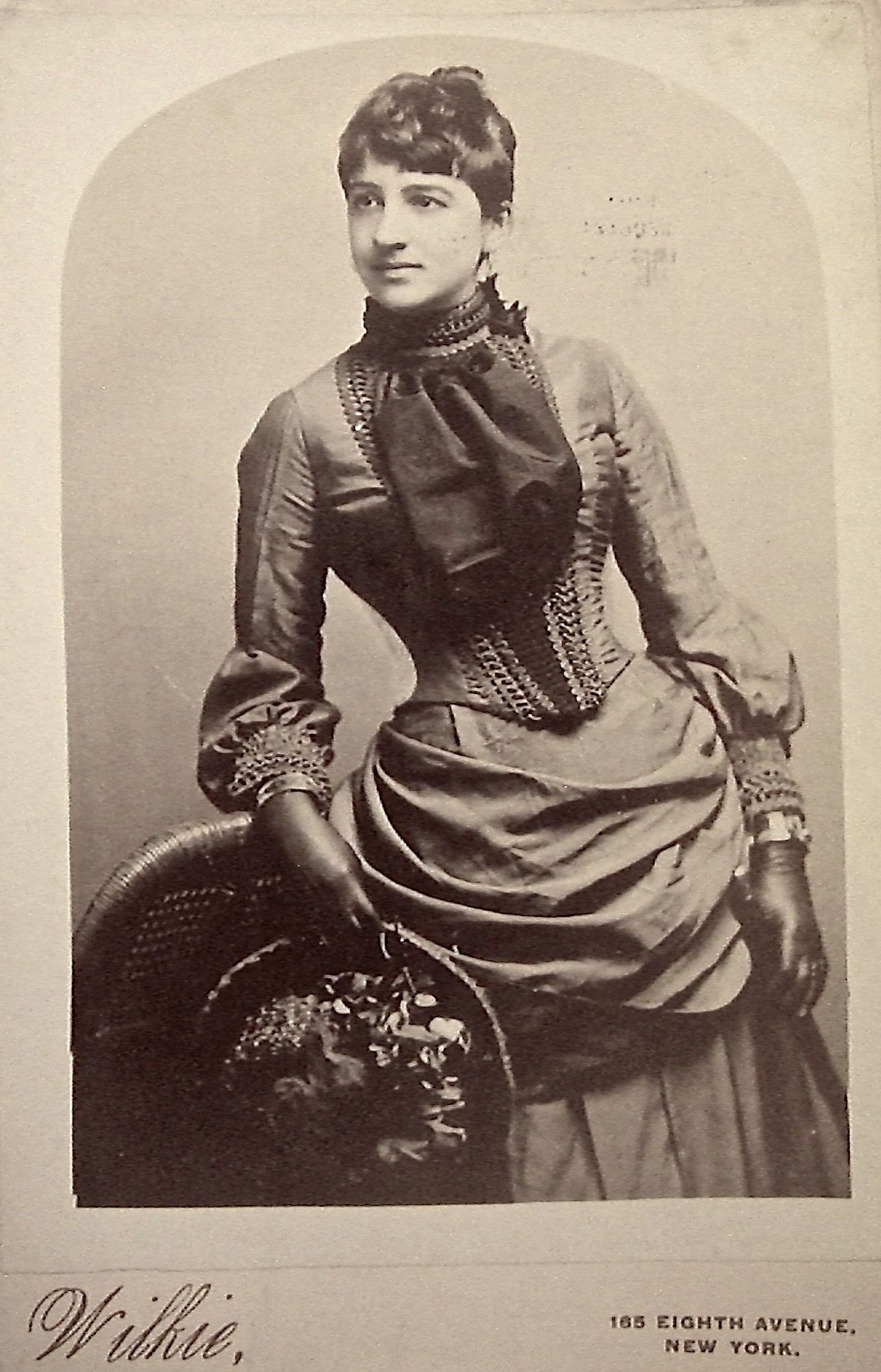 Emily Flynn shared an apartment here in 1898 with her two adult sons and a daughter.  Emily was the 55-year-old widow of Cornelius Flynn, formerly a city alderman.

She had gone out with friends on the evening of November 22, 1898.  A few hours later her son, George, told police a terrifying story.  Not long after his mother returned home just after midnight, he said, she heard a noise at the hall door and went to lock it.  The New York Times reported, “Just as she had hold of the latch the door was pushed open and a man appeared, demanding her money.”  Emily, according to George, swore she had no money–something the burglar did not want to hear.

He struck her on the face, knocking her to the floor where she struck her head, dazing her.  As he rummaged through drawers, Emily got up and went into the kitchen.  The man followed and struck her again, this time knocking her unconscious.  The New York Times said that shortly afterward George came home and found her.  He took her to Roosevelt Hospital with two blackened eyes and a severe bruise over the left temple.

There Emily began to recount the night’s events to police.  But George interrupted, saying “Keep still, mother.  Let me tell the story.”  Later, at the station house, he repeated the story of the brutal burglar.  But, according to the Democrat and Chronicle, “the policemen were not impressed with it.  They questioned him closely and he broke down and confessed that the burglar story was untrue.”   In fact, George, who “from all accounts dresses very well but does not work for a living,” had attacked his mother.  As she lay in the hospital, he was arrested for assault.

The burglary story of John C. MacBroom and his wife on December 22, 1906 was more believable—and true.  The couple went shopping that evening for Christmas presents.  In their absence, a neighbor, Rainer Fraser, noticed that their door had been forced open and he notified police.  The burglars had made off with more than $1,000 worth of jewelry and silverware—a heist of nearly $30,000 by today’s valuation.

Patrolman J. B. Mooney saw smoke and, after turning in an alarm, grabbed the pole of a store sign and swung himself up to the fire escape and then ran throughout the building warning the residents.

Other residents at the time included actress Irene Ackerman and pianist Ruth F. Beard.  Ackerman first appeared on stage debut as a child in 1879.  Her talents went far beyond acting.  At various times she was a theater manager, a playwright, and while living here wrote articles for newspapers and magazines.  Ruth F. Beard was living here in 1908 when she gave a recital in Carnegie Hall on November 21.

On the cold night of February 5, 1914, the residents “were driven to the street,” as worded by The Sun, by fire.  The blaze started in the cellar and spread up the wooden stairway.  Patrolman J. B. Mooney saw smoke and, after turning in an alarm, grabbed the pole of a store sign and swung himself up to the fire escape and then ran throughout the building warning the residents.   He and a fire fighter, J. Kelly, made what The Sun called several “thrilling rescues.”  The article noted, “From the third floor Mooney carried Mrs. Louisa Williams, an aged cripple, down the fire escape,” and Kelly, “found another crippled woman and carried her in his arms from the fifth floor down the fire escape.”

It may have been the fire that put Mary W. Giatras’s florist shop in 238 Columbus Avenue out of business.  It closed that same year and was replaced by Weissman Brothers, a trunk and leather goods store.

The post-Prohibition years saw the Rendezvous Bar & Grill in 238 Columbus Avenue.  It was still in the space in the mid-1960’s.  A renovation completed in 1970 resulted in eight apartments per floor.

The southern shop was home to the quirky Kiss ‘N’ Make Up store in the 1970’s and ‘80’s.  It was replaced by Alex Gordon’s jewelry store by 1990.   By 2005, Theory opened in the space and remains until the pandemic.  The northern store is home to JNH Produce.  Other than the replacement storefronts, the building is little changed externally after 110 years.

Shop local to support the businesses currently at 230-238 Columbus Avenue: