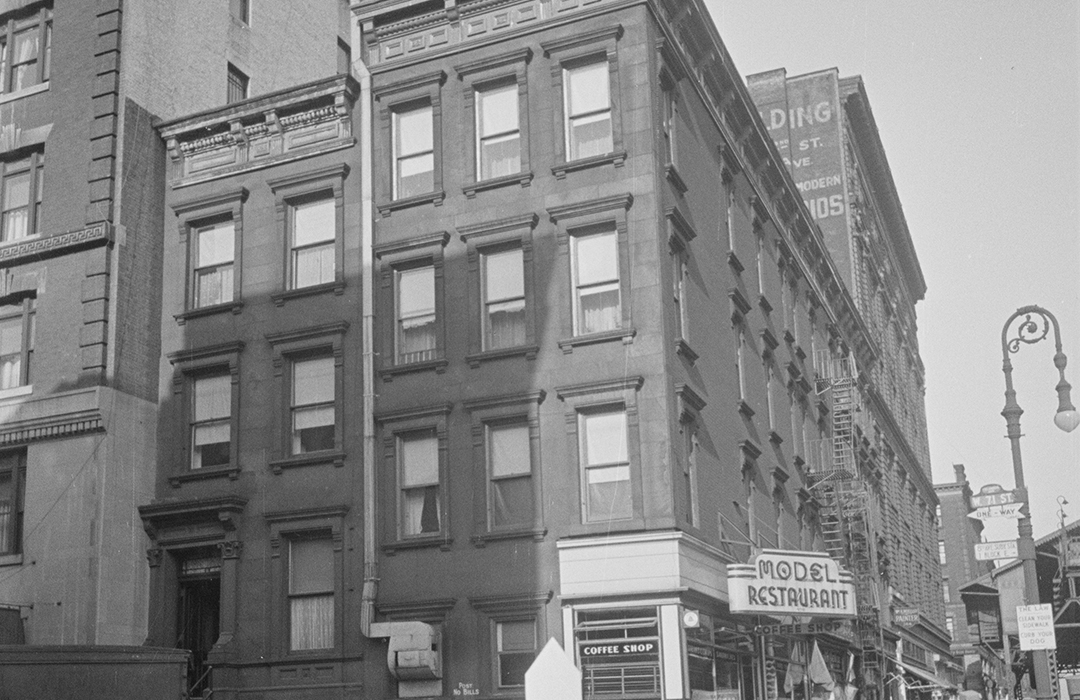 Stolen Time and a Broadway Hit

In August 1883, developer John M. Ruck began construction on a “four-story brown stone store and flat” at the northwest corner of 71st Street and Ninth Avenue (later Columbus Avenue).  He had his architects, Thom & Wilson, simultaneously design two abutting houses on the avenue in the same neo-Grec style.

The flat, or apartment, building cost Ruck the equivalent of about $525,000 in today’s money to construct.  The residential entrance was on 71st Street.  There were just three spacious eight-room apartments in the building—one per floor.  On the ground floor along the avenue was a storefront.

The residents were of the working class.  In 1891, William D. Miller and his family lived here.  It was a convenient location for Miller, whose grocery store was on the ground floor.  Another resident at the time was Hugh Lahnstein, whose butcher shop was nearby at 270 Columbus Avenue.

William H. Davis made his living as a mechanic in 1894.  The newspapers along Park Row tacked bulletins of sports updates and on the afternoon of January 25, Davis was among the crowd as the prize fight results were being posted.  He was “not so interested,” according to the New York Herald, however, to be totally distracted.  “He grabbed a hand which stealthily had his watch in its grasp.”  Davis quickly had 24-year old James Lynch arrested and held for trial.

Living in another apartment that year were a young Irish couple Daniel P. Mary K. Morey.  They ran Mary’s dressmaking business out of their apartment.  Morey, who was a trained tailor as well, managed the business.

Unable to trip him up, the judge asked, “Did you read the Constitution of the United States in night school?”  Meyer replied that he had not but had read it in a newspaper.  The World reported “After thanking the Justice, the new citizen hurried back to his bakery shop at 242 Columbus avenue, congratulating himself that he had passed his examination so smoothly.”

In 1897, the Moreys got a new neighbor and landlord.  Immigrant Nathan A. Cushman purchased the building and not only moved his family in, but established a branch of his bakery, N. L. & L. A. Bakers in the ground floor.   The other location was on Amsterdam Avenue.  Among his employees in the Columbus Avenue shop was William Meyer, a recent immigrant from Switzerland.   Meyer studied hard for his citizenship examination and Cushman gave him time off from work to appear before Justice Smyth downtown on May 6.  The judge was astonished at Meyer’s answers.  The World noted that “nearly every applicant for final citizen’s papers stumbled upon some of the simple questions in the science of government which were put to them by the dignified Justice.”  The newspaper explained that the complexities of Congress and the Senate, the branches of Legislature, and nuances of state government could be tricky to newly arrived residents.  Yet Meyer quickly and correctly answered each question.

Unable to trip him up, the judge asked, “Did you read the Constitution of the United States in night school?”  Meyer replied that he had not but had read it in a newspaper.  The World reported “After thanking the Justice, the new citizen hurried back to his bakery shop at 242 Columbus avenue, congratulating himself that he had passed his examination so smoothly.”

Daniel Morey took a break from his wife’s dressmaking business on the hot afternoon of August 3, 1898.  Bicycling was a tremendously popular pastime and the 30-year old joined three friends, Robert and his wife Millie, and Robert Dore on a bike ride to Coney Island.  They arrived there at around 2:00 and spend “an enjoyable hour seeing sights, then decided to go in bathing,” according to The Brooklyn Daily Eagle.  Beaches had precautionary “life lines” that stretched along the water several yards from the shore.  They not only marked a safe distance in which to remain but provided something to grab onto if a swimmer ran into trouble.

Morey was a powerful swimmer and ignored the life line, going well past it into the surf.  Half an hour later his friends had lost track of him.  “A search along the beach proved fruitless, and while the party was still searching, joined by other bathers, the man’s body floated in on the waves.  It was washed up on the beach, and then the dreadful truth was known,” said The Brooklyn Daily Eagle.

The New York Herald suggested that “Overheated and exhausted, he took dinner and went at once to the ocean.”  The newspaper said that resulted in the fatal attack of cramps.  But The Sun had an alternative explanation.  “When he checked the bicycle, he received check No. 13,” it reported ominously.  Morey’s body was transported back to his apartment.

Mary K. Morey was by far not the only resident to work from her apartment.  Another was Italian-born Madame Tocci Dramis.  Her advertisements in 1899 touted her “piano and vocal school; wonderful progress; highest testimonials, Italian method.”  And in 1906 Otto Devere, who lived in the second-floor apartment, advertised “Massage, scientific treatment, chronic nervous diseases, operator pleasing personality; engagements either residence [meaning the client could either come to him, or he would make a house call].”   On January 31, 1909 Mrs. Dunbar advertised her “Manicuring Massage for Ladies” from her apartment. 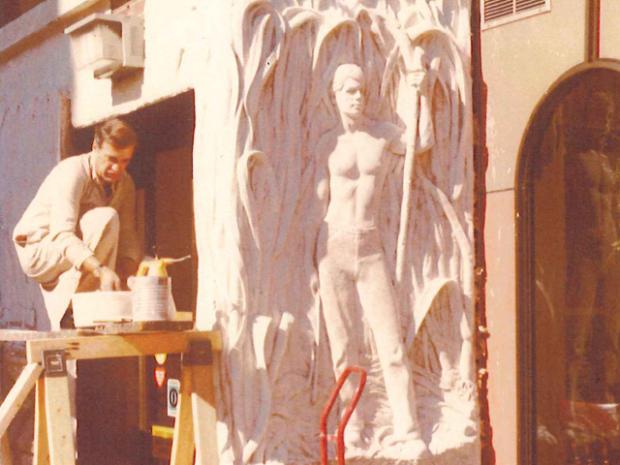 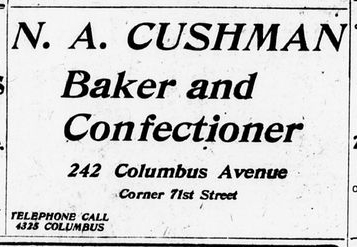 A resident who definitely did not work from home in 1912 was Maxine Mead, a Broadway chorus girl.  She stepped off the curb at Broadway and 45th Street on the night of March 9 that year, only to be run down by Joseph McAleenan’s automobile.  The Sun reported “Mr. McAleenan jumped from the automobile and when he saw that Miss Mead was badly hurt he lifted her into the machine and told the chauffeur to drive to Roosevelt Hospital.”  It would be a while before Maxine would be hoofing it on stage.  Her right shoulder was dislocated, and her head badly cut.

An eight-room apartment was apparently more than one resident, named Kane, needed in 1919.  He subleased a “clean, sunny front room, suitable [for] two” for $3.  His ad stressed that the building had steam heat.  The rent would equal just under $45 a week today.  The arrangement apparently worked out because he advertised the room again the following year.

The tenant list seems to have degraded somewhat by 1925 when 23-year old Thomas McCarro and 25-year old John Russo lived here, possibly sharing an apartment.   At 3:00 on October 31 that year Patrolman Michael Hurley was in the ferry station on the Staten Island side when he noticed the young men running from the ferry which had just docked.  He stopped them for questioning when Diego Alfonso, a sailor on the Standard Oil Company’s Augusta rushed up and identified them as the pair that had just robbed him of a gold watch at $50.  They were arrested on first degree robbery charges.

The N. A. Cushman Bakery would remain in the Columbus Avenue store into the 1920’s.  The space received a major updating in 1963 when it was converted to a restaurant and the upper floors divided into three apartments each.

“A search along the beach proved fruitless, and while the party was still searching, joined by other bathers, the man’s body floated in on the waves.  It was washed up on the beach, and then the dreadful truth was known,” said The Brooklyn Daily Eagle.

The new restaurant was Victor’s Café, opened by Victor de Corral, a Cuban émigré born in Guanabacoa, Cuba in 1922.  He opened a restaurant in and around Havana before immigrating to New York with his family in 1957.  Victor’s Café specialized in what The New York Times called “robust Cuban food” and quickly became a destination spot.

In 1972, De Corral remodeled the restaurant, moving the door from the northern end to 71st Street.  At the same time, he commissioned Cuban-born artist Arturo Martin Garcia to create a bas relief mural on the exterior walls surrounding the entrance.   The work, which cost De Corral the equivalent of $190,000 today, is inherently Cuban in theme.  It depicts a scene on a sugar plantation with buffalo and a bare-chested laborer among the tall sugar cane.

In 1995, Penang Malaysian Cuisine opened in the space.  While The New York Times’ food critic Eric Asimov appreciated the menu, saying it was “notable for its fresh, intensely spiced and flavored Malaysian food,” he was not a fan of the atmosphere.  “From the supercilious host to the uncomfortable seats crammed too close together, it is evident that this restaurant is dedicated more to packing in customers than to satisfying diners.”

When owner Greg Hunt prepared to open the wine bar Café Tallulah in the space in 2012 he alarmed locals by announcing he intended to remove the “eyesore”—the 40-year old sculptural mural by Arturo Martin Garcia.  Preservationists fought back, taking their case to the Landmarks Preservation Commission.  But, only a day before the Commission’s scheduled vote, Hunt relented and said that, instead, he would illuminate it at night.

Café Tallulah made way for the Oxbow Tavern in 2018.  Owner Tom Valenti named it after the oxen portrayed in the outside mural.  The eatery did not last especially long, closing in 2020.

In the meantime, Thom & Wilson’s 1884 flat building shows its age.  The cornice was lost decades ago and the brownstone front on 71st Street and the brick façade on the avenue have been painted over.  But the handsome neo-Grec lintels of the windows recall a period when only three families at a time called the building home.

Shop local to support the business currently at 240-242 Columbus Avenue: