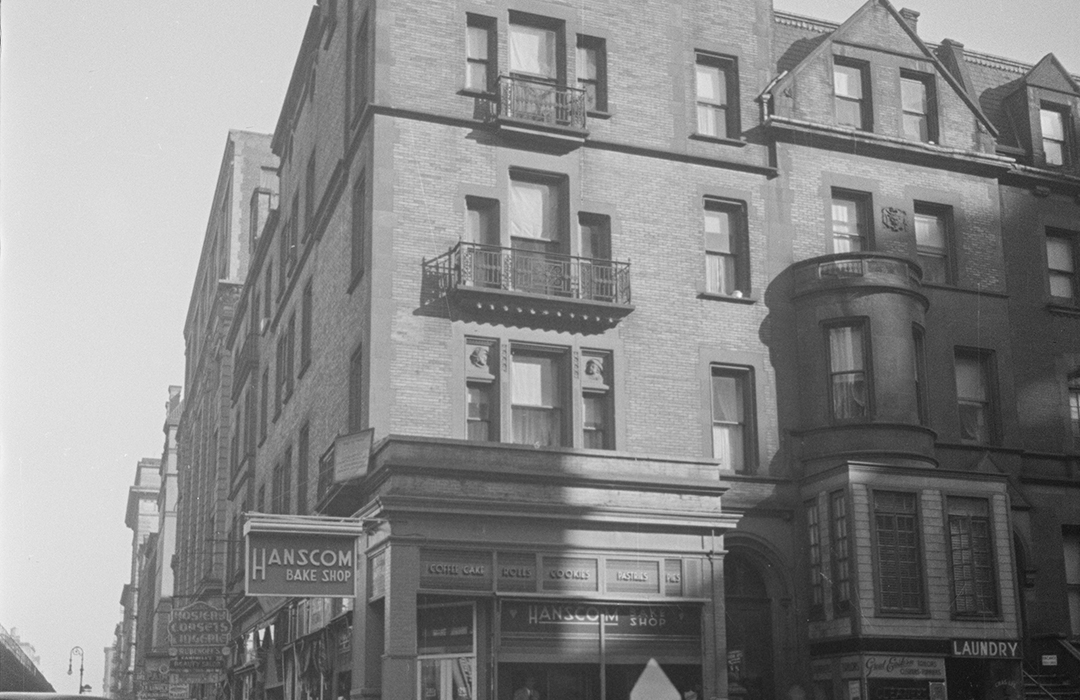 Edward Cabot Clark, having amassed a fortune through his partnership with Isaac Merritt Singer who founded the Singer Sewing Machine Co., turned to real estate development in the 1870’s.

In 1880, the two joined forces on a massive undertaking, the upscale Dakota Apartments on Central Park West between 72nd and 73rd Streets.  As the German Renaissance Revival style building went up, in 1882 Clark put Henry Janeway Hardenbergh, (who had apprenticed under the German-born immigrant and architect Detlef Lienau) to work on another ambitious project.  On June 24, The Real Estate Record reported “Mr. Edward Clark will go on at once with the erection of the twenty-six houses on the north side of Seventy-third street, between Eighth and Ninth [later Columbus] avenues…Mr. Clark will also erect a five story flat house, with stores, on the northeast corner of Ninth avenue and Seventy-third street.”

Like the 26 private houses, Hardenbergh designed the apartment building in the German Renaissance Revival style to harmonize with The Dakota.  Completed in 1884, it–like The Dakota–was faced in yellow brick and trimmed in brownstone.  The entrance at 67 West 73rd Street sat above a short stoop and the façade was decorated with balconies and Renaissance inspired details like carved portrait busts.  The roofline rose and fell with gables and peaks.

Among the first of the well-to-do residents was the family of Russell Pratt Hoyt.  His varied resume included being general manager of the Traders’ and Traveller’s Accident Insurance Company, secretary of the Mercantile Benefit Association, President of the Folding Trunk Company, and superintendent of the commercial travelers’ department of E. S. Jaffray & Co.  On January 1, 1888, The New York Sun said of him, “He is naturally a busy man.”

Hoyt was born in Manchester, Vermont in 1842 where his family now maintained their summer home.  He and his wife, the former Ellen Amelia Millet, had three children, Frances Millet, Grace Louise and Russell, Jr.

Harriet S. Totten and her son, George Smith Totten, were neighbors of the Hoyts.  Harriet’s husband, Colonel George Muirson Totten, who died in 1884, had been an internationally renowned engineer, responsible for, among other major projects, the construction of the Panama Railroad.  He had been fired while supervising the Panama Canal project because his “figures seemed preposterously high.”  But he was exonerated by facts.  The New York Times later said, “The scandal that followed showed the wisdom of his calculations.”

[Resident] Russell Pratt Hoyt [was] general manager of the Traders’ and Traveller’s Accident Insurance Company, secretary of the Mercantile Benefit Association, President of the Folding Trunk Company, and superintendent of the commercial travelers’ department of E. S. Jaffray & Co.  On January 1, 1888, The New York Sun said of him, “He is naturally a busy man.”

Harriet had traveled with her husband wherever his building projects took him.  While he was stationed in Panama, she busied herself with writing.  The New York Times noted, “many of her appreciative sketches of Central American and later of South American life were received with favor by Northern readers.”  The couple’s frequent stays in Washington had led to her close friendships with President Martin Van Buren, Francis Scott Key, and Daniel Webster.

The financial status of the families was reflected in the educations of their sons.  In 1891, George Totten was attending Columbia University’s School of Law, and two years later Russell P. Hoyt, Jr. was a student at Columbia.  (He would enter Charles Scribner’s Sons publishing firm following graduation.)

John G. Smedberg and his wife were residents at the time.  He was an engineer and surveyor, and Mrs. Smedberg was highly visible in charitable causes.  Perhaps her favorite was the Orphan Asylum Society in the City of New York, which was located not far away on West 73rd Street between Riverside Drive and West End Avenue.  At least from 1890 to 1892 she served as its secretary.

By the first years of the 20th century, the Hoyt children were grown and extremely popular in Manchester summer society, especially for the theatrical entertainments they staged.  Russell, Jr. was perhaps as talented vocally as his sisters.

The annual summer theatricals became an anticipated event.  On August 25, 1904, The Argus noted “The Misses Hoyt, of New York, will give a vaudeville performance at Music hall Saturday evening.  This will consist of songs in costume and other specialties.  They will be assisted by the Columbia College quartet, which is led by Russell P. Hoyt.” 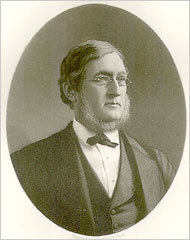 Rent for a corner apartment in 1901 was $1,200 a year—the equivalent of $3,100 per month today.  Among the residents at the time was the family of Harry Allen.  Caroline Gratia Allen was about to start her freshman year at Barnard College, and Harry, Jr. was studying Chemistry and Physics at Columbia University.

In 1902, the Clark Estate installed new storefronts designed by architect George H. Griebel.  For years, the northernmost space had been ticket office of the New York Central Railroad.

Russell Pratt Hoyt died on November 29, 1905 but his family would remain in the apartment for years to come.  Their names were listed annually in Dau’s Greater New York Blue Book (the directory of New York high society) with their 73rd Street and Manchester residences.

Families like the Hoyts, Tottens and Allens, of course, had domestic help.  Anna Peincrainger, one of the housemaids who worked in the building, headed home on the night of March 11, 1909.  She had gone only a block when she was assaulted by Arthur Schmitt.  Her screams attracted a policeman, and the three went off to Night Court.  There Anna told Magistrate Kernochan that Schmitt “hugged her once beside the old Park wall.”  Schmitt declared it was an accident.  Nevertheless, he paid the $10 fine.

As the years passed, the unmarried Hoyt sisters turned their musical talents from amateur to professional.  On October 28, 1915 the Musical Courier reported, “Frances and Grace Hoyt announce the reopening of their studio, 67 West Seventy-third street, where they give piano, violin and vocal instruction, with special attention to English diction.”  The Hoyts remained in the building at least through 1919.

The Clark Estate retained possession of the building until 1921 when it was sold to Nicolas C. Partos, president of the Partola Mfg. Co.  Within the year architect Harrison G. Wiseman had added a floor which successfully did away with Hardenberg’s charming peaks and gables, extended the storefront on the 73rd Street end, and renovated the once upscale suites into “non-housekeeping apartments,” meaning there were no kitchens.  The Department of Buildings demanded that “not more than two families cooking independently on premises” were permitted.

There were now five, rather than four, stores in the building.  Through the 1920’s the northern store was home to Campbell’s Beauty Shop, which offered Jazz Age treatments like the “permanent waving oil process,” “expert finger and water waving,” and hair coloring in all shades for $5.  In 1943, the Municipal Dye Works leased the corner store, and by 1951 it was home to the Arden Radio Store.

Anna Peincrainger, one of the housemaids who worked in the building, headed home on the night of March 11, 1909.  She had gone only a block when she was assaulted by Arthur Schmitt.  Her screams attracted a policeman, and the three went off to Night Court.

In the fall of 1963, the jewelry store at 281 Columbus Avenue was the target of burglar John Sedlak.  A drug addict, he had been arrested at least 40 times in the past 32 years.  Police told a reporter from the Daily News that “he is a heroin ‘mainliner’ and needs $50 daily to finance his dope habit.”  Detectives had been following him for five days on October 7 when “they caught him with $20,000 worth of jewels and furs in a jewelry store at 281 Columbus Avenue.”

The neighborhood had turned trendier in the last quarter of the 20th century when funky shops like Great Gatsby vintage clothing store opened in 287 Columbus Avenue in 1973.  In 1976 it was replaced by Anita’s Chili Parlor, but the void was filled by a similar shop, the Second Coming, which opened in 283 Columbus Avenue.  Like Great Gatsby, it specialized in 1930’s and ‘40’s clothing.

Next door to Second Coming, at 281 Columbus Avenue, Only Hearts opened in February 1978.  Helena Stuart had started collecting hearts around 1966 at the age of 15.  Now she owned a store that sold only heart-shaped items.

In 1980 a renovation resulted in six apartments (once again with kitchens) per floor and storage rooms in the top floor.  Anita’s Chili Parlor and Only Hearts would remain in their spaces toward the end of the 1980’s.

The tradition continues–more or less–with a Japanese Restaurant engulfing 285 and 287 Columbus Avenue, an Indian restaurant next door at 285, and a fruit and vegetable market on the corner.  In between is a commercial art gallery.

Although the ground floor and roofline of Henry J. Hardenberg’s German Renaissance building have been brutalized, pausing a moment is worthwhile to take in the quaint details which survive.

Shop local to support the businesses currently at 281 Columbus Avenue: