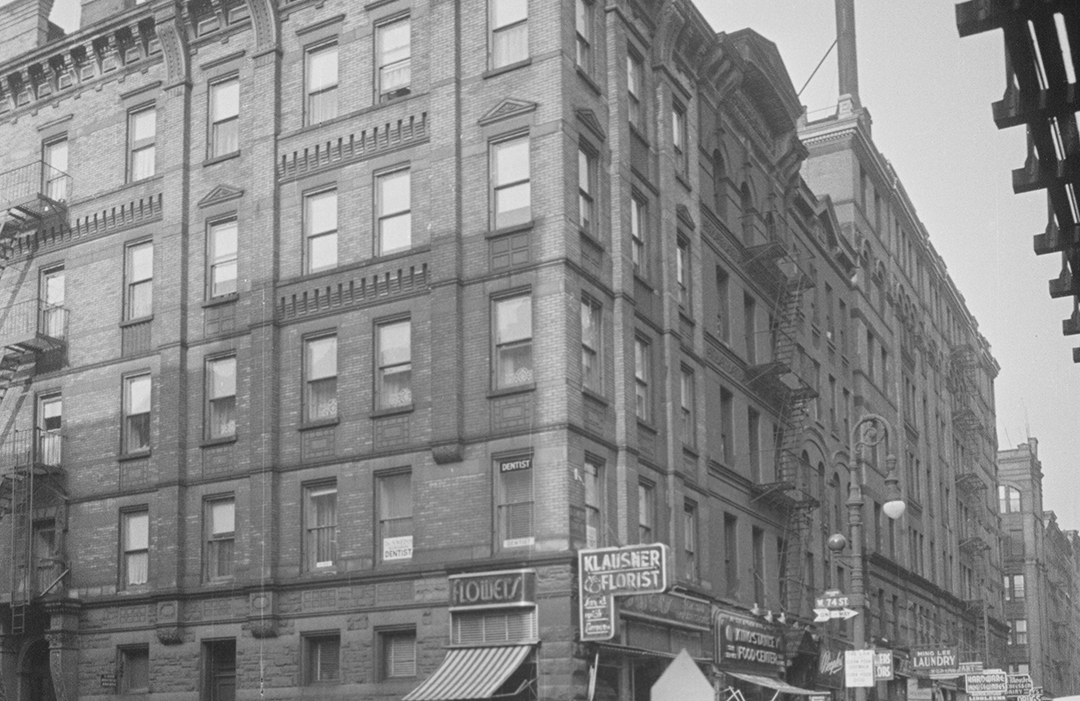 Blind Bets at The Grayling

On November 22, 1888, an auction sale of what was called “The Jones Estate Block” was held downtown.  The undeveloped land sat between Ninth Avenue (later Columbus Avenue) and Amsterdam Avenue, from 74th to 75th Street.  The Real Estate Record & Builders’ Guide reported “Never was such a sight seen in the annals of real estate as the eager, hustling, excited crowd that thronged to overpouring the Liberty street salesroom.”  The first plot to be sold was at the northwest corner of Columbus Avenue and 94th Street.  Michael Giblin paid $32,150 for the property which, said the Record & Guide, “is to be improved by the erection of a very handsome apartment house.”

One month later, to the day, the Record & Guide reported that architect George A. Bagge had filed plans for a five story “flat and store.”  He projected the cost of construction at $40,000, bringing the total cost of the project to $1.97 million in today’s money.

Overall Bagge turned to the currently popular neo-Grec and Queen Anne styles.   The storefront would face Ninth Avenue with the residential entrance located above a dog-legged stoop at No. 101 West 74th Street.

Construction did not begin until early in 1889 and was completed before year’s end.  Bagge faced the ground floor in rough-cut stone interrupted by planar bands.  The frieze below the shallow cornice at this level was decorated with simple panels resembling eight-paned windows.  The stone supports of the brick piers above wore floral designs, each slightly different.  Bagge stepped away from the overall style by embellishing the stoop and entrance with Renaissance Revival carvings.

The yellow brick upper floors were modestly ornamented with more window-like panels and occasional triangular pediments.  A prominent metal cornice with over-sized brackets at each of the brick piers completed the design.  Giblin called his new flat building The Grayling.  The apartments within were spacious with seven or eight rooms plus bath.

In August 1889, Giblin leased the store to the catering firm Louis F. Mazzetti.  The annual rent was $1,800, about $4,225 per month today.  Upon the death of its founder two years earlier The New York Times had called Louis Mazzetti “a master of the mysteries of the cuisine.”  The business was now operated by his brother, Antonio C. Mazzetti.

An 1887 graduate of University of Virginia, he operated his medical practice from the apartment with seemingly luxurious hours.  The 1895 Medical Directory of the City of New York listed his address as “The Grayling” and his office hours as “10 to 12 and by appointment.”

Among the residents at the time was Dr. Carter S. Cole.  An 1887 graduate of University of Virginia, he operated his medical practice from the apartment with seemingly luxurious hours.  The 1895 Medical Directory of the City of New York listed his address as “The Grayling” and his office hours as “10 to 12 and by appointment.”

Cole was a respected member of the medical community and a member of several related societies.  He routinely published papers and articles, such as his “Ulcers of the Leg: All Can Be Cured” published in Scientific American on November 23, 1895.

Like Cole, the other residents were professionals.  In 1900, they included Robert Nelson Kenyon, an attorney; Nathan M. Garland, a “general agent” with the Manhattan Electric Light Co. and his wife; and lawyer George A. Heaney.

A fire broke out in The Grayling in 1911.  The family of Herman L. Gruneck was trapped in their apartment but were saved by the heroics of a man in the adjoining building.  Four years later, their rescuer, Henry Frantry, faced a judge for allegedly having stolen a $25 watch.  Gruneck appeared in the courtroom on January 15, 1915 to appeal to the judge on his behalf.  He stood and said:

My name is Herman L. Gruneck of No. 101 West Seventy-fourth street, and I am a haberdasher.  I can’t believe Frantry robbed this man.  He saved the lives of my wife, my baby, my brother and myself in a fire in my home in 1911, showing exceptional courage. We were living on the fourth floor and were cut off. We had either to jump to the street or die in our rooms.  We were almost suffocated when this man climbed across a ledge and passed the four of us to another man in the next house. 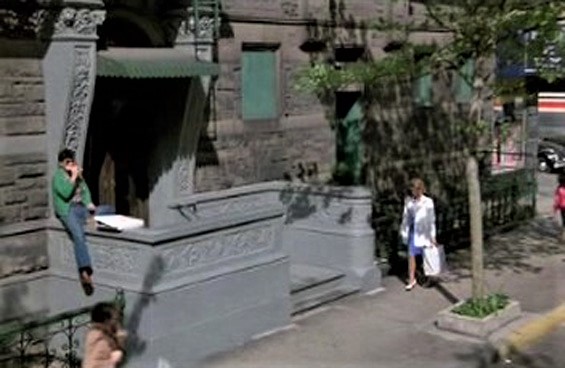 "Two of a Kind" Film Still with Olivia Newton John

Judge Crain was moved by Gruneck’s story.  He turned to the convicted prisoner and said, “There must be a great deal of good in you.  The maximum is fifteen years in Sing Sing, but I will send you to Elmira [reformatory].  If you behave you can get out in eleven months.”

The early 1920’s saw a few residents straying from the straight and narrow.  Among them was William H. Chapman who was a walking delegate of the Plumbers’ Union.  He found himself in the sight hairs of the Lockwood Commission in 1920.

Labor unions in the early 20th century were often influenced or controlled by gangsters.  The Lockwood Commission had been formed in 1919 to investigate renting and building conditions in the city.  Investigators discovered corrupt landlords charging usurious rents, and labor unions colluding in a racket that inflated housing costs.  On December 11, 1920 the Record & Guide reported that William H. Chapman “was charged with extortion” by Lockwood Committee officials.

The New York Herald reported that the 45-year-old was being held on $50,000 bail–more than a quarter of a million dollars today.  His attorney tried to get the bail reduced, pleading that “his client did not appear to be any more than remotely connected with the alleged affair.”  He did not bother to pretend Chapman was not involved.

Stephen H. Butts was in handcuffs on June 2 that same year.  The 21-year-old, who was employed as a clerk, had stolen $2,000 worth of jewels from a home at No. 325 West 90th Street with his accomplice, 23-year old Warren Goffe.  Getting access to the residence was simple since it belonged to Goffe’s parents.

The blind man ran a profitable bookmaking business on the side.  He took bets on the races in his innocent-looking newsstand.  But it caught the attention of Detectives Saylor and Fitzgerald who loitered about the stand on November 20 in plain clothes.

Butts was lucky.  At their hearing two days later Magistrate Frothingham was forced to dismiss the case when Goffe’s father, failed to appear to press charges.  The Evening World said it all in its headline “Fails to Prosecute His Son.”

Another Grayling resident would be arrested two years later.  Fifty-nine year old John Hurley was beloved in the neighborhood.  He was blind and ran a newsstand below the elevated railroad two blocks to the south at Columbus Avenue and 72nd Street.  The Evening World said on November 21, 1922 “the news dealer has long been known to police as a man of wealth.  It was generally accepted, however, that his business was lucrative.”

And it was–just not the newspaper part of it.  The blind man ran a profitable bookmaking business on the side.  He took bets on the races in his innocent-looking newsstand.  But it caught the attention of Detectives Saylor and Fitzgerald who loitered about the stand on November 20 in plain clothes.

After two customers placed bets with him, the detectives moved in and arrested Hurley and his patrons.  “Then they waited inside his little stand until another customer came,” reported The Evening World.   In all four arrests were made.

In 1946, The Grayling received an alteration resulting in just two apartments per story above the first floor.  Four decades later the building received its few moments of fame when it was used as the setting of the apartment of Olivia Newton John’s character, Debbie, in the 1983 motion picture Two of a Kind.

Shop local to support the business currently at 300 Columbus Avenue: