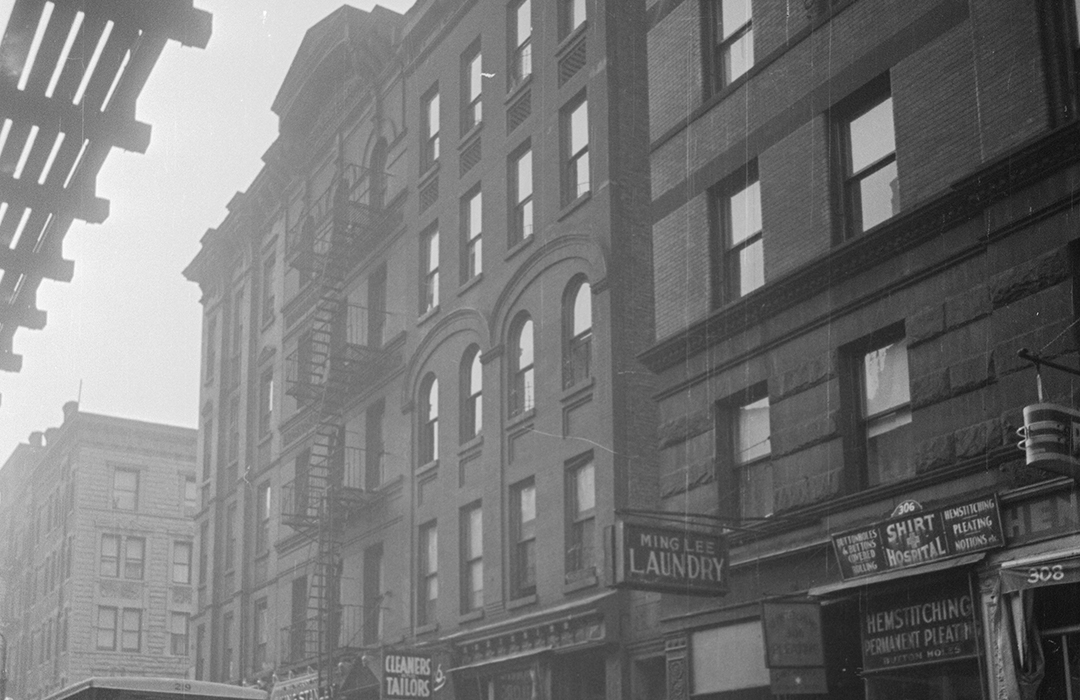 On June 22, 1889, the Record & Guide mentioned that developer Michael Brennan “intends to build a five-story flat and store on 9th avenue, between 73d and 74th streets.”  The Upper West Side was experiencing a building boom at the time, so the only thing surprising about the announcement was Brennan’s choice of architects.  Oscar Tolhurst was based on the opposite side of the continent–in Seattle.  Exactly how the two men came to work together is puzzling.

Tolhurst’s tripartite design featured a cast iron storefront, a two-story mid-section defined by two large arches, and a two-story upper section with dog-toothed brick panels.  A triangular pediment within the pressed metal cornice announced the date of construction.  There were two apartments per floor above the commercial space.

In 1890 Mary D. Spencer opened her combination florist and confectionery shop in the newly completed building.  A widow, she was self-sufficient and enterprising.  The 1891 History and Commerce of New York said, “A few years ago she was engaged as a money broker, and a year ago she initiated her present enterprise at No. 304 Columbus Avenue, as a dealer in cut flowers, floral designs and decorations, plants, etc.”  Victorian décor relied heavily on plants and flowers and Mary not only sold but rented plants—like palms and ferns—for occasions like weddings and funerals.

The “confectionery” section of the store, according to the History and Commerce of New York, was “furnished with a handsome soda fountain for supplying summer or winter drinks according to the season,” as well as stocking the “high-grade Huyler’s” chocolates.

George Head rented the basement for his carpenter shop.  At around 11:00 on the night of December 1, 1893 fire broke out there.  John C. Lavin, who worked at the Home Burglar Alarm Company nearby, noticed smoke arising from the cellar.  He and the company’s night watchman, Edward Donnelly, rushed into the building “as far as they could into the hallway and shouted ‘Fire! Fire! Wake up, for God’s sake!’,” according to The World.  “Then Lavin, without waiting to learn the effect of his warning, ran at top speed to the corner of Columbus avenue and Seventy-third street, and sent in an alarm.”

By the time she left the apartment, the smoke was suffocating and blinding.  She became disoriented and frightened “and fell on the landing.”  She and her child had to be carried out by the fire fighters.

In the meantime, the tenants had begun pouring into the smoke-filled hallways.  The article said that only about two minutes after the men had discovered the smoke, flames had burst through to Mary Spencer’s florist and confectionary store.  “The fire spread rapidly, and hardly had its glare been seen in the rear of the hallway before the whole store was ablaze.”

With Mary’s store in flames, the tenants were unable to escape to the street.  And so, they went upwards to the roof.  “Eight families lived there,” said The World, “but all managed to escape to the roof except Mrs. B. Clark and her child, who lived in the third flat.”  Mrs. Clark and her young child had been asleep.  By the time she left the apartment, the smoke was suffocating and blinding.  She became disoriented and frightened “and fell on the landing.”  She and her child had to be carried out by the fire fighters.  When the fire was extinguished, miraculously, no one had been seriously injured.  The fire damage was repaired, and life resumed as it had.  Mary Spencer even reopened her store.

Among the tenants in 1895 were the Schwartz family.  The couple’s son, Louis A. Schwartz, received starling news that year.  Schwartz was born in Manchester, England on July 23, 1869.  The New York Press said, “His father was a carpenter then in poor circumstances, and when his mother died shortly after his birth, he was adopted by a Mrs. Sarah Schwartz.  Twenty-three years ago, she came to America to join her husband, who had preceded.  Shortly before she sailed, she heard that her adopted son’s father had gone to Liverpool and had died there.” 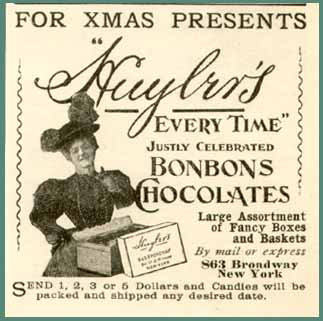 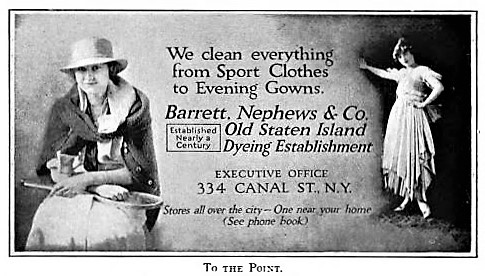 Louis grew up in New York and went into the dry goods business, “where he prospered,” according to the newspaper.  He was unaware that he was adopted and the Schwartzes “did not undeceive him.”  But then, in April 1895, Louis ran into a boyhood friend named Appleton from Manchester whom he had not seen in 25 years.  They had a long chat and when Appleton went home, he naturally told his wife about the chance encounter.  She had a visitor, Mrs. Baum, who jumped up saying, “I have been looking for a nephew who was adopted long ago by a Mrs. Schartz in Manchester.  Can they possibly be the same ones?”

Mrs. Baum rushed to the Schwartz apartment and the truth came out.  “His aunt said then that his father was not dead, as reported, but was the owner of a big lumber yard in Manchester.”  Louis also discovered he had two brothers, Simon and Davis, one of whom lived in Philadelphia and the other in Chicago.  “If he succeeds in finding them, they will all go to England to see their father,” said the article.

Harvey P. Spencer, presumably Mary’s son, was minding the confectionary store on the night of January 23, 1896.  He went into the stockroom at around 8:00 and when he returned, he found four teenagers “engaged in looting the store,” as reported by The Sun.  “They had stuffed their pockets with candy and two were reaching for some boxes which stood on a shelf behind the counter when Mr. Spencer made his appearance.”

Rather than flee, the hooligans turned on Spencer, pelting him with his own candy and throwing goods around the store.  “Then they made a charge, and Spencer was getting the worst of it when a policeman appeared and attacked the boys in the rear.”  They appeared before Magistrate Simms and pleaded their youth, saying they were “only having some fun.”  The judge was not moved and told said “it was about time to let them understand” that just because they were boys they would not get off with a lecture.

Rather than flee, the hooligans turned on Spencer, pelting him with his own candy and throwing goods around the store.  “Then they made a charge, and Spencer was getting the worst of it when a policeman appeared and attacked the boys in the rear.”

Mary Spencer’s shop remained in the space until about 1898, when it became the J. F. Ward & Co. art gallery.  That was followed in 1902 by Barrett, Nephews & Co.’s dyeing business.  The firm was known as the Old Staten Island Dyeing Establishment and had 25 other branches in Manhattan.  It would remain for several years.

The residents continued to be upper middle class and, like the Schwartz family, several of them were immigrants.  John Trainor, for example, was born in Ireland.  He lived here in 1916 when he became engaged to Annie Firzzell, also an Irish native.

A renovation completed in 1961 resulted in a total of 14 apartments.  Instead of two per floor there were now four each on the second and fifth, and three each on the third and fourth.

In the early 1970’s the store was home to the A-1 Furniture Shop.  The store handled “estate” (or second-hand) furniture.  In its September 9, 1974 issue New York Magazine said it had “an ample if undistinguished stock.”

It made way for the vintage clothing store, The Second Coming, by 1977.   That shop was replaced in 1983 by Bernard’s, a boutique that sold “comfortable, easygoing clothing for young women with a taste for the latest fashions,” according to Anne-Marie Schiro, writing in The New York Times on July 22, 1983.

In the first years of the 21st century, the Australian-based dancewear firm Bloch opened a store here.  It sold leotards, dance pants, footwear for ballet, tap and jazz, and dance-related apparel.  Today the store is home to Jonathan Adler, a home furnishings store.  A laundromat is in George Head’s former carpentry shop.

Shop local to support the businesses currently at 304 Columbus Avenue: