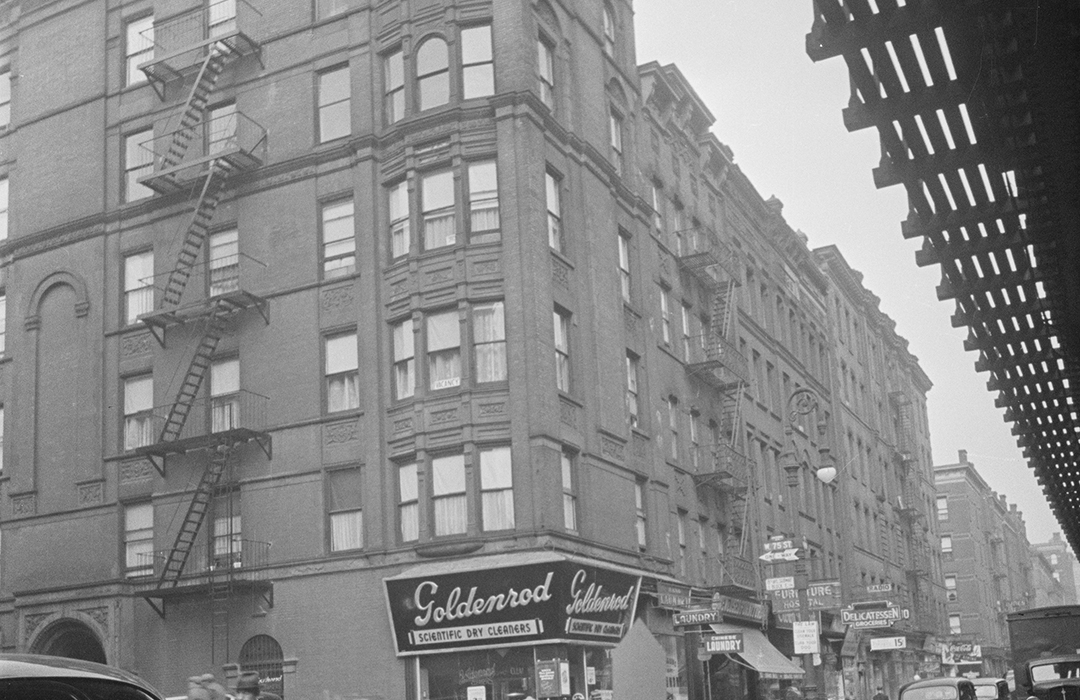 Christmas is for the Dogs

In November 1888 what would be remembered as “The Jones Sale” of real estate took place.  It was later recalled as “a notable event in the history of Manhattan realty, on account of the choice location of the properties.”  Of the 100 vacant plots on the Upper West Side to be sold by the estate of Joshua Jones, developer Cornelius W. Luyster purchased six on West 74th Street, and another on the northwest corner of Ninth Avenue (later renamed Columbus Avenue) and 75th Street.  He paid the equivalent of $732,000 today for that lot.

Luyster hired the architectural firm of A. B. Ogden & Son to design what would be called The Lawrence—a six story apartment building with a corner store.  The Real Estate Record & Guide called it “an important building” and noted it would have cutting edge amenities like an elevator and steam heat.  The architects married two dissimilar styles, Queen Anne and Romanesque Revival, to create a somewhat quirky, yet attractive structure faced in yellow brick, brownstone and terra cotta.  Completed in September 1889 it cost Luyster $65,000, or about $1.83 million today.

The residential entrance, located at 101 West 75th Street, sat above a short, broad stoop within a stone arch.  Squat medieval-like clustered columns and crouching dragons within the spandrel panels drew directly from the Romanesque style. On the upper façade, flowery terra cotta panels, an offset blind arch with no apparent purpose, and two cast metal angled bays at either end reflected the Queen Anne influence.  A pressed metal cornice originally topped the design.

The most celebrated resident of The Lawrence was among its very first.  Joshua Lawrence Chamberlain had begun his career a college professor in Maine before joining the Union Army.  He was awarded the Medal of Honor for his gallantry at Gettysburg, attained the rank of brigadier general, and was elected Governor of Maine following the war.  He wrote a letter to Major General Oliver Otis Howard from his apartment here on February 17, 1891, offering to represent the state of Maine at the funeral of General Tecumseh Sherman.

The young woman carried a “chatelaine bag” in which was jewelry valued at about $3,000 in today’s money. Just as she walked from the bank a man “sprang to her side, and seizing the chain, gave it a wrench,” as reported by a newspaper. Janet had tightly twisted the chain around her finger, so he was unable to snatch it.

Italian immigrant Marcel Pompeo leased the corner store for his catering business.  He was well known throughout the city and operated two other such stores on Sixth Avenue.  The Pompeo catering shop would remain until about 1896.  The store was then taken over by two brothers from Germany.  Given that they sold fruits and vegetables, their surname was amusingly ironic.  Dan and Gus Hamburger operated under the business name of D. & G. Hamburger.  The Hamburger produce market remained in the space just past the turn of the century.

In the meantime, the apartments in The Lawrence were home mostly to well-educated professionals like Homer H. Pennock, who was in the insurance business; and Thomas O. Wheelwright, secretary of the New York chapter of the North American Society of Engineers.  The financially comfortable status of the residents was reflected in the attempted robbery of Janet A. Edwards in July 1902 as she left the Second National Bank.

The young woman carried a “chatelaine bag” in which was jewelry valued at about $3,000 in today’s money.  Just as she walked from the bank a man “sprang to her side, and seizing the chain, gave it a wrench,” as reported by a newspaper.  Janet had tightly twisted the chain around her finger, so he was unable to snatch it.  As he bolted down Fifth Avenue she screamed “Stop, thief!” prompting Patrolman Mulcahy to take chase.  The New York Press said he was soon “followed by a crowd of almost 200 persons, crying “Stop, thief!”  The would-be crook, James Harp, was headed off by another crowd that had been alerted by the commotion.  “He was taken to court at once,” said the article.

Mrs. Katherine C. Fay and her daughter, Irene, were figures in Upper West Side society.  The Sunday Telegraph announced on October 1, 1905, for instance, that “Mrs. Katherine C. Fay and her daughter will receive October 1 at the Lawrence, 101 West Seventy-fifth street.”  Irene’s marriage which took place not long after that was short lived and she returned to her mother’s apartment in the Lawrence, using the title “Miss” although keeping her married name, Ackerman. 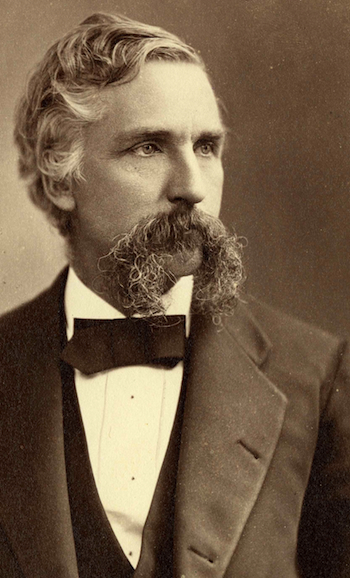 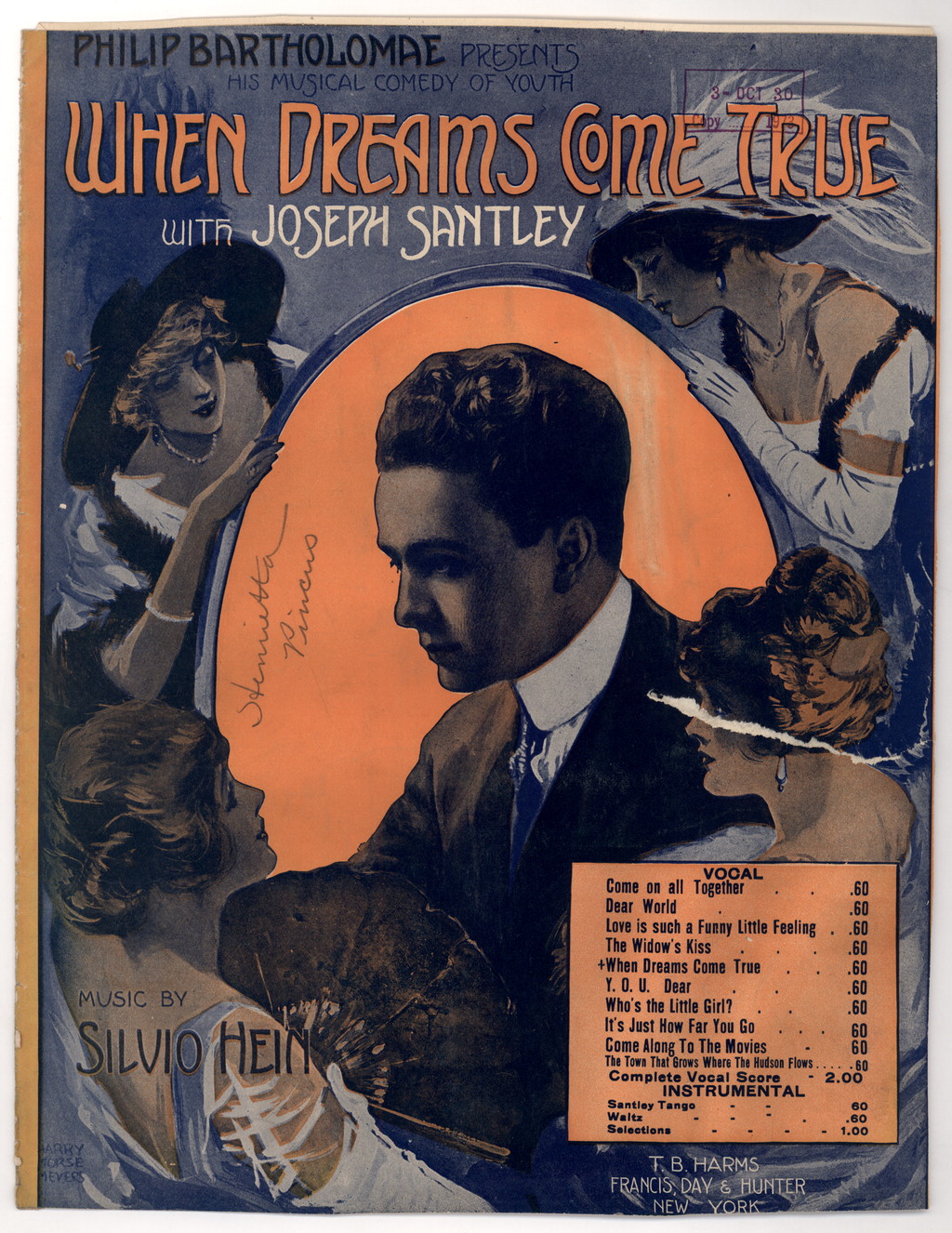 But it was not their social standing for which Katherine and Irene were noted.  It was for their nearly neurotic attachment to Katherine’s dog, Teddy.  The New York Herald called the Skye terrier “one of the best jumping dogs in the world.  He was valued at $1,500 and had won blue ribbons at several shows.”  The dog caught a cold in April 1908, which worsened to pneumonia, causing his death.   Terry was taken to an undertaker where he was laid out in a satin-lined coffin marked with a silver name plate.   The New York Herald said on May 6 “several friends went to the undertaking establishment yesterday to take a last look at Teddy.”   Following the funeral Teddy’s remains were taken to a dog cemetery Upstate where Katherine Fay erected a marble obelisk over his grave.

Teddy was replaced by Chump who was the guest of honor at a Christmas reception every year at least through 1914.  Katherine and Irene would invite about a dozen canine guests, the Christmas tree was decorated with doggie edibles, and every dog received a Christmas present.  The parties were reported in detail by various newspapers each year.

There were residents from the entertainment field in The Lawrence as well.  Composer Silvio Hein lived here in 1908 when he married actress Anna V. Mooney on June 17.  Hein had composed his first opera before he was 20 years old and would go on to write numerous musical comedies.  He was a founder of the American Society of Composers, Authors and Publishers, better known today as ASCAP.

Katherine and Irene Fay would invite about a dozen canine guests, the Christmas tree was decorated with doggie edibles, and every dog received a Christmas present.  The parties were reported in detail by various newspapers each year.

In thinking of the newcomers to America at the turn of the last century, one thinks mostly of Germans, Irish, Italians and other Europeans; rarely if ever Afghans.  But in 1911 the corner store was leased to S. S. Momand for his electrical supply shop.  Momand would do business from the Columbus Avenue corner until 1915, when it once again became the “Delicatessen & Fancy Groceries” store of M. A. Bort.   By 1925 it was the Delmonico Market.

The broad diversity of residents continued.  In August 1920 an apartment was leased to Mme. Antoinette Kohlicak; and in 1925 John Boubonus took an apartment.  The move would land him in court after his father sued him for leaving home.  On November 27 The Daily Star reported that Charles Bourbonus, who lived in Astoria, “said the son recently left him and failed to support him.”  John left court that afternoon after agreeing to pay his father $6 a month.

Irish immigrant James Egan’s music store was in the store during the first years of the Depression.  When the Monoghan Men’s S. & B. Association planned to hold a social and dance on May 9, 1931, the Irish community newspaper The Advocate advised “Tickets are on sale at James Egan Music Shop, 320 Columbus avenue.”

Renovations on the building were done in 1955 which resulted in a second store space at the opposite end of the building.  Upstairs there were now four apartments per floor.  It may have been at this time that the cornice was removed.

The changes in the Columbus Avenue neighborhood in the last quarter of the century were reflected in the two shops.  Over the years a series of restaurants were here—Ticker’s Steak House in the early 1980’s; Mughai Indian restaurant from about 1997 through 2008; and in 2009 Dive 75 opened in the western storefront.  What You Need to Know Before You Travel to New York said in 2017, Dive 75 “isn’t as divey as you would expect from the name, but offers a large menu of drinks, board games, and you drink your beers out of a fish tank.”

Shop local to support the businesses currently at 320 Columbus Avenue:

HOSTING THEY WERE HERE BANNER!