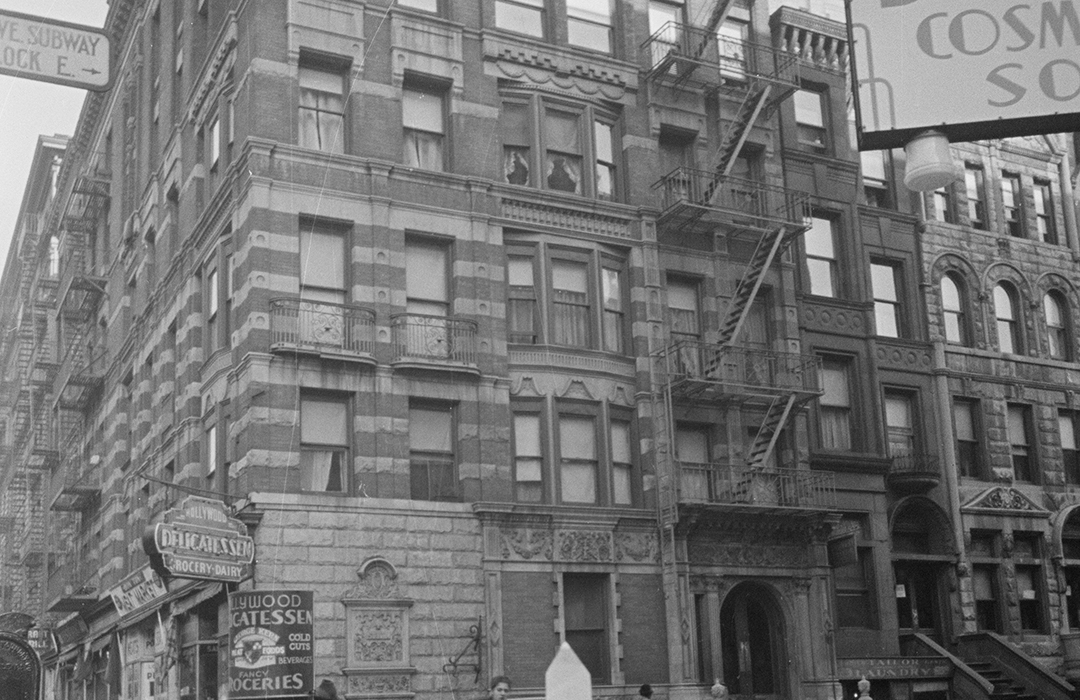 Little Modesty at The Sylvia

In 1889 developer Frank L. Fisher commissioned architect Edward L. Angell to design a “flat and store” building at the northeast corner of 76th Street and Columbus Avenue.  Called The Sylvia, it was given a tripartite Renaissance Revival design and completed the following year.  The residential entrance to the building was on West 76th Street.  It sat above a stone stoop and was flanked by polished columns, which upheld an elaborately carved entablature.  Affixed to the façade, a few feet from the corner, a decorative stone plaque announced the building’s name amid a profusion of Renaissance inspired carvings.

There were 15 apartments in The Sylvia–ranging from six to eight rooms and a bath each.  The ground floor along Columbus Avenue housed commercial spaces.  The initial commercial tenants were Milton Schnaier’s plumbing business at 347-359 Columbus Avenue, and a paint store in 345.  An advertisement in The World on March 21, 1895 sought “Boy Wanted, 15, to learn paint business.  Apply 8 A.M. 345 Columbus ave.”

The location was exceedingly convenient for Milton Schnaier who lived upstairs.  In 1894, he hired a bookkeeper, Jacob Recht.  The young man seemed to work out–at least for four years.  Then, on December 9, 1898, the Brooklyn newspaper the Times Union, reported that Recht had appeared in the Tombs Police Court “charged with embezzling $2,100 from his employer, Milton Schnaier, a plumbing contractor at 347 Columbus ave.”  It had been discovered that for the entire period of his employment he had been “systematically falsifying his accounts.”  The total of Recht’s pilfering would equal about $66,800 today.

Schnaier’s neighbors in The Sylvia were for the most part respectable professionals, like Deputy Assistant District Attorney Charles E. F. McCann, and Professor L. A. Baralt, a member of the psychological section of the Medico-Legal Society.

Press coverage normally revolved around social issues.  On April 19, 1896, for instance, the New York Herald reported that Mr. and Mrs. Charles Anthony Geoghegan, who had been married in St. Lawrence’s Church on Park Avenue and 84th Street a month earlier, “have sent out cards for Thursday afternoons and evenings during April and May.”  (“Cards” announced when socialites could call).  The article noted, “Mr. and Mrs. Geoghegan are living at the Sylvia, No. 59 West Seventy-sixth street.”

A fight broke out in the lobby over a poster depicting Hope in her revealing costume, which several men tried to steal.  The Morning Telegraph explained on February 28, 1901, “When Miss Booth learned of the episode, she felt that the admirers deserved to know her.  She, therefore, made an appointment with them.  The result was that she was introduced to other clubmen and a hastily arranged private dinner party was scheduled for Saturday night.”

But the limelight became a bit more scurrilous after actor James E. B. Earll and his wife, the notorious actress Hope Booth, moved in following their marriage in 1895.  Hope, who claimed to be related to Shakespearean actor Edwin Booth, was known more widely for wearing little or no clothes than for her acting abilities.  In 1896, at the age of 23, she appeared at the Casino Roof Gardens in an act entitled “Ten Minutes in the Latin Quartier; or A Study in the Nude.”  She and the manager of the theater were promptly arrested.

Hope was performing at the Howard Athenaeum in February 1901.  A fight broke out in the lobby over a poster depicting Hope in her revealing costume, which several men tried to steal.  The Morning Telegraph explained on February 28, 1901, “When Miss Booth learned of the episode, she felt that the admirers deserved to know her.  She, therefore, made an appointment with them.  The result was that she was introduced to other clubmen and a hastily arranged private dinner party was scheduled for Saturday night.”

The gentlemen’s dinner party was held in a private dining room in a hotel.  “She had just attired herself in a set of silk fleshings prepared to impersonate Venus, when a bellboy burst hastily into the room with the announcement that a rumor of the proceedings had reached the street, and that everyone had better leave at once,” said the article.  Hope escaped in a bathrobe.  The Morning Telegraph reported “Miss Booth was seen at her apartments, 59 West Seventy-sixth street, yesterday, and admitted there was considerable foundation to the story” (except she insisted she had worn “silk fleshings” and was not nude as the rumors said).

Real trouble in the Earll-Booth household began two months later.  A telegraph boy named Julian Goldy was walking Earll’s “big brindle bulldog” on April 29.  It got away from him and “twice sank his teeth in the calf” of Charles C. Reilly in the grassy grounds of the Museum of Natural History.  The New-York Tribune reported “At the hospital he was told that his wounds were exceedingly dangerous.  He was advised to go to the Pasteur Institute.”  Reilly demanded that the bulldog be destroyed.

The Morning Telegraph mused, “But for this animal, no skeleton would have been dragged from Miss Booth’s closet and rattled yesterday in the halls of justice.”  That was because James E. B. Earll had been summoned to court on July 15 to explain why he had ignored a previous summons, the consequences of which could now be $5,000.

Earll insisted he had never been served a summons.  But a process server took the stand and recounted how he had appeared at The Sylvia apartment, and when the man in the Booth apartment refused to accept the summons, he threw it at him and left.  Earll protested, saying “He never served me.  Who could it have been?” 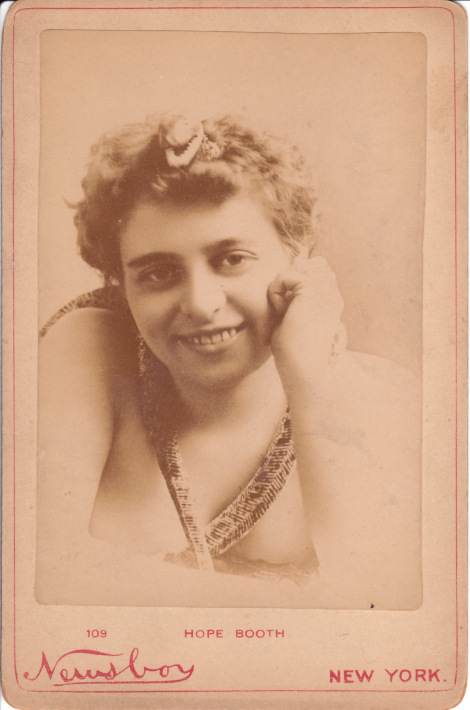 And then, the circumstances dawned on everyone in the courtroom.  The Morning Telegraph ran the headline, “Who Was The Man?”  It seems that in Earll’s absence, Hope was entertaining someone else.

To deflect guilt, Hope sued her husband for divorce, claiming that he “registered in the Hotel Bartholdi on January 18 with a woman whose name is unknown to her.”  She attested that “He enjoyed an income of $55,000 a year and often receives rich presents in money from his mother, who is worth from $700,000 to $1,000,000.”  In reporting on the procedures, The Morning Telegraph said, “she believes she has been the most persecuted of all women.”

But there was more woe in Hope Booth’s future.  On June 16 The Morning Telegraph said, “Miss Hope Booth, whose greatest delight in life is to poise coyly on the tip of a papier mache moon, clad only in such raiment as the statues demand, arose from a long siege of illness yesterday to find she had sustained an awful loss.”  Hope had been given an automobile by “a millionaire coal merchant.”  Her monogram was inscribed in silver on both doors.  But that morning the car had been repossessed.

“The blow was too, too much for the embryonic star.  She took to her bed.  What with a divorce action pending against James E. B. Earll, her husband, and other domestic troubles, this last shock made the camel’s burden many pounds overweight.”

But Hope bounced back.  Following her divorce, she married drama critic Renold Wolf on February 4, 1903.  Her story ended sadly, however.  She was committed to a sanitarium in Italy in 1909 and could not return home until friends wired money.  She divorced Wolf the following year and died in a hotel on Third Avenue in 1933, not having left her room for years.

In the meantime, The Sylvia continued to be home to white-collar residents, many of them in the legal field, like George F. Lyon, a special deputy clerk in the court system, and city magistrate Nathan Klein, here for several years beginning around 1912.

Rudolph Diamant moved in in 1917.  The well-paid accountant was a member of the American Statistical Association.  He decorated his apartment with original art, and when the Society of Independent Artists staged its sixth annual exhibition in the Waldorf-Astoria in March 1922, he brought home two paintings–Martin J. Jackson’s Independence Day, and Racers by Margaret M. Law.

By then the stores at street level had, of course, changed.  Milton Schnaier & Co. was taken over in 1919 by Harry Vurman’s plumbing business, 349 was home to the D. & W. Luggage Shop and 341 housed a delicatessen.

The car lurched backwards and plunged five stories down the elevator.  Dorfman was extricated from the wreckage by a police emergency squad and was taken to the hospital with multiple fractures and internal injuries.  The Daily News reported that he “is dying in Flower hospital as a result” of the accident.

On May 1, 1924 three gunmen, Arthur Cawley, Salvatore Orlando, and Gerald Pantusco went on an armed robbery spree, hitting the Columbus Avenue deli and a drug store a block away at Columbus and 74th Street in the process.  As they fled the pharmacy, they encountered three policemen and a gun battle erupted.  Two of the robbers were apprehended, but 21-year old Arthur Cawley was shot to death.

Resident Ruben Dorfman was involved in a bizarre and perhaps humiliating accident on the day after Christmas in 1932.  The 45-year old had parked his sedan on the fourth floor of a garage on West 68th Street four weeks earlier.  Now, it refused to start.  The New York Times said, “He tinkered with the machine for half an hour, during which period the operator of the vehicle elevator came and went with other machines.”

Dorfman’s relief when the engine finally turned over was short-lived.  The car lurched backwards and plunged five stories down the elevator.  Dorfman was extricated from the wreckage by a police emergency squad and was taken to the hospital with multiple fractures and internal injuries.  The Daily News reported that he “is dying in Flower hospital as a result” of the accident.

The Excellent Food Shop occupied 347 Columbus Avenue in the mid-1940’s.  In June 1947, an armed robber, James Ford, made off with $48 in an early morning holdup.  At the time, there was one customer in the place, 60-year old Louis George.

In an amazing instance of déjà vu, a month later, on July 12, Louis George was again the only customer in the restaurant at 2:15 a.m. when Ford returned.  The gunman took the $12.25 that was in the register, then, turned to George.  When he did not produce pocket money fast enough for the thief, “the thug kicked him,” according to the Daily News.  “Reeling, George’s hand fell on an icepick.  George grabbed it and stabbed his assailant in the side, chest and neck.”

The wounded crook ran out the door but was knocked down by a passerby.  Arrested, James, was taken to the Bellevue Hospital prison ward and charged with assault and robbery.

A renovation to The Sylvia completed in 1976 resulted in six apartments per floor.  The project obliterated Edward L. Angell’s striking 76th Street base, including the elaborate entrance.  The whole was re-faced with artificial stone that attempts to mimic the original.  Thankfully, the marvelous carved plaque was preserved.

Dobson’s restaurant moved into the ground floor and would remain until 1989 when The Gap took over the space.  It was later home to Putumayo, another clothing store, and a Design Within Reach before in 2015, Peruvian Connection opened its boutique in No. 341 Columbus Avenue.

Shop local to support the businesses currently at 341-349 Columbus Avenue: