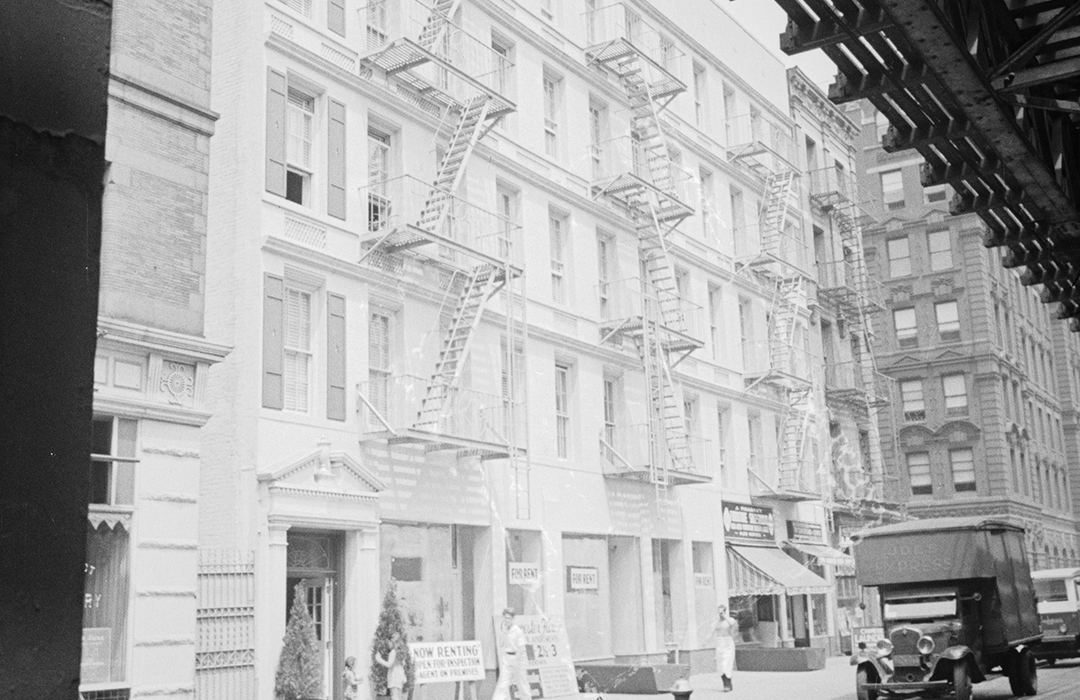 View of the west side of Columbus Avenue between 77th and 78th Streets looking north c. 1940; Courtesy NYC Municipal Archive

The architectural firm of Cleverdon & Putzel was prolific in the Upper West Side in the last decades of the 19th century.  Their houses, apartment buildings and commercial structures were most often lavishly adorned with decorative elements of the Renaissance Revival, Beaux Arts or Queen Anne styles.

In 1887 they designed a “double flat” (essentially two apartment buildings designed to appear as one) which straddled the three plots at 370 through 374 Columbus Avenue between 77th and 78th Streets.

Stores occupied the ground floor spaces, the northern most of which became home in 1892 to W. A. Matthews & Co., real estate and insurance agents; by 1898 the southern store was W. R. Flagge & Co.’s grocery store.

At around 6:45 on the evening of March 5 a tenant on a lower floor called for fire fighters.  A fire had started in the Kearns apartment.  Families gathered up their children and rushed for the fire escapes and hallways.  The Buffalo Evening News reported “The fire fighters came quickly enough, but the flames had gone upward and spread out on both sides of the building before they got there.”

The Kearns family managed to get out, and Martin Connellan and his wife escaped down the fire escape in the rear.  As they did so, two firemen were scaling up.  They implored them to save their two children (which they apparently had left behind).  The Duluth Evening Herald reported, “The men rescued the little ones but made no search for other occupants of the flats, knowing of none.”  All the families milled about in the street, watching the fire fighters work on the blaze.

The Buffalo Evening News wrote that the Connellans “had got out in a big hurry and amid great confusion, and it was supposed that Mrs. Kennelly had found shelter with some of the neighbors.”  But by 9pm when no one could find her, firemen went back into the smoldering scene to look for her.  “They found her in a doorway and burned to a crisp,” said The Buffalo Evening News.

After the damage was repaired, The Grandview continued to attract Irish immigrant families.  Among them was the McCabe family who lived here in 1901.  On April 9, seven-year old John McCabe was playing in Manhattan Square Park across the street as construction for the foundations of a new building was taking place nearby.  Blasting through the bedrock at the turn of the last century was a dangerous practice and houses and stores often suffered damage as chucks of stone hurled through their windows or even their roofs.  A particularly powerful explosion happened that evening. 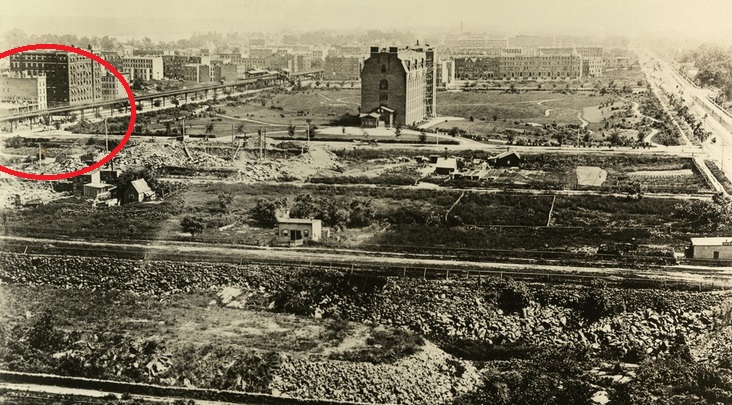 This block in 1887 just before these buildings went up, replacing lower "taxpayer" 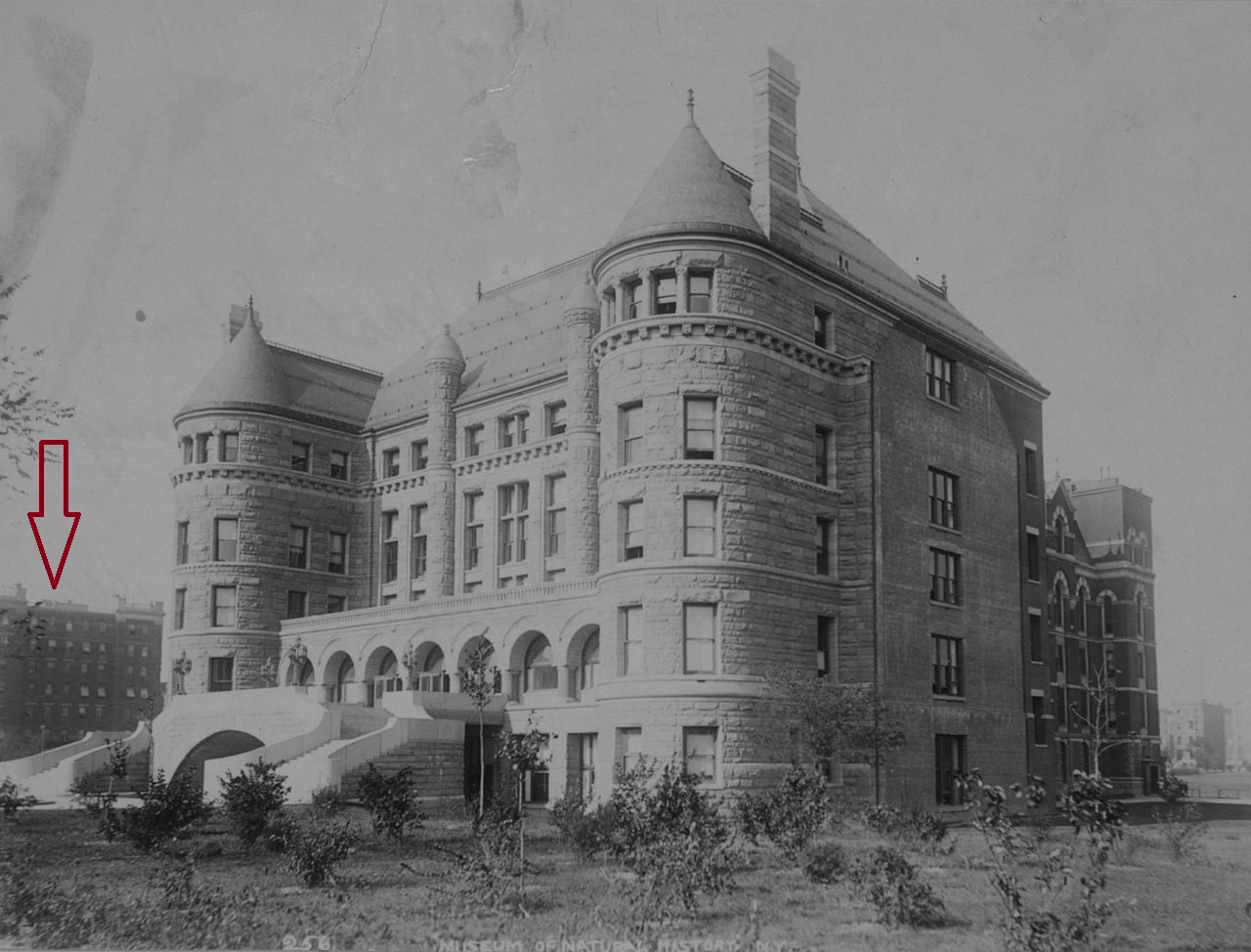 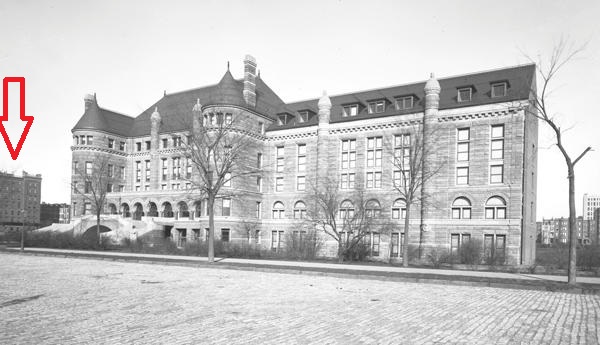 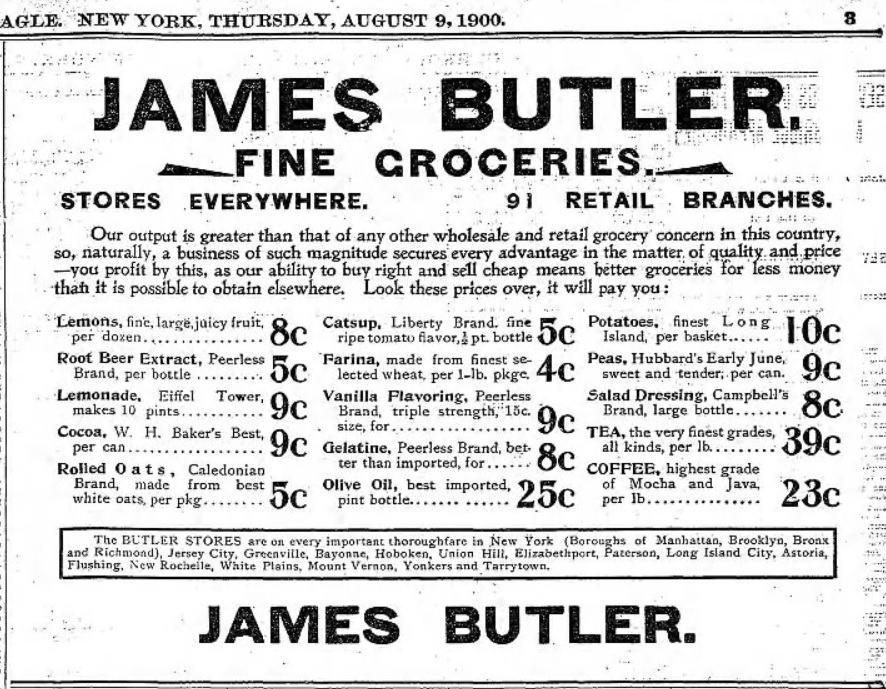 In 1900 there were 91 James Butler Grocery Stores 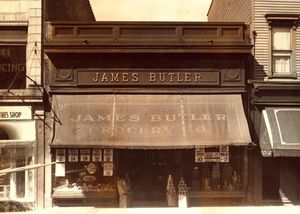 A James Butler Grocery Store in Queens similar to that on Columbus Ave.

“So great was the force of a blast at Seventy-ninth street and Columbus avenue yesterday evening that a cab in the avenue was struck by several stones, windows were broken in a flat 100 feet away and a boy…had to be taken to Roosevelt Hospital,” reported The New York Press.  The boy was little John McCabe.  He suffered a broken left leg, contusions of the body and shock.

“So great was the force of a blast at Seventy-ninth street and Columbus avenue yesterday evening that a cab in the avenue was struck by several stones, windows were broken in a flat 100 feet away and a boy…had to be taken to Roosevelt Hospital”

At the time one of the shops held Mme. Hodes’ hairdressing salon, while the other was the grocery store of Respoli Brothers.  Later, beginning around 1909 the northern shop was home to the N. Ottenstein shoe store for several years.  By the 1920’s it housed the James Butler Grocery store, one of a chain.

In February 1936 the building suffered what the New York Post described as a “spectacular fire.”  It may have been the significant damage that prompted the owners to do an overwhelming renovation which was begun in 1939 and completed the following year.  Architect Joseph M. Berliner stripped off all of Clevedon & Putzel’s 19th century decorations (other than the brownstone bandcourses between floors) and the cornice.  He gave the building a veneer of red brick and installed three stores in the now-featureless structure.

Edith’s Nostalgia, described as an “Art Deco flea market” was in 370 Columbus Avenue in the 1970’s; followed by Mythology in 1979.  The store was described by New York Magazine as “an unclassifiable shop…that is filled with graphics, old and new toys, and curiosities ranging from a harmonica in the shape of a crab to Japanese ink stamps showing scenes of lovemaking.”  Mythology remained into the 1990’s.

Two shops were combined into one in 2005 when Gary Columbus, a Japanese restaurant, opened.  It was described by Not For Tourists Only as “Why UWS sushi snobs no longer have to take the cross-town bus.”

Shop local to support the businesses currently at 370-374 Columbus Avenue: