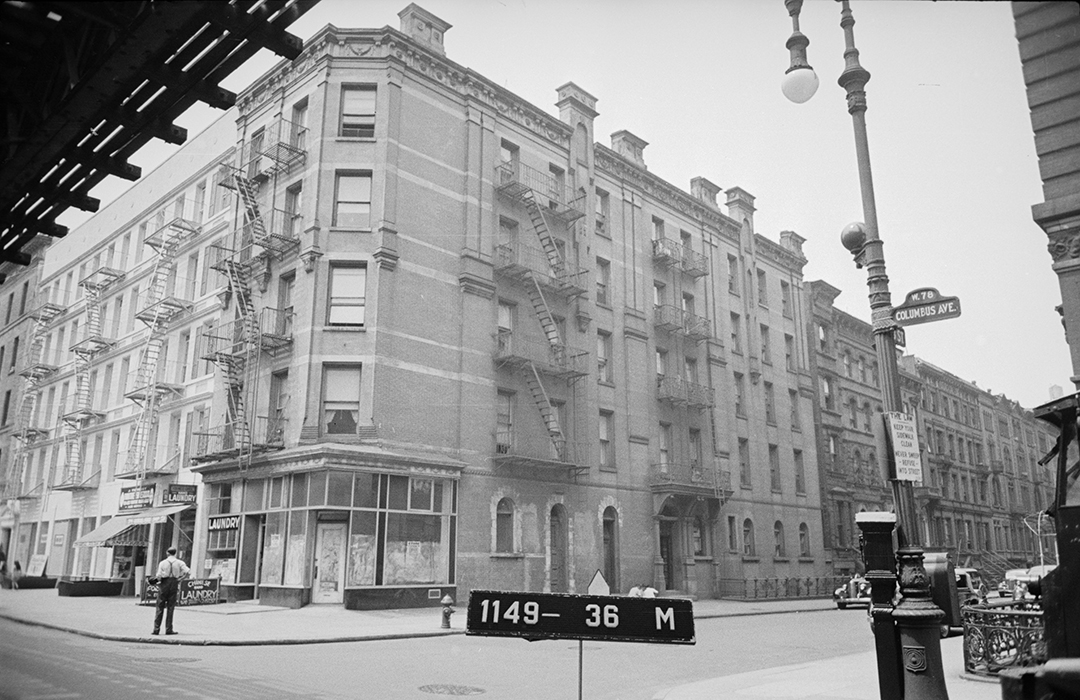 Hot Soda at The Volunteer

Charles H. Bliss owned a contracting company in the last quarter of the 19th century.  In 1886, he and his brother, Frederick, commissioned the architectural firm of Thom & Wilson to design a five-story flat building at the southwest corner of Columbus Avenue and 78th Street with a store on the ground floor.  Bliss’s construction company, obviously, erected the building.

Interestingly, the plot the architects had to work with was a normal residential lot—25 feet wide on the avenue and 102 feet deep.  They used the entire footprint for the building which was completed before the year’s end.  Faced in buff colored brick and trimmed in limestone, it cost the equivalent of $981,000 to build in today’s money.  Thom & Wilson blended the Renaissance Revival and Queen Anne styles, the latter especially noticeable in the ornate chimneys which sat above the complicated cornice.  By chamfering the corner, the architects gave additional light and ventilation to those rooms.

Called, oddly enough, The Volunteer, the building had just one sprawling apartment per floor.  Among the initial tenants were Frank MacArthur, a bright young lawyer, and his bride, who lived in the apartment on the fourth floor.  MacArthur was the son of former Judge MacArthur of the District of Columbia Supreme Court.  He had graduated from Harvard and joined a patent law office in Washington.  In 1886, he married Rose Winston, described by The Press as “a belle in Washington exclusive social circles” and “a remarkably beautiful woman.”  The newlyweds moved to New York and, according to The Press “went to housekeeping in a modest, but comfortable and well furnished flat at 100 West Seventy-eighth street.”  A baby boy, Malcolm, was born that year.

MacArthur opened his law office and things seemed to be going well until the spring of 1889 when Rose noticed Frank had “fits of melancholia.”  She consulted a doctor who told her that Frank was working too hard and smoking too much and prescribed complete rest.  The family first went to Atlantic City, then spent the summer in Nantucket.  “There Mr. MacArthur improved rapidly both physically and mentally until he was pronounced sufficiently well to return home and resume his practice,” reported The Press.

But one witness, according to The Sun, saw the couple arrive in a cab and when it stopped, “the man jumped from it and fell into the lake, while the screaming woman followed him to the bank.”

But on the afternoon of November 25, 1889 Frank and Rose went for a stroll in Central Park.  The Press reported “Mounted Policeman Michael J. Sweeney of the Central Park police with some difficulty pulled a well-dressed man out of the lake yesterday afternoon.  He was attracted to the spot by the cries of a lady who had evidently been with the man, and who stood crying on the water’s edge.”

Wearing his “overcoat, heavy clothes, and thick boots,” Sweeney had jumped into the lake.  The Sun said, “He got the drowning man to the shore, but it took the best efforts of three stalwart men to pull them out on to the bank.”  Frank was unconscious.  When he came to, he said he had fallen into the 12-foot deep water by accident.  But one witness, according to The Sun, saw the couple arrive in a cab and when it stopped, “the man jumped from it and fell into the lake, while the screaming woman followed him to the bank.”  Rose, who had refused to identify herself, slipped away from the commotion after the rescue.

Suicide or an attempt at suicide was shameful, scandalous and illegal in the 19th century, which no doubt explained Rose’s disappearance from the scene.  Later that evening a reporter knocked on the MacArthurs’ door.  Rose was brusque.  “My husband is at home and well, and there is nothing more to say.”  Later The Press recalled “she refused to talk about the matter, and almost succeeded in keeping it from public knowledge.”

Frank’s bizarre behavior worsened.  A day or two after the incident in Central Park he insisted on taking Malcolm on a carriage ride, despite pouring rain.  Rose humored him and accompanied them.  The Press reported “It was fortunate she did, because during the drive he became very violent, and threatened to throw his child out of the window.”

Rose contacted her father-in-law for help.  Judge MacArthur arrived in the city on November 30, 1889, took Frank to dinner and convinced him to spend some time in Washington.  He agreed and they set off on the New York and Washington Express the next morning.  The 35-year old Frank seemed fine on the journey.  When the train was about 15 miles north of Washington and going a full speed, he told his father he was going to a drink of water.  He rushed out onto the platform of the parlor car and threw himself from the train.  The Press reported, “The train was stopped and backed nearly half a mile, where his body was found horribly mangled.” 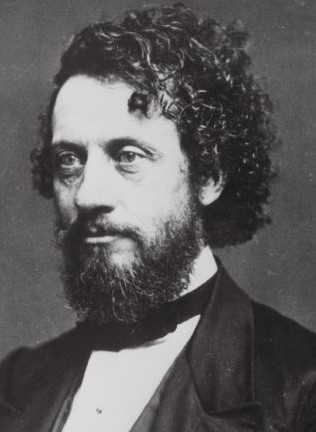 Former Judge MacArthur of the District of Columbia Supreme Court

In the meantime, the F. T. Dall & Co. pharmacy was occupied the store.  He added an attraction to his soda fountain in 1899.  The American Druggist and Pharmaceutical Record wrote, “The popularity of ‘hot soda’ seems to grow rapidly” and mentioned that F. T. Dall & Co. had installed a hot soda urn.  Hot soda drinks were especially popular during the cold winter months.

Tenants in the building continued to be professional, like Dr. Calvin L. Harrison, stockbroker James Dunbar, and G. J. Newton, and engineer with the Coast Line Telephone Company.

Dunbar’s name landed in the newspapers for an embarrassing reason in the fall of 1904.  The 38-year-old went to a respectable appearing rowhouse on West 82nd Street, which was in fact a high-end gambling establishment, which, early in the morning hours of November 4, was raided.  The World reported “A quantity of expensive gambling paraphernalia, including oak and mahogany outfits for playing faro, roulette, rouge et noir, and poker, as well as thousands of monogrammed chips, cards, etc., was captured.”  So was James Dunbar.  He and three other men were arrested.

A similar fate awaited Moses Phillips four years later.  Phillips, now retired, had been “formerly well known to New York club frequenters as a chef,” according to the New-York Tribune.  The 70-year-old picked up a part time job working in a gambling parlor not unlike the one Dunbar had frequented.  But when a Pittsburgh businessman, M. B. Moxley, went to the West 73rd Street rowhouse and became “victim of a crooked game of faro,” he went to the police and spilled names.  On the night of August 17, 1908 Police Captain Reidy “went to Phillips’s rooms at No. 100 West 78th street, and placed him under arrest,” reported the New-York Tribune.  He was charged “with being a common gambler.”

The World reported “A quantity of expensive gambling paraphernalia, including oak and mahogany outfits for playing faro, roulette, rouge et noir, and poker, as well as thousands of monogrammed chips, cards, etc., was captured.”

Early in 1921 James Wilson Dyce moved into an apartment here.  The 32-year-old had served in the Canadian Army during World War I and had a wife and child still in Canada.  Dyce had a murky background.  He had been deported back to Canada previously and had slipped back into the United States.  The Evening Telegram noted, “Dyce was also known under the name of James Wilson, Jay Gordon and Wilson Duncan.”  On February 1, 1921 the Department of Labor issued a warrant for his arrest.  He managed to escape detection until July 19 when he was spotted at the corner of Broadway and 79th Street.  There was suddenly a vacant apartment in the building.

By the time of Dyce’s second deportment the former pharmacy was home to Abraham Taxin’s leather goods store.  A young woman walked in on March 19, 1924 and pulled a gun on Taxin, making off with $75 (over $1,000 in today’s money).  A few days later she robbed a butcher shop on Ninth Avenue near 36th Street.

At mid-century the store had become the Caravan Rug and Carpet Cleaning Co.  In the meantime, the spacious apartments, still one per floor, somehow remained until 1970.  That year an announcement in New York Magazine entitled “An Unusual Concept for Living in the City” said the “builder and buyer share the expense of creating apartments of superior design on the West Side.”  Douglas Durst and Eli Zabar partnered to renovate the building into eight apartments—four triplexes and four duplexes.  The renovations were completed the following year, and while the interiors may have been of “superior design,” Thom & Wilson’s 1886 façade suffered regrettably.

The architectural details of the base were scrapped, and the façade slathered in a brown stucco type material.  The Queen Anne chimney tops, once one of the outstanding features of the architecture, were chopped off.  The once-handsome structure sits on a base that can only be described as an eyesore.