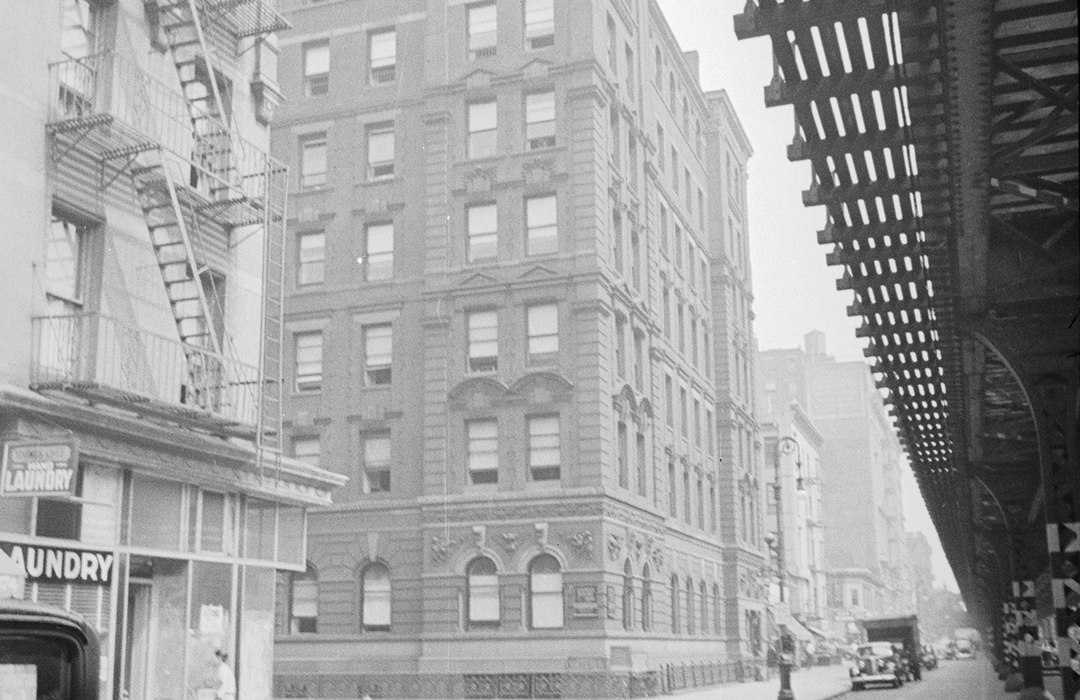 Emile Gruwe was born either in Belgium or in Dunkerque, France, on the border of Belgium.  It is unclear when he immigrated to the United States, but like many newcomers he quickly found success here.  In 1860 he was one of the two instructors of Architectural Drawing at the newly opened Cooper Union for the Advancement of Science and Art.  By the mid-1870’s he was half-owner of the Long Island Iron Works with engineer August Schweizer while also conducting his architectural practice.

James O’Friel had recently moved to New York City from St. Louis in April 1882 when the Real Estate Record & Builders’ Guide reported that he intended to build “a very elegant apartment house” on the northwest corner of Ninth Avenue (later Columbus Avenue) and 78th Street.  O’Friel hired Emile Gruwe to design what would be known as The Evelyn.

O’Friel’s building would cost $25,000 which, combined with the cost of the land, brought his total outlay to just under $7 million today.  Completed in 1894, Emil Gruwe unveiled a symmetrical red brick Renaissance Revival structure with corner pavilions capped with stone balustrades.  But the architect’s overall design was overshadowed by his details–the magnificent terra cotta embellishments in the form of angels, satyrs, putti and floral forms.

As was the case with most upscale apartment buildings, the ground floor included a restaurant.  It was not only a convenience for the residents, but a necessity for some.  An advertisement on January 21, 1900 offered “One 7-room Housekeeping and a few Non-housekeeping Apartments left.  Restaurant under management of John B. Schmitt, Late of Delmonico’s.”  The term “non-housekeeping” referred to the fact that those apartments did not have kitchens.

An advertisement on January 21, 1900 offered “One 7-room Housekeeping and a few Non-housekeeping Apartments left. Restaurant under management of John B. Schmitt, Late of Delmonico’s.” The term “non-housekeeping” referred to the fact that those apartments did not have kitchens.

In May 1905, new owner millionaire Henry Auchincloss hired architect William Allen Balch to do $10,000 in “extensive improvements.”  Included was a complete overhaul of the plumbing system and the installation of a new entrance in the northern pavilion on Columbus Avenue and a ground floor doctor’s office.

An advertisement in The Sun on October 28, 1906 warned “Only Two Apartments Left.”  Available were a three-room, one bath apartment for $720 and a two-room plus bath suite for $600.  The more expensive rent of the two would be equal to more than $1,680 per month today.  The ad noted, “Open plumbing, tiled bath, steam heat, electric light, hot and cold water, chambermaid service.”  The physician’s office, which included two rooms and a bath, rented at $750 per year and was taken by Dr. Daniel E. Coleman, who would remain for years.

The residents of The Evelyn’s 40 apartments appeared regularly in the society pages.  In 1907 the social register The Alcolm Blue Boo listed “Madame Pappenheim.”   The 55-year old diva had long been retired from the opera, but was well remembered.  In 1893 A Woman of the Century had said of her, “the United States is especially indebted to her for advancing the ideas of Wagner.”

On January 23, 1907 The Musical Courier announced “Eugenie Pappenheim will give her first musical afternoon of this season on Sunday, January 27, at The Evelyn…A very interesting musical program will be offered.”

Other hostesses that year included Mrs. Anna B. Wood, who gave a “Japanese euchre” in March.  The Times reported, “The prizes were won by Miss Bradley, Mrs. John A. Manson, William Douglas Sloane, and Charles Tallman.”  The article added, “The favors and decorations were all Oriental in effect” and said, “Mrs. Wood is at home on the first Monday of each month in the Evelyn.” 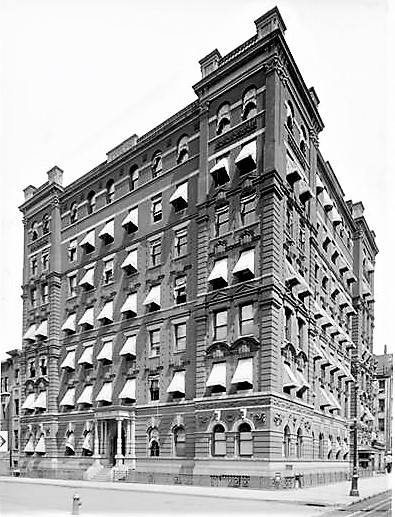 Image Courtesy Museum of the City of New York 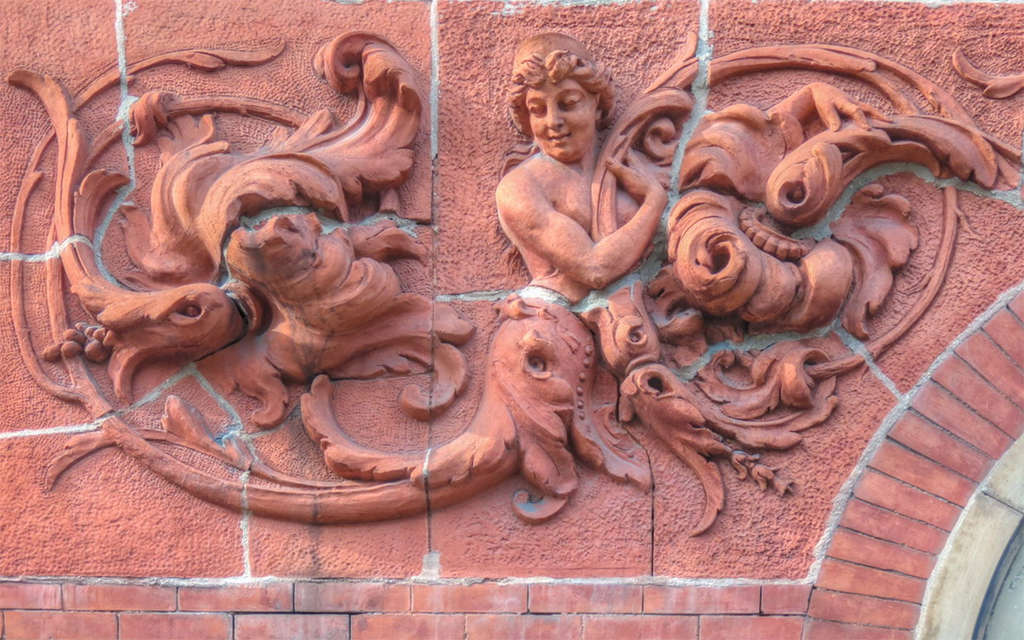 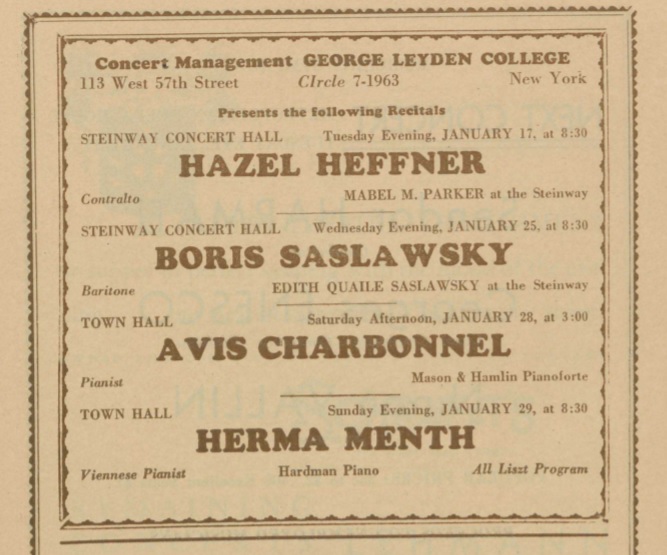 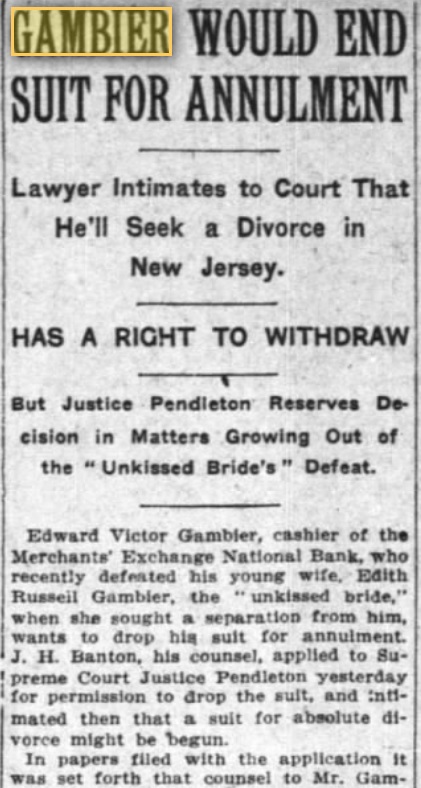 Residents Edward Gambier and his wife split very publicly in 1911

The family of banker Edward V. Gambier drew unwanted press attention through the years.  In 1910 he married Edith Russell of Atlanta but trouble ensued.  In 1911 he filed a suit for annulment; Edith responded with a suit for separation, claiming “he had kissed her only a few times since their marriage.”  The public admission earned her the sobriquet of “the unkissed bride.”  Both parties eventually withdrew their suits.

On January 6, 1914 Gambier arrived home to a scene of chaos at The Evelyn.  The Sun reported “members of his family told him that the valet was butting his head into walls.”  Gambier sent for a patrolman who “found a young man acting strangely” and had 21-year old Frederick Wendt removed to Bellevue Hospital where he was deemed insane.

In a vain attempt to avoid more embarrassing publicity, the Gambiers asked the police to “record the incident as happening in the house of ‘Mr. Patton,'” according to The Sun.  That did not happen and the following morning a humiliating headline read “Gambier’s Valet Insane / Husband of ‘Unkissed Bride’ Calls Police to Take Away Madman.”

Author Gertrude Hall lived in The Evelyn in the pre-World War I years.  She published novels, like The Unknown Quantity and April’s Sowing, and volumes of poetry while here.  She went on to marry for the first time at age 58 (to noted literary and art critic William Brownell) and lived until age 98.

Margaret E. McCann was notable for being the first woman to enter the brokerage business on Wall Street.  Unfortunately, that distinction took a backseat to scandal when she was arrested for running what today would be known as a pyramid scheme.  The $450,000 she owed clients when she appeared before a jury in March 1930 would equal more than $6.6 million today.

Margaret E. McCann was notable for being the first woman to enter the brokerage business on Wall Street.  Unfortunately, that distinction took a backseat to scandal when she was arrested for running what today would be known as a pyramid scheme.

During her two-day trial the 49-year old showed no emotion.  Not, at least, until the prosecutor summed up his case to the jury, saying “on her own testimony, Miss McCann is a thief.”  Margaret jumped to her feet and demanded “How dare you?”

Margaret was found guilty and sentenced to between five and ten years in prison.  On her way out of the courtroom she said, “I think the jury misunderstood the whole thing…What I did was to take money from some to pay others.”  She insisted she was “a victim of circumstances.”

Russian immigrant Boris Saslawsky and his family moved into The Evelyn in the mid-1930’s.  The baritone arrived in American in 1907 and his concerts focused mostly on the folksongs of his native country.  His wife, Edith Quaile Saslawsky (who had been his voice teacher in America) traveled with him as his accompanist.  Edith died about 1938 but Boris Saslawsky remained in their Evelyn apartment until his death in September 1955.

In 1987 the owners of the building proposed converting ground floor space into a store.  The plan galvanized Upper West Siders, who feared the alterations would threaten the elaborate terra cotta decorations.  During the fight that followed, the term “Evelyn’s Angels” became familiar in the neighborhood.  All of the terra cotta decorations survived the fray.  In 2015 a two-year renovation was begun which resulted in 23 “boutique condominiums.”  Aside from the building’s beautifully restored façade, very few original details remain, just the grand open lobby stairway with original stone, and fireplaces in some apartments. The penthouse apartment engulfs the entire top floor.

Shop local to support the businesses currently at 380 Columbus Avenue: