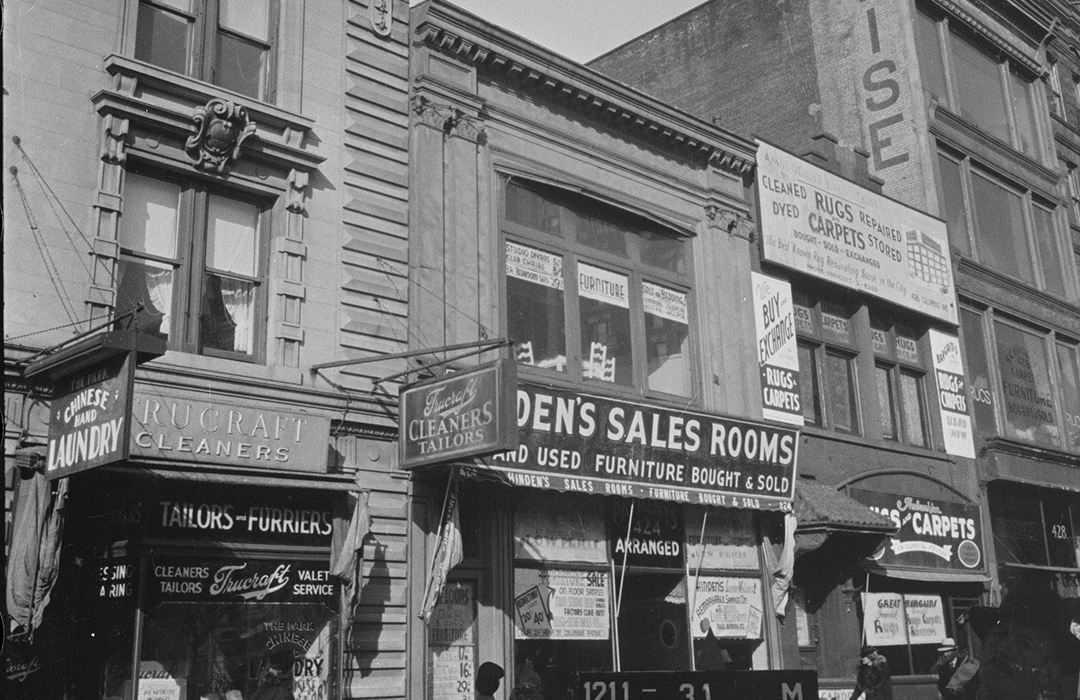 View to West side of Columbus Avenue between 80th and 81st Streets; Courtesy NYC Municipal Archive

Sheet Metal or Sheets to the Wind?

In April 1899 real estate operator John L. Miller purchased the small building at 424 Columbus Avenue from the estate of Amos R. Eno for $26,200.  It was home to John Castellano’s fruit and cigar store, and Anthony Carroll had just received a permit from the City to operate a bootblack stand out front.  Both men would soon have to find a new location.

In July 1899 Munckwitz filed plans for a “two-story brick and stone stores.”  (“Stores” was plural, signifying that the design was intended for two commercial tenants.)  Special permission was necessary for the bay show window that extended over the sidewalk past the property line.

John L. Miller’s little building was not the only construction project going on in August 1900.  The Metropolitan Street Railway Company had excavated a gigantic hole in Columbus Avenue, directly in front of the site.  As two Metropolitan employees, Cornelius Boshea and Owen Connorty, worked in the 8-by 10-foot hole, Alexander Lesser tried to drive his horse-drawn wagon around the crater while navigating traffic.

The horse’s hooves slipped, and the heavy animal tumbled into the hole, directly on top of the two men.  Fortunately, Lesser and his wagon remained on the street; but the workers were pinioned beneath the panicked horse.

The horse’s hooves slipped, and the heavy animal tumbled into the hole, directly on top of the two men.  Fortunately, Lesser and his wagon remained on the street; but the workers were pinioned beneath the panicked horse.

The builders working on 424 Columbus Avenue rushed to help, along with approximately 200 other men working in the vicinity.  They struggled to move the horse while someone was sent to find a derrick.  When it finally arrived, it took another 20 minutes to haul the horse out of the deep hole.  Through the entire ordeal Boshea and Connorty were pinned under the draft horse.  Both were removed to Roosevelt Hospital, Boshea with several contusions and Connorty with a broken leg.

Not long after the terrifying incident, 424 Columbus Avenue was completed at a cost of $12,000—about $377,000 in 2020.  Surprisingly, the second story of Munkwitz’s structure was clad in sheet metal.

Miller immediately found a pair of tenants for his new building.  Rich Schulder opened a branch of the National Cash Register Company on the first floor and Tony Pauka installed his Brunswick pool table showroom upstairs.

Schulder, however, would not remain long.  By 1902 the ground floor had become the E. A. Bauerschmidt Restaurant, run by Edward Bauerschmidt.  Later that year the Bauerschmidt name was drawn into a lurid news story; one that Edward tried to ignore but which his loose-tongued wife was happy to indulge in.

Several years earlier Bauerschmidt’s brother, Frank, had married Dorothy Allen, the granddaughter of one of Rochester’s most eminent merchants.  Upon his death Dorothy inherited $40,000, meted out in $1,000 payments every May 5.  The couple lived in New York City for a while and then were gone.

Years later, in December 1902, a Philadelphia burlesque actress, Dollie Earle, committed suicide just before the curtain went up in the Trocadero Theatre by swallowing acid.  At the time, Frank Bauerschmidt was “mentally and physically wrecked,” according to The Evening World, and “is spending his last days as a consumptive on a ranch in Colorado.” 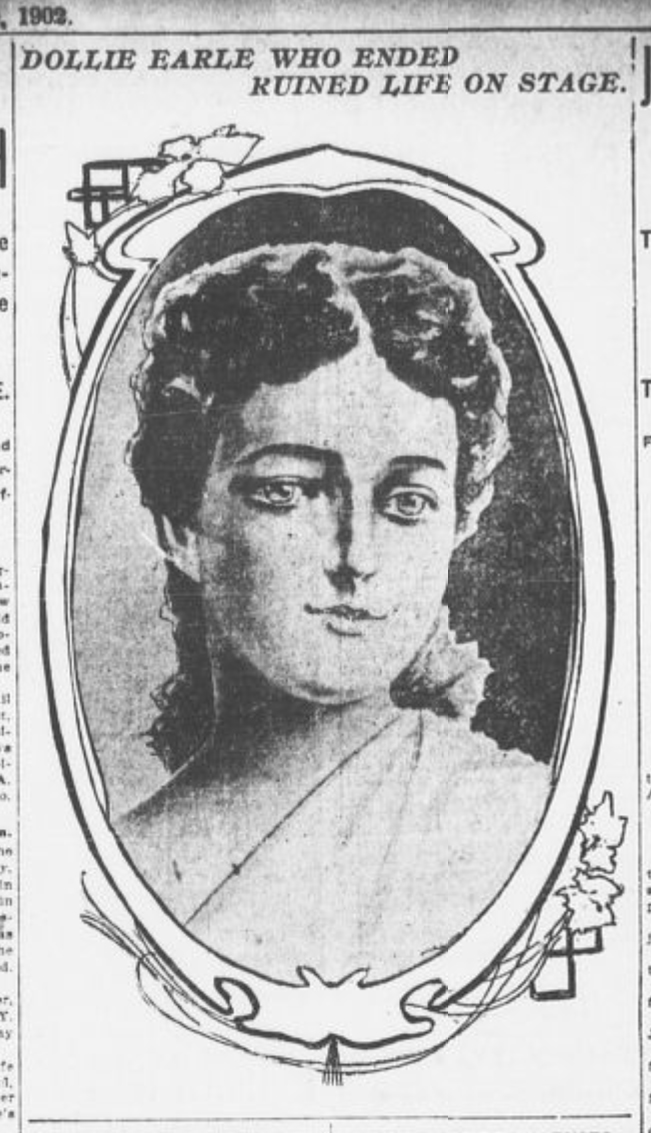 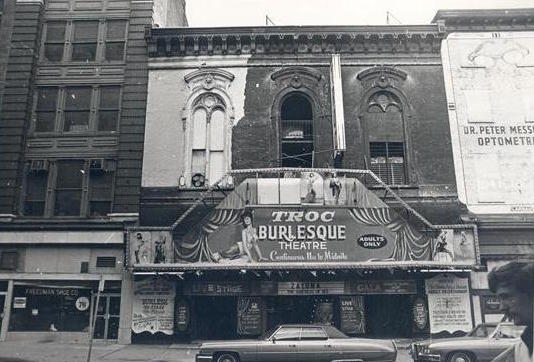 The Trocadero where Dollie Earle Performed

New York society may never have connected the dots were it not for the eagerness of Edward’s wife to talk to a reporter from The Evening World.  The story, said the newspaper, “brings to light the rapid descent of a young woman high in society, wealthy and naturally talented until she reached the bottom of the social ladder.”

Dollie Earle was, in fact, Dorothy Bauerschmidt.  Edward’s wife said that immediately after Frank married her, he discovered “that she was addicted to the excessive use of strong liquor.  On several occasions she shocked society by appearing at receptions and parties while intoxicated.”  The last straw occurred when she appeared at a ball “very drunk.”  After Frank took her home, she attempted suicide by turning on the gas in her bedroom; but he found her in time to rescue her.

“Soon she was barred from all homes and her husband brought her to New York, but to no good.  She went from bad to worse.  The $1,000 she received each year simply meant a two weeks’ spree for her.”

Driven nearly insane and utterly frustrated, Frank “had to send her away.”  Dorothy had been well-educated and professionally trained as a contralto, but her drinking ruined her singing voice.  Mrs. Bauerschmidt said, “Having a stunning figure she secured an engagement in a burlesque company like that at the Dewey Theatre, and since then she has been with several of them.”

By 1902 she was living as man and wife with an opium addict, C. E. Burns.  The police described him as “of the lower type of actors who travel with burlesque companies, doing odd jobs and living as the husbands of the women in the company.”

Mrs. Bauerschmidt summed up the tragic end for all the characters in the real-life drama.  Dolly Earle was now dead; C. E. Burns was in prison; and her brother-in-law, Frank Bauerschmidt, was confined by his doctors to Colorado.  The Evening World added, “the last reports from there indicate that he is near death from consumption and worry over his wife.”

Mrs. Bauerschmidt summed up the tragic end for all the characters in the real-life drama.  Dolly Earle was now dead; C. E. Burns was in prison; and her brother-in-law, Frank Bauerschmidt, was confined by his doctors to Colorado.  The Evening World added, “the last reports from there indicate that he is near death from consumption and worry over his wife.”

Both the Brunswick pool table store and the Bauerschmidt Restaurant would remain in No. 424 Columbus Avenue for several years.  By 1915, however, the entire building was taken over by the Wright Laundry.   The commercial laundry drew attention because of its ultra-modern facilities which used electric motors.

On October 9, 1915 Electrical World noted that at the Wright Laundry “central-station service is employed to operate all of the equipment.”  The journal used Wright Laundry to prove that “in the case of a laundry it may be pointed out that if purchased energy is used for operating laundry machinery, then only water heaters instead of expensive high-pressure boilers will be required.”

The firm continued its up-to-date offerings and in March 1918 Cleaning and Dyeing World announced, “The Wright Laundry…has installed a cleaning and dyeing department.”

Throughout the 20th century the little building was home to a variety of businesses.  In the 1930’s it was home to the interior decorating firm, Andrew Gillies Inc.; and in the last decade it housed the Central Carpet store.  More recently, in the spring of 2016, the Danish home goods store Flying Tiger moved in.

Julius F. Munckwitz’s little gray-painted building is a bit beleaguered today.  The sheet metal pilasters have a banged and bruised look and the bay show windows which John L. Miller fought the City for were long ago lost in a street level modernization.

Shop local to support the business currently at 424 Columbus Avenue: