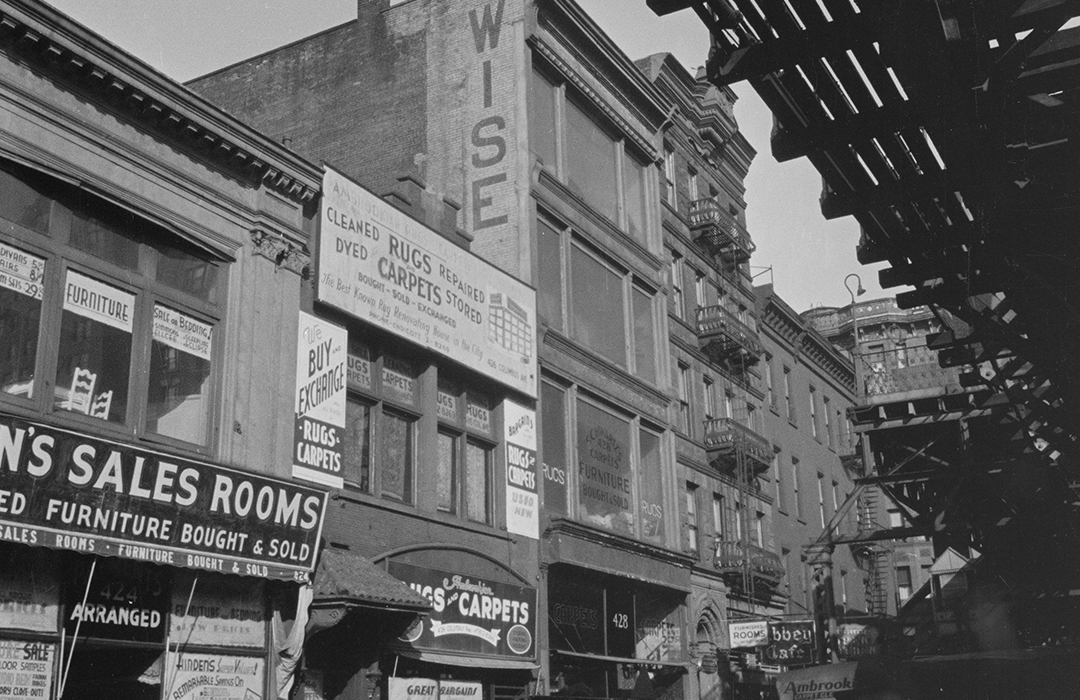 In 1867 Julius Jungmann’s father “bound him for a four years’ contract with [Dr.] Maisch” in Philadelphia, as noted decades later in the Bulletin of Pharmacy, which added “it was agreed that instruction was the only payment the boy should receive for his services.  But most highly was he paid!”

When his four years were up Jungmann attended the Philadelphia College of Pharmacy.  After graduation he returned to Maisch and became his chemical laboratory assistant.  Eventually he was skilled enough that he relocated to New York City and in 1876 opened a pharmacy on Third Avenue.  Highly successful, he purchased his own building nearby in the 1890’s.  Buoyed by continued prosperity, when the one-story wooden florist shop at 428 Columbus Avenue was auctioned in February 1899, Dr. Jungmann purchased it.  He paid $23,750 for the property—or about $755,000 today.

Jungmann hired architect Charles J. Perry to design a replacement building on the site for a branch pharmacy.  By using structural cast iron Perry was able to create a façade that was more glass than metal.  That was especially important to Jungmann’s business.  The Bulletin of Pharmacy pointed out that there were show windows on the second floor as well as the first; “a practice made particularly valuable because of the elevated trains which run by every few minutes.”

The four-story structure was completed in 1900.  Shortly afterward, in May 1901, Jungmann sold the building.  The New York Times explained, “Mr. Jungmann, who now occupies the entire building for his drug and chemical business, has taken a lease of the property for a term of years.”

“…The Jungmann stores are somewhat unlike the general ‘chain’ stores, as in them drugs, medicines, surgical appliances and sickroom appurtenances receive the attention usually devoted to less germane side-lines by the more ‘commercial” stores.”

The first floor of the drugstore held the pharmacy and the soda fountain.  Another full floor was devoted to the display and sail of hospital and surgical supplies.  The Bulletin of Pharmacy noted, “A specialty is made of handling things like bandages, trusses, braces, and elastic stockings.”  An innovative amenity for customers was the renting of wheelchairs.  The bulletin said, “Often on a summer day a dozen chairs will be out at a time.”  There was also a fully equipped optical department.

Jungmann had possibly sold his new building in order to free up cash for this third pharmacy, which opened in 1908.  In its February 1909 issue The Druggists Circular noted “Dr. Julius Jungmann will occupy an excellent location in the Metropolitan Life Building…The Jungmann stores are somewhat unlike the general ‘chain’ stores, as in them drugs, medicines, surgical appliances and sickroom appurtenances receive the attention usually devoted to less germane side-lines by the more ‘commercial” stores.”

But Jungmann had expanded too quickly.  In March 1910, The Pharmaceutical Era announced the bankruptcy of the J. Jungmann corporation.  Industry analysists agreed that it was the last location that dealt the death blow to the chain. 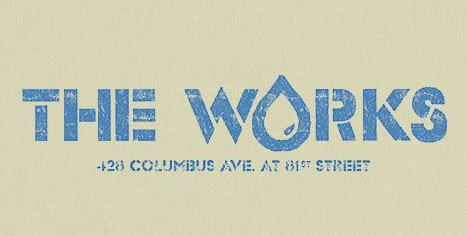 Advertisement for The Works

The building was leased to Benjamin S. Wise in 1913 for his extensive auction house business.  He renamed it the Wise Auction Building and installed various “galleries” throughout.  They were well-known as the venues where the valuable paintings, furnishings and antiques of grand estates were liquidated.  On March 28, 1922, for instance, an auction of the “household effects, works of art, etc. from the Hollender, Cooper, Hackett Estates” was held.

Perhaps the most memorable of Benjamin S. Wise’s auctions was too large for the Columbus Avenue building.  On May 2, 1929, he sold everything within the doomed Waldorf-Astoria Hotel on Fifth Avenue and 34th Street.  The day before the auction the Elmira, New York newspaper the Star-Gazette lamented, “Only the auctioneer’s call will be heard in its magnificent rooms and the prized and beautiful fixtures of the world’s most reknowned [sic] hostelry will be sold to the highest bidder.”

On July 1, 1933 The New York Sun reported, “The Wise Auction Company is to quit the galleries the firm has occupied at 428 Columbus avenue for the last twenty-two years and move to new quarters at 160 East Fifty-sixth street.”  Five months later in December, Prohibition was repealed.  The ground floor now of 428 Columbus Avenue became a liquor store, operated by the Capitol Wine & Spirit Corp.  The libations it sold held their own with the Chippendale furniture and valuable artworks previously exhibited in the space.  In December 1934 the store advertised vintage cognacs from 1811 and 1865.

Perhaps the most memorable of Benjamin S. Wise’s auctions was too large for the Columbus Avenue building.  On May 2, 1929, he sold everything within the doomed Waldorf-Astoria Hotel on Fifth Avenue and 34th Street.

At some point within the next few years the building was lost at foreclosure and The Bank of America converted the upper floors to apartments.  When it was sold in October 1946, The New York Sun described it as a “four story tenement and store.”  The buyer paid the equivalent of $687,000 in today’s money.

A renovation completed in 1979 resulted in five apartments above the commercial space.  It was shortly afterward that The Works, a popular gay bar, opened.  On June 22, 2016 The New York Times printed an article in which local celebrities told of their early personal experiences in gay bars.  Television host and producer Andy Cohen recalled, “When I moved to New York in 1990, the Works on Columbus Avenue and Uncle Charlie’s on Greenwich Avenue were where I built a community of friends.”

In a renovation completed in 1999 a penthouse level was added, set back from the original roofline.  The upper floors now contained duplex and triplex apartments.  The Works, a fixture for Upper West Side’s gay community, closed its doors in 2010.  Today a children’s wear store occupies the space.

Shop local to support the business currently at 428 Columbus Avenue: