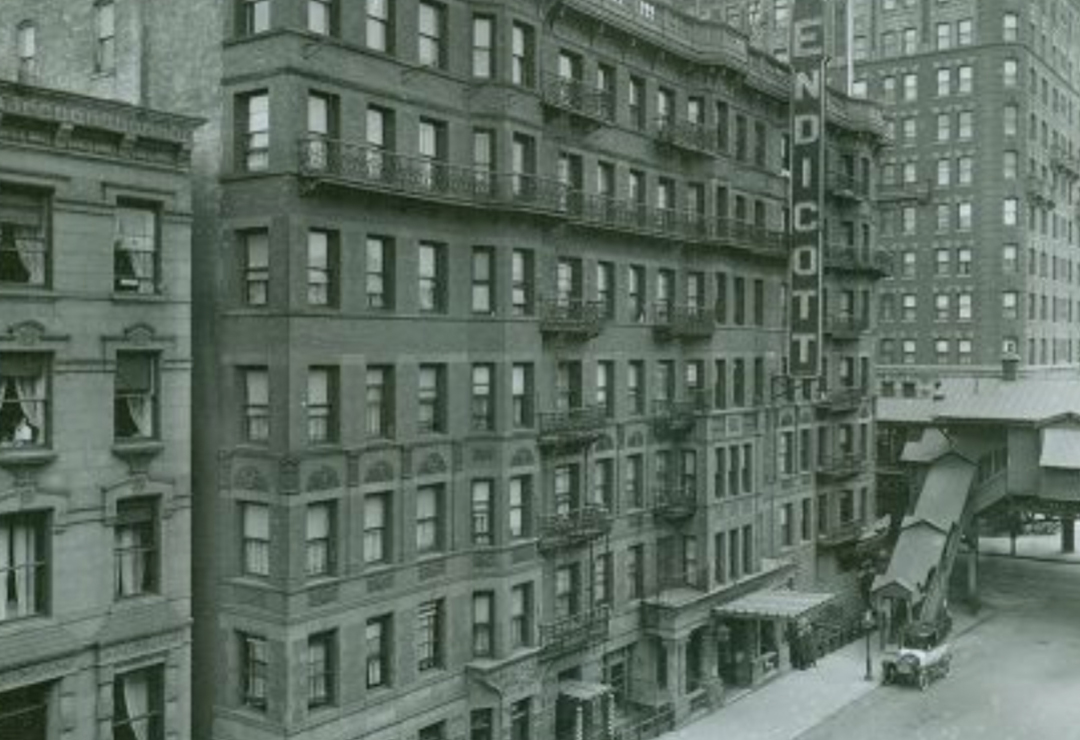 Check Out the Hotel Endicott

On December 20, 1890 the Record & Guide, a real estate journal, reported on the “great demand for family hotels” saying, “For small families this has become a very popular way of living and enables one to escape many annoyances connected with the cares of housekeeping.”  To underscore its point, it noted, “The proprietor of the Hotel Endicott recently remarked that his building was all rented before it was finished, and that he could nearly fill a building three times the size of his present completed portion.”

The “present completed portion” took up the southern half of the western Columbus Avenue block front between 81st and 82nd Streets.  The following year the second portion, a mirror image, extended the Hotel Endicott to 82nd Street.  Designed by architect Edward Angell for a group of investors headed by Charles Fuller, the seven-story brick structure was deemed “a monument” upon its completion by the Record & Guide.

The main entrance was on 81st Street, with another a block away on 82nd.  Uniformed staff greeted residents and guests in the marble-floored lobby.  “Passing the vestibule the entrance doors to the hall are quickly swung open by a little page in the proverbial brass buttons,” said the Record & Guide, “and an artistic sight meets the eye…The first object which strikes the attention of the visitor is the old English eight-day clock in the northwest corner.”  There was also a six-foot Oriental vase on a pedestal, a fireplace mantel cast in bronze, and carved oak furniture.

On the first floor was a large white-and-gold hall called the reception room, available for dances and receptions and could accommodate 600 guests.  Residents of residential hotels took most of their meals in an elegant communal dining room. The dining hall of the Hotel Endicott was on the second floor and comprised a series of rooms.

Residents of the Hotel Endicott would enjoy the latest in amenities and luxuries, including steam heat, electric lights, mail chutes, a telephone in the lobby, and a resident doctor.  Gentlemen tenants would take advantage of the smoking room and billiard room.

Tenants could choose suites that ranged from two rooms and a bath to nine rooms and two baths.  Rents for the most expensive apartments equaled $3,625 per month today.  “A dining-room, sitting-room, bath-room, bedrooms, kitchen and laundry, are the rooms which make up a medium-sized suite,” said the Record & Guide.

What might have been a mundane light court was transformed into a 6,500 square foot “miniature park.”  Charles Fuller described it as a “greensward” with “a pathway with seats, and a small fountain in the center.”

Residents of the Hotel Endicott would enjoy the latest in amenities and luxuries, including steam heat, electric lights, mail chutes, a telephone in the lobby, and a resident doctor.  Gentlemen tenants would take advantage of the smoking room and billiard room.

Along Columbus Avenue were seven storefronts.  When the building opened, they held a clothing store, a pharmacy, a barbershop, a restaurant, a café and a real estate office.  The drug store was the epitome of a late Victorian apothecary with mahogany cabinetry, marble floors and “handsome decorations.”  One journal promised it “is to be one of the finest in the city.”

There was not a single vacancy when the massive building opened.  The names of its residents appeared regularly in the society columns.  Such was the case on June 21, 1894 when Louse Floyd Smith was married to Asa A. Alling “in the drawing-rooms of the Hotel Endicott,” as reported in The Evening World.  The bride and her parents, Mr. and Mrs. George Hervey Smith were early residents.  “It was a white and green affair,” said the newspaper, “and the floral decorations in these hues were particularly airy, delicate and lovely.”

Not all the press coverage, of course, was so welcomed.  A particularly gruesome incident occurred in the apartment of Dr. Ephraim P. Hayes and his wife in February 1900.  The couple had come to New York in 1896 from Chicago.  The well-known dentist oversaw the dental offices of the Siegel-Cooper Company as well as having several offices in the city.

In January 1900 Dr. Hayes signed a lease on an eight-room suite in the Hotel Endicott.  Living with him and his wife, Mary, were a nephew, dental student Ralph Hayes, and one servant, Elizabeth Williams.  At the same time he established his uptown “dental parlor” in the building.  He put Dr. Franklin L. Caldwell in charge of it.

Investigators later discerned that Caldwell, who had a romantic attraction to Mary, had managed to get her addicted to morphine.  “In that way he had undermined her mind and body,” said attorney William P. Burr.  It came to a tragic end on February 24 when Caldwell managed to sneak into the apartment.  The maid and Ralph Hayes heard two gunshots and, after a pause, another.  They rushed to Mary’s bedroom to find her shot twice in the head.  Caldwell had fired the third shot into his own brain. 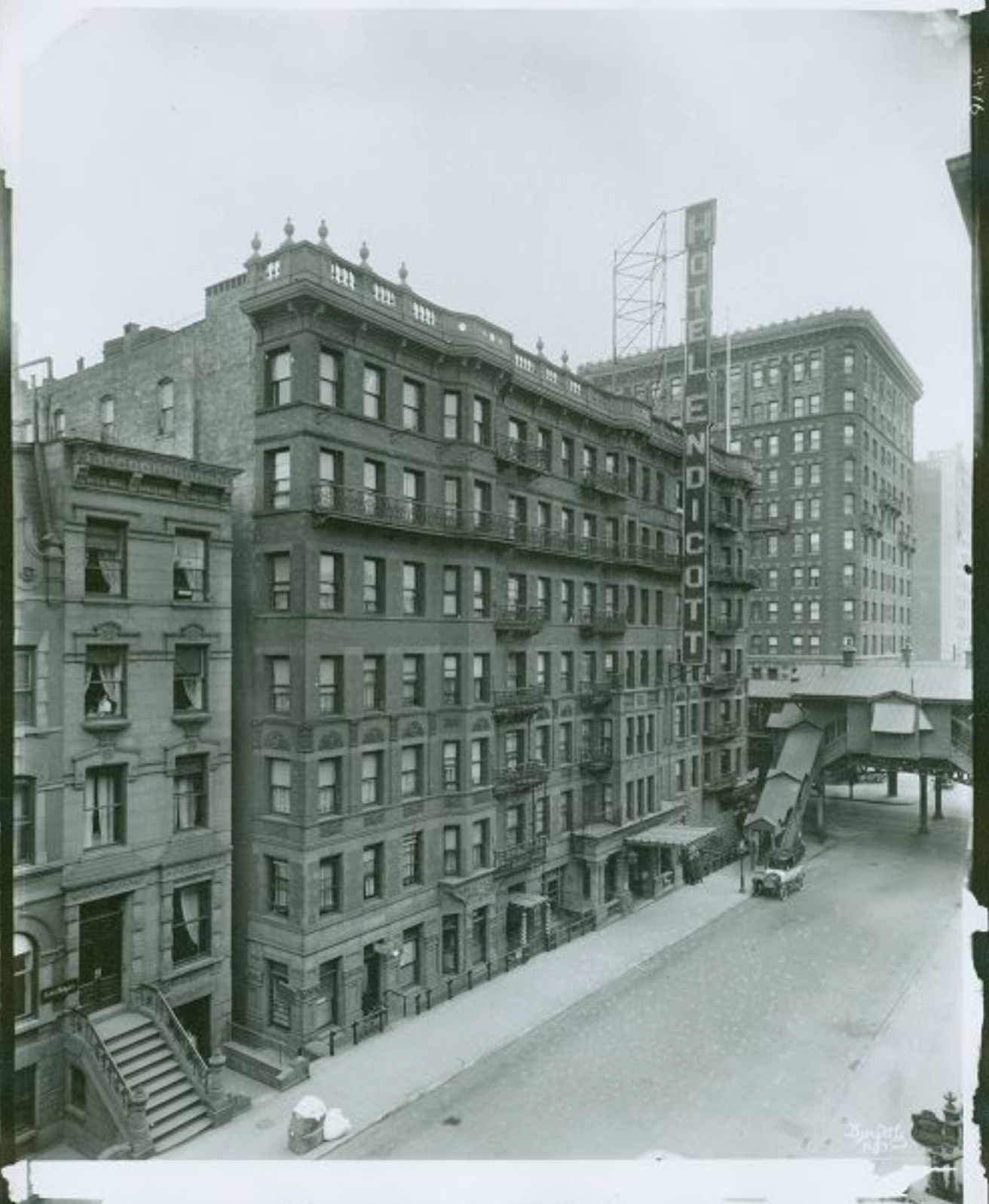 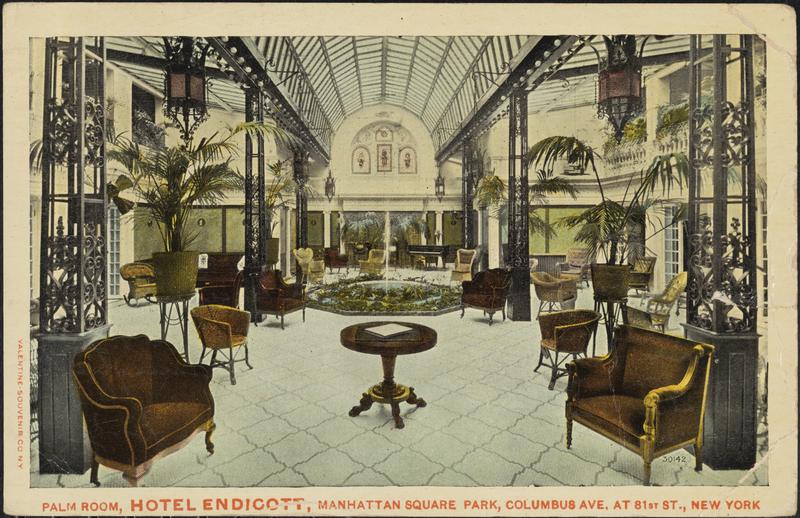 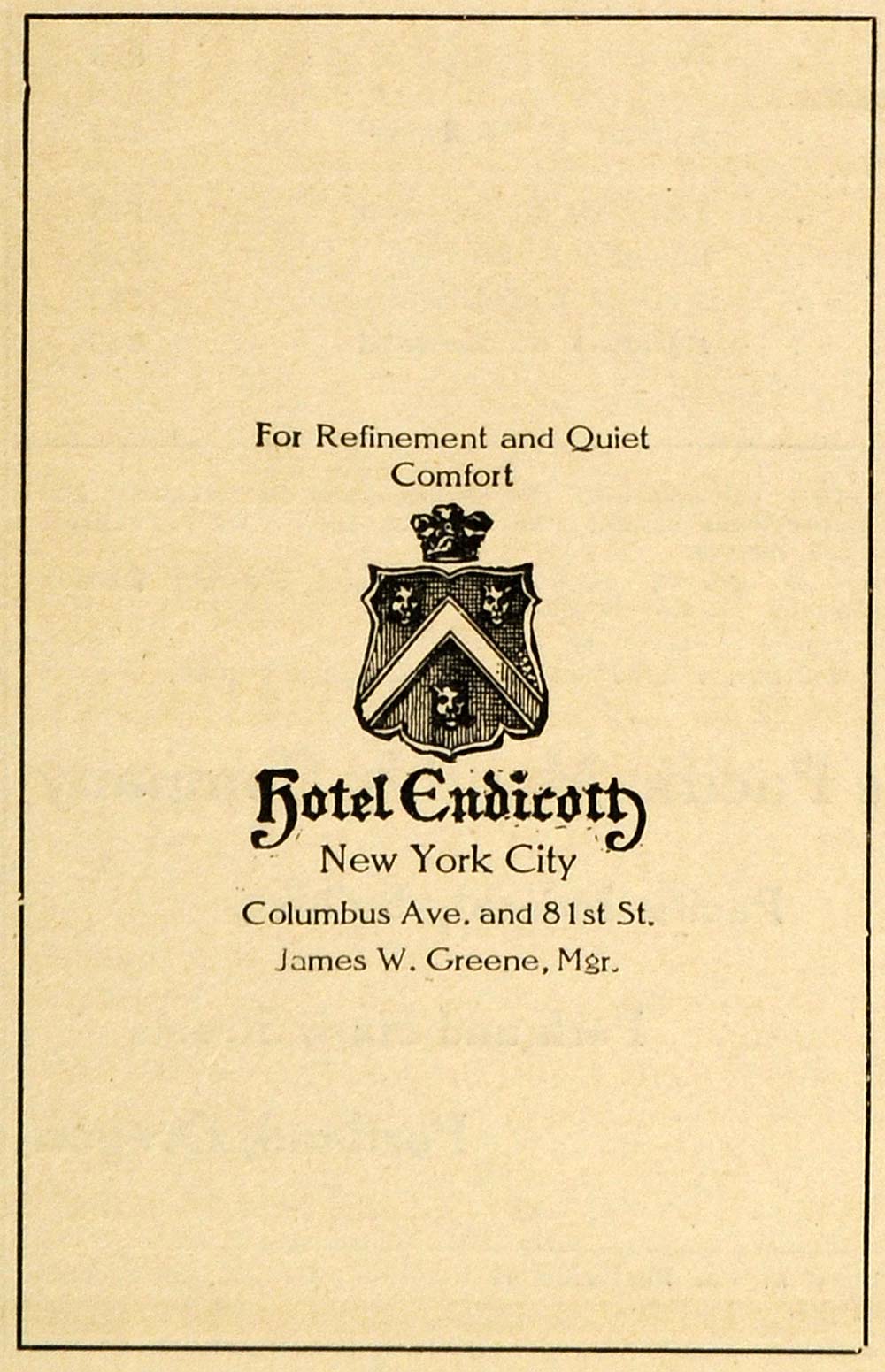 In the meantime, the ground floor rooms were the scene of dinners and meetings.  The West Side Association held its monthly meetings here, for instance.  And at a dinner of the International Geographic Congress on September 14, 1904 Commander Robert E. Peary announced the details of his next expedition to the North Pole.

Residents, of course, dressed for dinner.  Men and women entered the dining room in evening clothes.  On the frigid night of January 23, 1905, however, they found themselves on Columbus Avenue instead.  The dining room sat directly over the kitchen, where a fire ignited that evening.  As the kitchen staff desperately tried to extinguish it, it caught the ceiling on fire and “ate its way through the floor,” according to the New-York Tribune.  “Smoke arose and rapidly spread.”

Even though flames were licking through the hole in the floor and smoke was filling the room, waiters assured the fifty diners “that there could be no danger.”  Nonetheless, “women in evening dress who had been in the dining room ran into the street hysterically.”  Fire fighters extinguished the blaze “after the flooring of the dining room had been torn up and the carpet ruined.”

The upscale building drew artistic types as well.  Lewis Williams offered “voice and ear training” from his apartment in 1909.  Critic Rupert Hughes commented “Mr. Williams comes to us by way of London.  He has already gained himself a high standing.”  And the Italian-born operatic contralto Leontine De Ahna had an apartment here in 1912, where she offered vocal coaching.

Another foreign-born resident was General Domingo Diaz of Columbia.  He had been highly involved in the Panama Canal project and, according to the New-York Tribune, “was influential in bringing about the acquisition of the Canal Zone by the United States.”

Even though flames were licking through the hole in the floor and smoke was filling the room, waiters assured the fifty diners “that there could be no danger.”  Nonetheless, “women in evening dress who had been in the dining room ran into the street hysterically.”  Fire fighters extinguished the blaze “after the flooring of the dining room had been torn up and the carpet ruined.”

Dr. Carlos Leon had been one of the foremost lawyers in Venezuela prior to 1914.  He had held the offices of Justice of the Federal Court, Minister of Public Instruction, Governor of a federal district and representative to the Hague Tribunal.  But his political opinions drew the ire of President Juan Vincente Gomez and he was imprisoned in June 1914 with a 50-pound iron ball fastened to his ankle.  In describing the inhumane conditions, he remarked, “During the eight years I was prisoner seventy such prisoners starved to death.”

His salvation came only after the intervention of President Warren G. Harding who had received a letter signed by 200 women in Caracas exposing the suffering of the Venezuelan political prisoners.  Upon his release Leon held a press conference in his apartment in the Hotel Endicott on October 21, 1922.

At the time, one of the Endicott’s long-term residents was Brigadier-General Owen Jay Sweet.  He had retired from the United States Army in 1909, having served in the Civil War with General Sherman, overseas in the Philippines and “in the Indian campaigns,” according to the Brooklyn Daily Star.  He remained in his apartment until his death in 1928 at the age of 82.

Once deemed a “monument,” by the end of the Great Depression the Hotel Endicott was simply outdated.  Well-to-do families preferred sleek apartment buildings with modern conveniences.  Bronze mantelpieces were no longer an attraction.  As the decades passed, the Hotel Endicott declined to what could best be described as a flophouse.

On November 5, 1967 The New York Times remarked, “A person can get a room there for $3 a night or, as most of its residents do, from $13.95 a week.  It is the home of some 450 persons, about half of whom are unemployed.”  Helen Baron, the desk clerk for 11 years, told the reporter that residents dumped garbage in the halls and “I used to have to tell the men to take a shower, have a shave and to change their clothes.”

In reporting on a day care center in the building, The Times called the Hotel Endicott “a hangout for drug addicts,” adding, “Roaches abound—in the office file cabinets, behind the children’s paintings on the walls, among the children’s bed rolls…Outside, in front of the hotel…junkies slouch in their peculiar S-shaped posture, nodding or just waiting.”

Change eventually came to the Columbus Avenue neighborhood and to the Hotel Endicott.  In 2006 the building was renovated, and apartments revamped.  A subsequent remodeling completed in 2013 resulted in a total of 297 apartments including several duplexes.

Shop local to support the businesses currently at 440-458 Columbus Avenue: