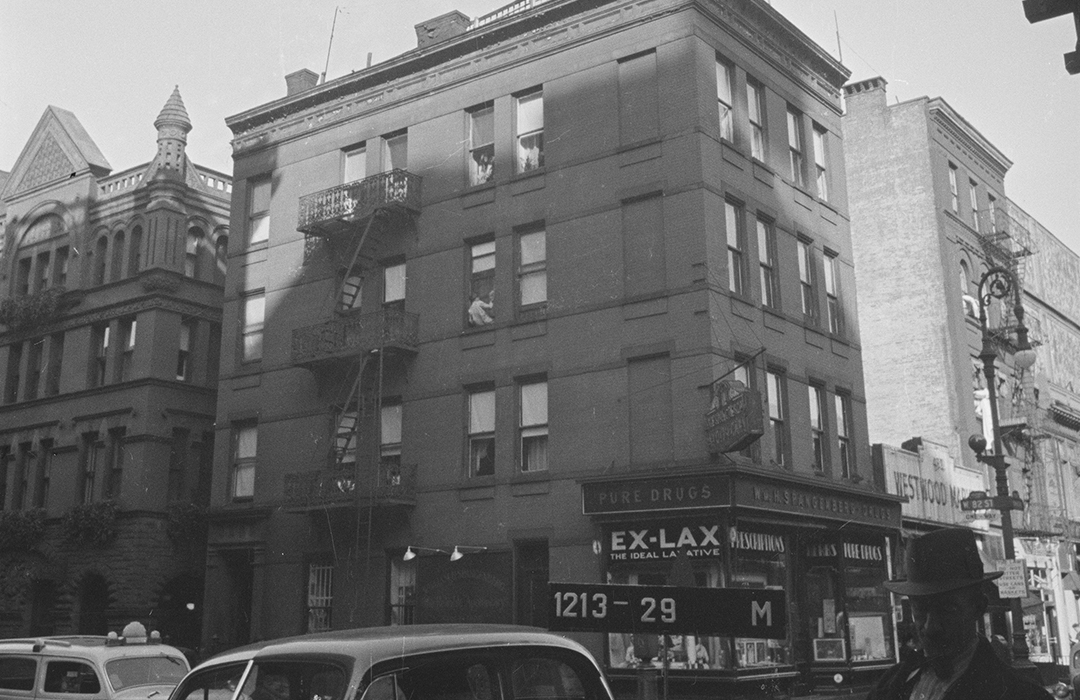 In 1885 real estate developer J. A. Hopper completed construction of a four-story flat, or apartment, building at the northwest corner of Columbus Avenue and 82nd Street.  Designed by Ralph S. Townsend, its no-nonsense neo-Grec design featured stone courses that joined the window lintels of each floor in unbroken lines.  Residents entered around the corner at 101 West 82nd Street where the brownstone framed entrance sat above a three-step stoop.  The ground floor on the avenue side held a commercial space, which became home to Starr H. Ambler’s drugstore.

Most of the building’s middle-class residents worked in offices or ran small businesses.  Typical was George A. White who had an apartment here by 1892.  He worked in the office of the Gilmour Manufacturing Company, which made hair felt roofing (a material laid under shingles for waterproofing) and canvas, until being fired that year.  White then started his own business selling the same products.

The problem was that he had no means of buying nor manufacturing his stock.  And so, the 27-year-old worked out a scheme with Richard C. Rutledge, the bookkeeper of his former employer.  He would send orders to Rutledge, who filled and shipped them to White, but never billed him nor documented the transactions.   On January 8, 1893, the New-York Daily Tribune reported, “Mr. Gilmour suspected nothing until one day recently, when Rutledge was away sick.  A telegram addressed to Rutledge, ordering goods, fell into Gilmour’s hands.  As he did not know the name of the person signed to the telegram, his suspicions were aroused.”

Gilmour went to the telegraph office to inspect the original dispatch and recognized White’s handwriting.  Rutledge confessed and White was arrested shortly after.  The article noted, “The thefts will probably amount to many thousands of dollars.”

The argument of the previous day was renewed and, after tossing insults and accusations back and forth, Mary “grabbed [a] bottle of cyanide potassium from dresser and drank it.  She fell to the floor and within ten seconds was dead.”

Living here at the same time was Swiss-born Charles Erisman and his wife.  The 32-year-old ran a butcher and grocery store nearby on Columbus Avenue and 80th Street.  On September 19, 1894, Erisman left home, telling his wife he was going downtown to Francis H. Leggett’s wholesale provisions store to buy stock.  But he never came home.  Mrs. Erisman’s fears were heightened the following morning when she received a letter from him.  The Evening World said it was “dated at Jersey City at 6:30 P.M. last night, saying he was going away for a few days and not to worry; that business was not good and that he was heartbroken.”  Mrs. Erisman notified the police, saying she “thought her husband was wandering in a demented state.”  (Charles Erisman turned up later, unharmed.)

Another business owner was Harry Zimmerman, who ran a jewelry store half a block away at 455 Columbus Avenue.  He and his wife Mary had been married in 1892 and they began renting a room to a young man around the turn of the century.  It was a situation which soon caused problems.

Mary was 22 years younger than her husband and Harry had “objections to the attentions of a ‘star boarder,” according to The Brooklyn Daily Eagle.  The matter festered over a long period before boiling over early on the morning of November 11, 1904.  The couple had had an unusually bitter quarrel the day before and Harry stormed out and “sought solace in drink,” according to the newspaper.  He finally came home at 1:45 in the morning.  When he walked in Mary was there, in her nightgown, waiting.  The Brooklyn Daily Eagle reported that she “berated him for coming in so late, and said other things that were not complimentary.”

The argument of the previous day was renewed and, after tossing insults and accusations back and forth, Mary “grabbed [a] bottle of cyanide potassium from dresser and drank it.  She fell to the floor and within ten seconds was dead.”  (The poison was used in Zimmerman’s jewelry-making business).  The article said, “Mrs. Zimmermann took enough of it to kill a regiment.”  With Victorian drama, it added that the 28-year-old woman “fell upon a spot on the floor directly underneath her marriage certificate, which hung, framed, on the wall.” 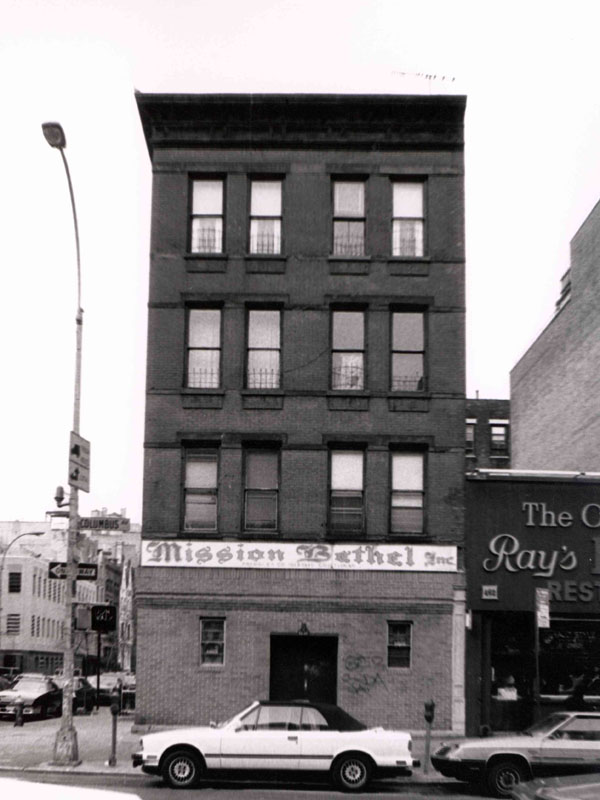 In the meantime, Starr H. Ambler’s drugstore had gone out of business in 1897 for failing to pay rent.  The space became the W. H. Spangenberg pharmacy.  Like turn-of-the-century drugstores, it offered a wide variety of items like candies and “notions.”  In 1898 William H. Spangenberg acquired a liquor license (most likely for the sale of bottled wine).

On January 7, 1907, Frederick Bergman, bloodied and in shock, stumbled into the pharmacy, crying out for help.  He had had dinner in the apartment of John and Lena Weideman a block away at Columbus Avenue and 80th Street.  A young woman, Pauline Ratel, lived with the couple.  Shortly after dinner, John Weideman complained of not feeling well and left to get medicine at a drugstore—quite likely at William H. Spangenberg’s store.

Soon afterward George Fallon, whose florist shop was on Columbus Avenue and 81st Street, knocked on the door.  Bergman and Pauline Ratel were talking when, in another room, “Fallon seized Mrs. Weideman around the waist and attempted to kiss her.”  She struggled and the other two rush to her assistance.  Fallon grabbed a razor from the bureau and slashed Lena Weideman’s throat.  The Washington D.C. newspaper The Evening Star reported, “Before the others had time to appreciate what he had done, Fallon turned on them and slashed them viciously.”  Bergman was cut across the forehead and Pauline was slashed twice across the face, one gash severing her tongue.

After slashing Lena’s throat again, Fallon took out a revolver, shot her twice in the heart then shot himself in the right eye.  Bergman ran out and into the Spangenberg drugstore where his wounds were dressed, and he telephoned for a doctor.  “In the telephone booth he fainted,” said the article.  Bergman was the only survivor of the maniacal attack.

After slashing Lena’s throat again, Fallon took out a revolver, shot her twice in the heart then shot himself in the right eye.  Bergman ran out and into the Spangenberg drugstore where his wounds were dressed, and he telephoned for a doctor.  “In the telephone booth he fainted,” said the article.  Bergman was the only survivor of the maniacal attack.

William H. Spangenberg was still operating the pharmacy in 1920 when he was arrested on February 11 for drug violations.  Federal Judge Hough held him on $5,000 bail—more than ten times that much in today’s money.   He was accused of being “the conspirator with Dr. Ernest S. Bishop, who was charged the day before with supplying drugs to addicts.”

Interestingly, Spangenberg’s business survived the ugly press and the court case.  He ran the pharmacy until 1930, when he sold it to David Ratner who also operated a drugstore from the space.

The residents continued to be middle class, like French-born Emile Gohimont who lived here in 1923.  The young man was lucky enough to notice his photograph in the Daily News that October.  The newspaper ran a publicity contest whereby “concealed photographers” went into the city and snapped pictures of random pedestrians.  Five photographs were published each day and New Yorkers who identified themselves within five days won $25.

Fred Saltersfield’s name appeared in newsprint two years later for less happy reasons.  He spent two days in jail rather than pay the $25 fine for speeding in Queens.

Around 1993 the building was purchased by Juan Perez Hilerio, pastor of the Mision Bethel Inc. Church.  The ground floor space that had housed a pharmacy for a century was bricked up and converted to church, which remains today.  Otherwise, little has changed to Ralph S. Townsend’s unassuming brick structure.