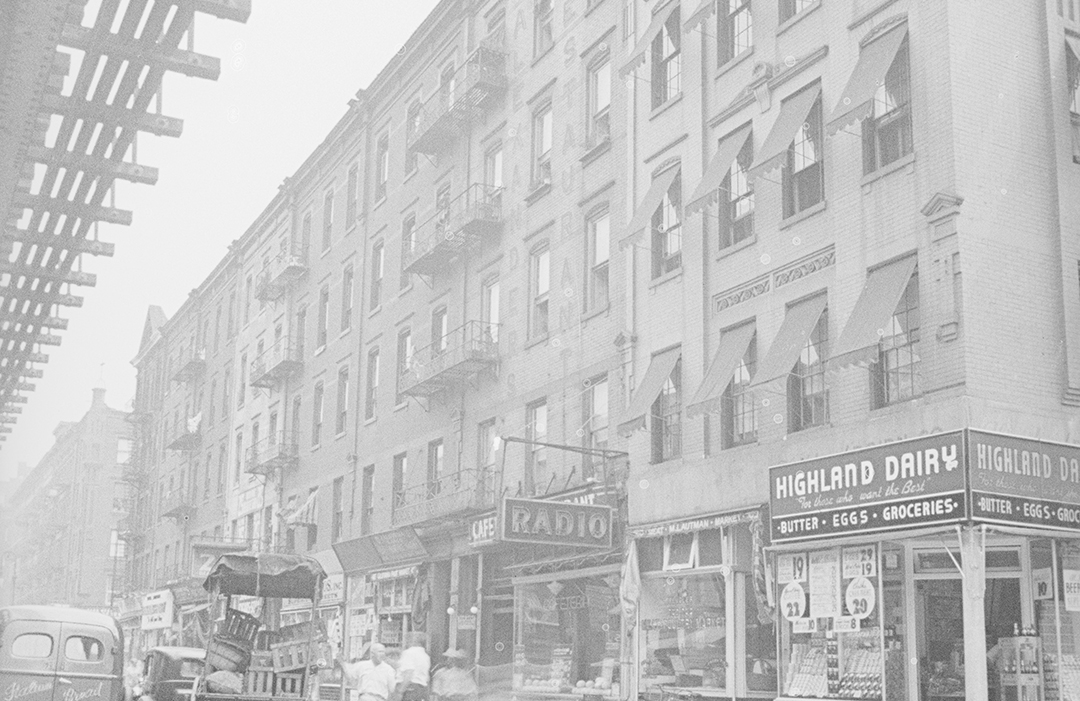 On October 24, 1885 the Record & Guide reported that Lorenz Weiber “intends to build eight five-story brick and stone flats and stores on the east side of Ninth avenue, covering the block front from Eight-second to Eighty-third streets.”  And exactly two weeks later the journal noted that architect Ernest E. W. Schneider was working on the plans.  The buildings, said the article, “will all have stores on the first story and will be of an improved character.”  That “improved character” came with a construction cost of more than $4 million in today’s money.  The project was completed in 1886 and the investment paid off for Weiber.  In April, he sold the entire row for the equivalent of $7.25 million today.

By the early 1890’s this stretch of Ninth Avenue had been renamed Columbus Avenue.  In 1893, the two corner stores could not have been more different.  Grocer James Fitzpatrick ran the Delmonico Market in 461 Columbus Avenue, while another Irish immigrant, Thomas Carney, operated a saloon at the northern end of the block.  In between were the real estate office of Potter & Bros. in 463, the Fischer Bros. cigar store in 469 (William Fischer lived upstairs in 469 Columbus, while his brother Frederick lived on West 63rd Street), Henry D. Fajen’s delicatessen was in 471, and the Fairbanks & Co. bakery operated from 473 Columbus Avenue.

Interestingly, while many if not most of the Upper West Side apartment buildings were being constructed with upper middle-class residents in mind, the tenants here were decidedly working class.  A large proportion of them were Irish and German immigrants.  The tenant list in 1894 included names like Calle, Dillon, McElhinney, Mackenzie, Mahoney, Carmichael, Cullen, Hornhorse, Ehil, Kattau and Oshman.  They worked meager paying jobs like janitor, porter, waiter, laborer, driver, plumber, dressmaker, and coachman.

Modest incomes sometimes led tenants to crime.  Living with a Mrs. Muldoon in 463 Columbus Avenue in 1894 was her orphaned nephew, 18-year-old Thomas O’Connor.  He had been employed as a plumber’s helper, but had recently taken a job sweeping out the offices of Potter & Bros. downstairs.  On March 24 The World reported that O’Connor, “an innocent looking youth,” had been arrested for stealing and forging two checks from his employer.  Sadly, he had committed the crime hoping to pay the rent of another aunt, a Mrs. Gleason.

A bizarre incident occurred in 1901 after Mary Rigney answered an advertisement on August 23.  Mary lived on the third floor of 463 Columbus Street with her husband Thomas and their married daughter.  The ad read “Board wanted for a three-months-old baby” and was signed T. Martin.  A man who said he was Mr. Martin called at the apartment and said he would pay Mary $10 a month to care for the child.

She worked out a scheme with two hotel carpenters, Frank P. Fanning and Patrick Walsh, who had passkeys to every room.  Between May and October of 1905, the men stole jewelry and valuables and then passed them to Kate.  After police arrested the carpenters on October 7, they went to Kate’s apartment in 471 Columbus Avenue where they found a stash of stolen items.

On September 5 and woman who identified herself as Mrs. Curren, the baby’s aunt, arrived with the infant.  She dropped him off and rushed away, saying “The baby’s father is a waiter in a restaurant on White street and I am going downtown now to get $10 for you.  I will come right back with it.”  She never returned.  The Daily Standard Union reported, “When the Curran woman left the house the baby immediately became very pale.  Mrs. Rigney was alarmed and sent in haste for a doctor.”  But before he could get to the apartment, the child was dead.  No trace of Martin or Curren could be found.

Henry D. Fajen lived above his delicatessen in 471 Columbus Avenue.  He and his wife employed a 23-year-old German woman, Annie Koch to help with the housework.  Annie was in serious trouble when she became pregnant in the summer of 1905.  She sought the help of Margaret Weick, a midwife on West 37th Street, who attempted an abortion.  It ended tragically.  Annie died in the prison ward at Bellevue Hospital because of the botched operation on August 15.

At the time, Kate Gallagher had worked as a servant in the Ansonia Hotel for three years.  She worked out a scheme with two hotel carpenters, Frank P. Fanning and Patrick Walsh, who had passkeys to every room.  Between May and October of 1905, the men stole jewelry and valuables and then passed them to Kate.  After police arrested the carpenters on October 7, they went to Kate’s apartment in 471 Columbus Avenue where they found a stash of stolen items.  According to the New-York Tribune, “The police now say that the thefts from the hotel will amount to more than $20,000.”  It was a staggering amount, nearly $600,000 by today’s standards.

Thomas Carney’s saloon was still operating in 475 Columbus Avenue in March 1907 when his bartender Timothy McInerny, was arrested for selling liquor to undercover detectives on a Sunday.  Others of the original commercial tenants still here through 1915 were the Fairbanks & Co. bakery, and Henry D. Fajen’s delicatessen. 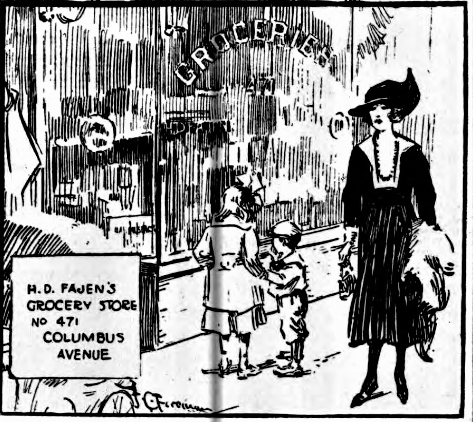 In the meantime, tenants upstairs continued to get into hot water.  Sixteen-year-old William Richardson was on parole for burglary in June 1913 when he was arrested on a charge of grand larceny.  The New York Herald reported “He admitted, the police say, that he took two extra tires from an automobile belonging to Arthur L. Wossell, while it was standing in front of the San Remo Hotel.”

The following year Nicholas Slevie, who worked as a waiter at the Hotel Endicott, pleaded guilty to grand larceny.  As Kate Gallagher had done, he schemed with another waiter, Joseph Bernavo, to steal “hundreds of dollars’ worth of silverware, cut glass and linen from the hotel,” according to The Evening World on February 2, 1916.  When the “total value of the loot” grew to a disturbing amount, the hotel had undercover detectives pose as guests and order room service.  Slevie brought the trays to the men on February 1 and when he returned the trays expensive items were missing.  And as had been the case with Kate Gallagher, they searched Slevie’s rooms in 469 Columbus Avenue where they found stolen items worth $21,000 today.

During the World War I years, the Savoy Restaurant was in 463 Columbus and the Leader Restaurant—a type of diner—was next door in 465.  The Savoy was replaced by a Chinese restaurant in the early 1920’s.  It drew the attention of Prohibition agents in the spring of 1923 who, according to The New York Times, received complaints “of parents who said that their young daughters had become drunk on liquor” bought there.  The restaurant was raided on March 17.  There were more than twenty young men and women there.  Agents discovered “eight barrels of claret, a five-gallon jug of wine and five one-gallon jugs of wine and four quarts of whisky.”  The proprietor, Wang Hong, and a waiter, Wong Sun, were arrested and charged with “illegal possession and sale of liquor and also with maintaining a public nuisance.”

The 1920’s continued to see foreign-born residents, some of whom, unfortunately, continued to be on the wrong side of the law.  On December 8, 1924 Louis Cliberti was arrested for stabbing John Rastetter during a fight at a party in Queens; and 22-year-old Matilda De Maria was sentenced to prison for two and a half years in March 1928 for robbery in the second degree.

Agents discovered “eight barrels of claret, a five-gallon jug of wine and five one-gallon jugs of wine and four quarts of whisky.”  The proprietor, Wang Hong, and a waiter, Wong Sun, were arrested and charged with “illegal possession and sale of liquor and also with maintaining a public nuisance.”

With Prohibition ended Patrick Joseph Deveb opened the Westport Tavern Cabaret in 469 Columbus Avenue in 1932.  He routinely advertised in the Irish newspaper The Advocate.  An ad in 1936 touted “Irish and American Dancing nightly.  Thursday is Irish Night.”

John Padden was 32 years old in 1938 and on parole.  He had been released from Sing Sing prison the previous June having served seven years for first-degree assault.  But he had not given up his gangland connections and it ended badly for him on May 16 that year.  Movie mobsters are noted for ordering an enemy to be “taken for a ride.”  The tactic was very real, however, and police at the time called those murders “ride slayings.”  Padden was taken for a ride that night.  The New York Post reported that he “was shot through the heart and tossed, still alive, out of an automobile in front of his home at 467 Columbus Avenue.  His killers fired three more shots at him, one of which crashed through the window of a cafeteria, sending a score of customers diving under tables.”

The last quarter of the 20th century saw a drastic change in in the storefronts.  In 1977 the Park West Pharmacy moved into 463 Columbus Avenue (it remains there today).  For two decades starting around 1988 Roxy Hardware & Paint Supply occupied the space at 469 Columbus.  (That year 465 was demolished and replaced with a modern structure.)

In 1995 Bellini, a store “for babies and kids” was in 473 Columbus; and in 2001 Mama Mexico restaurant was in 461 and Fujiyama Mama restaurant was next door at 467.  In the early 21st century and by 2019 Tri Dim West restaurant had replaced Fujiyama Mama.  Other restaurants along the row today include Tarallucci E Vino in the space that was Thomas Carney’s saloon for decades; Lokal Mediterranean restaurant next door; the Zingone Bros. grocery in 471 and Lenwich restaurant in 469.  At the southern corner is the Nexa Pilates studio.

Despite their being time-worn and the replacement of one of the buildings, the architectural integrity of Ernest E. W. Schneider’s neo-Grec style row of flat buildings survives after 135 years.

Shop local to support the businesses currently at 461-475 Columbus Avenue: