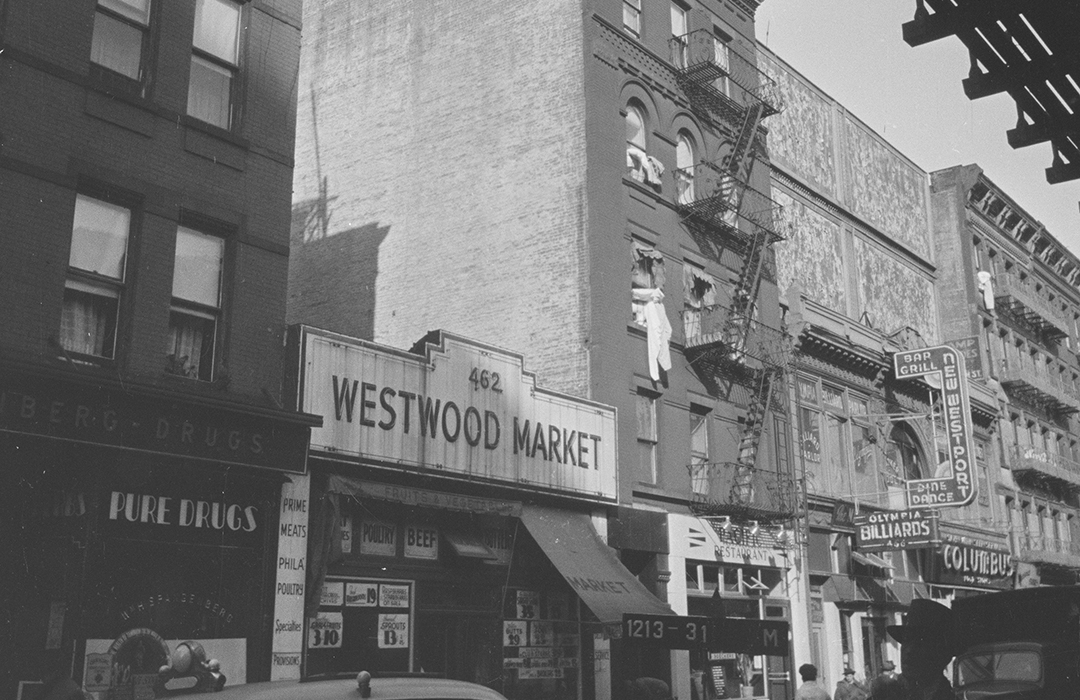 In 1886 real estate developer George B. Ferris hired architect William B. Tuthill to design a store and flat building on the west side of Columbus Avenue, between 82nd and 83rd Streets.  Completed the following year, it was the cutting edge in apartment house design—what some contemporary critics called “a happy marriage of styles.”

While the overall personality of the building was Renaissance Revival, the stone course which connected the sills of the windows on at the second and third floors was purely neo-Grec.  The Romanesque Revival style appeared in the arched openings of the fourth floor with their brick eyebrows, and Tuthill drew from the currently popular Queen Anne style for the checkerboard brickwork between the fourth and fifth floors.

Frank M. Powell, whose profession was listed as “clerk,” not only lived in the building by 1893, but owned it.  His tenants that year were Jacob H. Symmons, a printer; the widow Eliza Davis; attorney William G. Havens; Luella Know, who ran a shoe store; and Edward Markthaler, a dealer in “furnishings.”

Cynthia M. Westover had an apartment here in 1894. The self-sufficient young woman was the private secretary to Hans Beattle, the Commissioner of Street Cleaning. Her salary was ample enough to afford live-in household help, especially by procuring a maid through the Children’s Aid Society.

Although it was uncommon for a respectable unmarried woman to live on her own in the 1890’s, Cynthia M. Westover had an apartment here in 1894.  The self-sufficient young woman was the private secretary to Hans Beattle, the Commissioner of Street Cleaning.  Her salary was ample enough to afford live-in household help, especially by procuring a maid through the Children’s Aid Society.  The experience taught Miss Westover much about the lives of poor immigrant families in New York.

Her new servant was 13-year old Frances Anselena, chosen from a mission school.  The New York Sun reported, “Frances has a soft voice and big brown eyes.  She was willing to do anything required of her, and Miss Westover was soon convinced that she had a treasure in her little Italian maid.”  Living in a flat uptown would certainly have been a treat for the girl after living in a crowded tenement on Mott Street with her mother and five siblings.  Her father was serving time in the Erie County penitentiary for counterfeiting.

But Cynthia Westover began noticing that trinkets of small value were missing.  And then in mid-August 1894 a $5 bill “escaped from Miss Westover’s purse,” said The Sun.  “Frances was the only person having access to the room where the purse was when the loss ensued.”  The five dollars would be about $150 today.  The last straw came on August 22 when Cynthia’s diamond bracelet, worth more than $2,250 today, disappeared.

Frances tearfully denied having taken anything.  But when Cynthia threatened to take her back to Mott Street, she admitted “I have got your bracelet, and if you won’t take me to mother, I’ll give it up.”  She claimed to have put it on as a lark and forgot about it until Cynthia missed it.  She was then too afraid to admit she had it.

That did not explain the missing money and other articles.  Cynthia filed a complaint and Frances and her mother were ordered to appear in court.  A translator for the mother explained that the woman worked “day and night to earn an honest living” and to support her six children.  She claimed that Frances was a good and honest girl.  An agent from the Society for the Prevention of Cruelty to Children, where Frances had been sent, said the slum where the family lived “is one of the worst in the city.”

In the end Cynthia Westover, having earned a new appreciation for the trials of immigrant life in the tenement section, went without a maid.  What eventually became of little Frances is unclear.

By 1895 R. A. Greace lived in the building and ran the Smith’s Dairy Farm Co. store downstairs.  He would remain until around 1904 when Miss Sarah Schreier’s millinery shop moved in.  Sarah employed four hat makers.

Another unmarried woman to live here was Lina Ainer, who made her living as a masseuse.  Patrolman Morrison was passing by around 4:00 on the morning of December 13, 1915 when he heard a woman screaming “Fire!” from a second-floor window.  He rushed upstairs to find Ainer’s clothing engulfed in flames.  He wrapped her in his overcoat to extinguish the fire, but she was in serious condition.

It was the 27-year old’s roommate, Evelyn Gunnison, who had screamed for help.  The women had had friends in until late at night.  Lina then went to bed and placed her burning cigarette on a bedside table.  After she had fallen asleep it somehow rolled onto the bed and caught both the linens and Lina’s clothing on fire.  Although badly burned, it appears that she recovered.

Patrolman Morrison was passing by around 4:00 on the morning of December 13, 1915 when he heard a woman screaming “Fire!” from a second-floor window.  He rushed upstairs to find Ainer’s clothing engulfed in flames.

The retail space that had been home to Smith’s Farm Dairy Co. for years appropriately became the Gelato Modo store in 1983.  It was the scene of tragedy two years later when the kitchen supervisor, 21-year old Douglas Sinkfield, fired a worker, Luigi Memazzan, after a month’s employment.  Memazzan was enraged and fatally stabbed Sinkfield in the store on June 15, 1985.

The store has been home to a variety of shops since that appalling incident.  In 1987 the Giles & Lewis home store moved in; followed by the Assets London boutique in 2003.  Another boutique, Purdy Girl, opened in 2005.

Shop local to support the businesses currently at 464 Columbus Avenue: