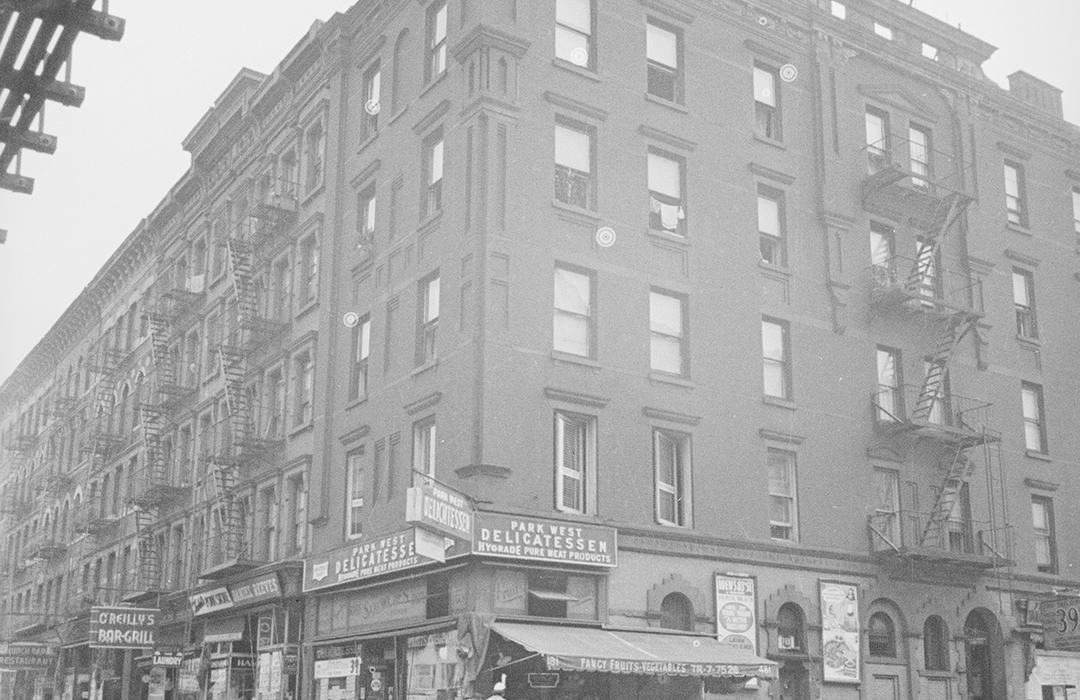 In December 1885 the architectural firm of Thom & Wilson filed plans for a five-story brick flat, or apartment building, to be built for developer Edward Purcell on the northeast corner of Ninth Avenue (soon to be renamed Columbus Avenue) and 83rd Street.  The firm projected the construction costs at $26,000—nearly $725,000 today.  Completed within a year, the building was clad in red brick and trimmed in brownstone.  Its Queen Anne design included recessed brick panels and niches, a pressed metal cornice, and a short, whimsical tower atop the corner that sprouted a weathervane.

There were two apartments per floor above the ground level.  The first floor was shared by a store on the avenue (home to the Wood & Radiker grocery, operated by Benjamin G. and John Radiker Wood) and an apartment to the rear.  The suites filled with upper-middle class tenants like architect-turned-doctor, James L. Hiller; Rev. Agathodoro Papageorgopulo, the Archimandrite of the Greek Orthodox Church of New York; and Edward A. Wright.

“Mrs. King said Wright had placed it upon her finger with words of love, and that she would not give it up, even if Wright went to jail,” reported The Evening World.  And so, he did.

Edward A. Wright’s heart outweighed his common sense in 1894.  He was infatuated with Vinette B. King, a young widow.  Wright purchased a diamond engagement ring, valued at the equivalent of $4,000 today “on the installment plan,” according to The Evening World.  But his ardor could not wait.  On October 20, 1894, the newspaper reported that he had been arrested, and charged with “disposing of the ring before he had paid for it.”  He had disposed of it by giving it to the widow King.

Vinette B. King refused to part with the expensive token.  “Mrs. King said Wright had placed it upon her finger with words of love, and that she would not give it up, even if Wright went to jail,” reported The Evening World.  And so, he did.

But, happily for Wright, Mrs. Emma Barrows interceded.  She reminded Vinette of a conversation they had had at Coney Island “which involved a wealthy Harlemite.”  She threatened to make that conversation public if Vinette did not relinquish the ring.  That possibility, said the newspaper, “caused Mrs. King to wilt.”  The ring was returned, and Edward Wright was released.  How much further their romance went is unclear.

The building was owned by Catherine McKenna, a widow, by the first years of the 20th century.  She had two grown children, Daniel J. McKenna, and Louise M. Meehan, known as Lulu.  The three shared an apartment in the building, until Louise married John J. Meehan on February 14, 1917.  The newlyweds moved into another apartment in the building.  Three months later, with war going on in Europe, Daniel joined the army.

Shortly afterward, Catherine became bedridden.  Louise acted as her caregiver and she and her husband took over the management of the building, including paying expenses, including the mortgage.  According to Louise later, her brother had been a problem.  She would testify that he “had shown no filial affection for his mother; had disobeyed her expressed wishes continually; had insisted and persisted in consorting with a woman of double his own age and of doubtful reputation.”  And so, Louise laid a plan.

While he was fighting in France, Louise convinced her mother to transfer the deed to the building to her, promising that should anything happen to Catherine, she would split the ownership half-and-half with Daniel.  Daniel returned from the army in April 1919 and, only days later, on May 14, Catherine died.  It wasn’t until Daniel saw a notice in a newspaper that the transfer of title had been made that he became aware of the fact.  It resulted in an ugly court battle that lasted until May 11, 1928.  Daniel lost the case and his half of the property.

She would testify that he “had shown no filial affection for his mother; had disobeyed her expressed wishes continually; had insisted and persisted in consorting with a woman of double his own age and of doubtful reputation.”

That same year renovations designed by architect Carl Hartzelins resulted in a second store, where the first floor apartment had been on West 83rd Street.

The building is a bit beleaguered, and sadly, its rooftop parapets and wonderful weathervane tower have been removed.  But overall, the playful Queen Anne aesthetic survives.

Shop local to support the businesses currently at 481 Columbus Avenue: