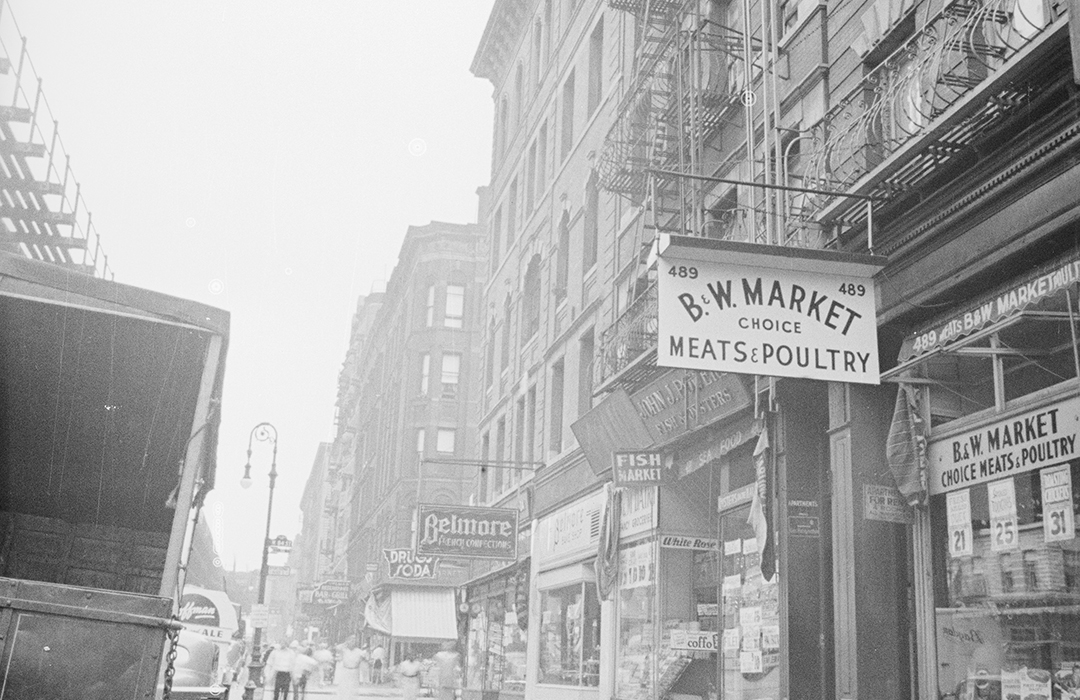 Born in Germany, architect Francis A. Minuth made his mark on American architecture with his design of multi-family dwellings. On May 24, 1890 the Real Estate Record & Builders’ Guide commented on his innovative layout of flat buildings that focused on the health and comfort of residents, noting, “All windows open directly upon an open court affording an abundance of light and air to halls, stairs, sleeping rooms, kitchens, etc.”

Two years on, real estate developer John Casey hired Minuth to design a flat building on the southeast corner of Columbus Avenue and 84th Street. Completed within the year, the five-story building was faced in brick and trimmed in stone above two Columbus Avenue-facing storefronts. The ground floor of the 84th Street side, where residents entered, was clad in rough-cut brownstone. Minuth married the Renaissance Revival and Romanesque Revival styles to create a pleasing mix of arched and square-headed windows. An ambitious pressed metal cornice, now lost, capped the design.

The corner store became home to Baluff’s Pharmacy, the first of a long string of drugstores in the space. It was operated by German immigrant Charles A. Wittenack. After being in the location for several years, Wittenack drew the attention of The Pharmaceutical Era. On January 13, 1898 it reported, “One Chas. A. Wittenack, the owner of the ‘Balluff’ Pharmacy…was proceeded against for owning a pharmacy without being registered.” Wittenack, it seems, was a “leather dealer.”

The corner store became home to Baluff’s Pharmacy, the first of a long string of drugstores in the space. It was operated by German immigrant Charles A. Wittenack.

Nevertheless, customers of Baluff’s Pharmacy seemed unfazed. Wittenack was still doing business there the following year when he commented to a reporter from the New York Journal about Paine’s Celery Compound. “It is one of the druggist’s staples,” he said, “and its sales here exceed by far those of any other remedy that is designed to purify the blood and cure nervous exhaustion.”

Next door, R. Pehlemann & Son ran one of the oldest real estate firms in the city. Founded in 1868, Rudolph Pehlemann and his son, Rudolph, Jr., ran the firm which, according to A History of Real Estate, Building and Architecture in 1898, “makes a specialty in corner property, both mercantile and residential.” The company would remain in the space into the 20th century.

Record & Guide May 24, 1890 (copyright expired); via Daytonian in Manhattan

Back at the pharmacy, records at the turn of the century show another German immigrant, Max Weiss, now running the drug store. Just a few years on, he leased an apartment on West 84th Street to one Howard E. Wooten. It nearly cost Weiss his freedom.

On October 10, 1904 The New York Herald reported, “A raid was made upon the drug store of Max Weiss of No. 495 Columbus Avenue, but Weiss was not arrested.” Unbeknownst to Weiss, his tenant was counterfeiting drugs made by F. Bayer & Co. (later famous for its Bayer aspirin).

By 1913 the pharmacy had now been run by Dr. William C. Alpers for several years. A drug store would remain in the corner space into the 1940’s. The Pehlemann firm next door was now a tailor shop.

Back at the pharmacy, records at the turn of the century show another German immigrant, Max Weiss, now running the drug store. Just a few years on, he leased an apartment on West 84th Street to one Howard E. Wooten. It nearly cost Weiss his freedom.

Residents of the apartments above were upper middle-class professionals. Dr. Henry S. Graves lived here in the late 1890’s, as did the Rev. Rockland T. Homans and his wife, Adele. Homans would go on to serve at the Cathedral of the Incarnation in Garden City, Long Island. Residents in the early years of the 20th century included city employees Eugene S. Van Ripper and Richard Joseph. In 1920 Samuel B. Wellington, the president of the West Indies Trading Company, was a resident.

But, as with many apartment buildings after the war, a 1946 renovation resulted in additional (five) smaller stores on the ground floor and a conversion to single-room-occupancy rooms (eighteen per floor) above. That configuration changed once again, in 1966, to seven apartments per floor.

Shop local to support the businesses currently at 493-495 Columbus Avenue: