Time keeps on tickin’…or does it? >>UPDATED<< 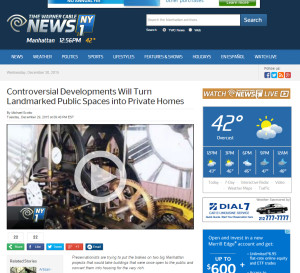 As the hours wind down on 2015, they formally stopped at 10:25 for a landmark clock in TriBeCa.  Although the clocktower is one of just 117 Interior Landmarks city-wide (all 5-boroughs!) the Landmarks Preservation Commission ruled that it was an appropriate re-use for the building to be relaunched as luxury apartments.  A similar tale is unfolding in the Upper West Side where the same legal team, Michael Hiller, Esq. is challenging developers who seek Board of Standards and Appeals variances to work around existing zoning codes to turn the 1904 Carrère and Hastings former First Church of Christ, Scientist into 39 apartments, (one duplex unit is designed to feature four bathrooms and two laundry rooms all in a sprawling 4,323 square foot 2-bedroom apartment!)

Read about it, and watch this short clip from NY1 to learn more!

In a political twist, the name Don Peebles (developer of the above mentioned clock tower project) came up yesterday when he admitted to being asked for twenty thousand dollars by de Blasio during an interview covered by DNAinfo.  This is just another example of the “pay to play” real estate landscape under this administration and yet another sign of below board tactics used by the current administration.  Preet Bharara will be busy!