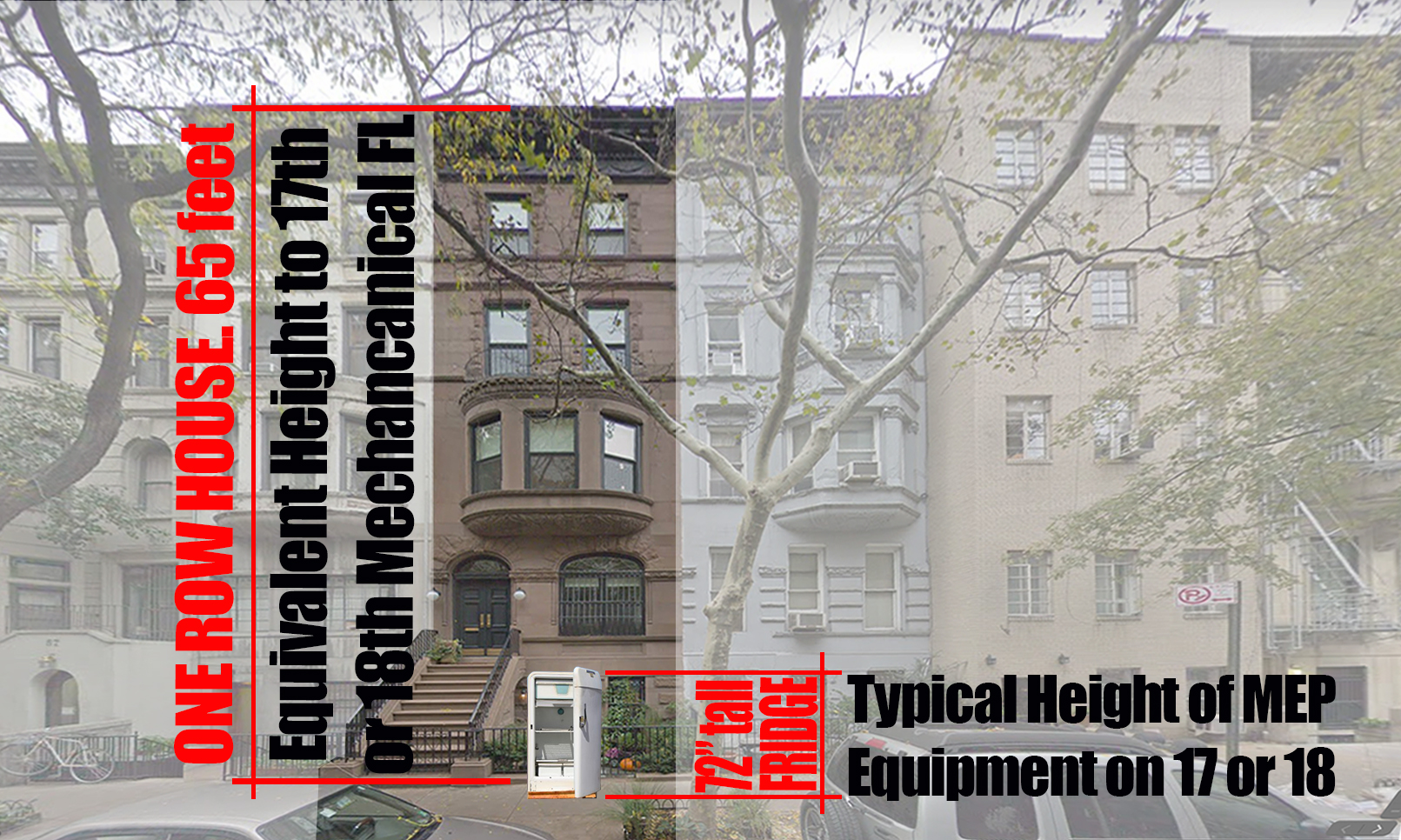 The UWS came out en force today for three and one half hours of arguments on 50 West 66th Street, the 775-foot tower under review by the Board of Standards and Appeals (BSA).
The Department of Buildings (DOB) was unable to produce the official who examined and approved the plans but explained, on record, their process: if it looks like mechanical space, they typically won’t question the use and only review for code compliance.  That “oversight” overlooked a 22-foot high 15th floor, a 64-foot high 17th floor, a 64-foot high 18th floor and a 48-foot high 19th floor–all attributed to mechanical use, even when the tallest equipment ranged from only 6 to 7 feet high!
With agencies like this, who needs loopholes?
First up today: LW! questioned how the DOB issued the developer permits for a building with 198 contiguous vertical feet of “mechanical void” space based on partially dimension-ed drawings with no equipment cut sheets for what was to occupy the tens of thousands of square feet they were claiming for deduction.
That’s not how it works, people.
LANDMARK WEST! and the community appealed to the BSA for the developer to supply a properly detailed set of drawings demonstrating the alleged need.  These drawings arrived after the DOB’s own submission, yet the agency argued that they didn’t see anything amiss. While they claim to review each building on a case-by-case basis, they didn’t happen to notice that this building of only 127 apartments is 25 feet taller than the Time Warner Center (750 feet) and somehow requires more voluminous mechanical provisions than the Time Warner Center with its mall, Whole Foods, luxury hotel, luxury residences, multiple restaurants and Jazz at Lincoln Center.
That’s not how it works, people.
LW! Lawyer Stuart Klein pointed out that the developer has, in just one example of many, reserved 864 square feet–the equivalent of a good-sized 1 BR apartment–to hold a mere six square feet of mechanical equipment. Equipment that that doesn’t need to be in that exact location. In the building, TWO void floors, EACH the height of a brownstone are claimed for mechanicals the height of a refrigerator.
That’s not how it works, people.
The developer’s argument continued in this vein and LW! continued to point out that the developer is unfairly taking massive unnecessary lateral space for these ridiculous voids that are not counting against their Floor Area Ratio (FAR) – meaning that they deduct it as a write-off and reserve their FAR to build dizzyingly high.  This isn’t rocket science. If the DOB is to review every set of plans submitted, and to determine on a case-by-case basis whether this mechanical space is appropriate, then we ask that they do so fairly, transparently, and consistently.
But, unfortunately, that’s not how it works, people.
Thank you to State Assembly Member Dick Gottfried and Manhattan Borough President Gale Brewer for sending supportive testimony by proxy for the record. The standing-room-only crowd also included members of Community Board 7 and at least a dozen neighbors who publicly voiced their frustration with the general indifference and inaction on the part of the DOB to follow the zoning code designed to protect them as well as their disdain for the greed of the Extell Development Company.  Thank you, Upper West Side!
We continue our uphill battle against loopholes with our next submission on New Year’s Eve, the deadline the BSA gave for final written statements. Cheers!
A decision is expected on January 28th. Here’s hoping 2020 brings rationality and justice to all, not just big real estate and in 2020, Let’s hope THAT’S how it works.
READ MORE IN GOTHAMIST.