Check out Tom Wolfe’s article in New York Magazine (July 4-11, 2005) about the battle for to save 2 Columbus Circle:
Tom Wolfe quotes former landmarks commissioner Richard Olcott, who in an email to then LPC chair Bob Tierney, said: “The design community needs to speak up and stop this madness put out by the Taliban.” A Talibanista in [Olcott’s] book: Landmark West.”
LANDMARK WEST! says:
The Taliban we are not.  Determined advocates, we are. 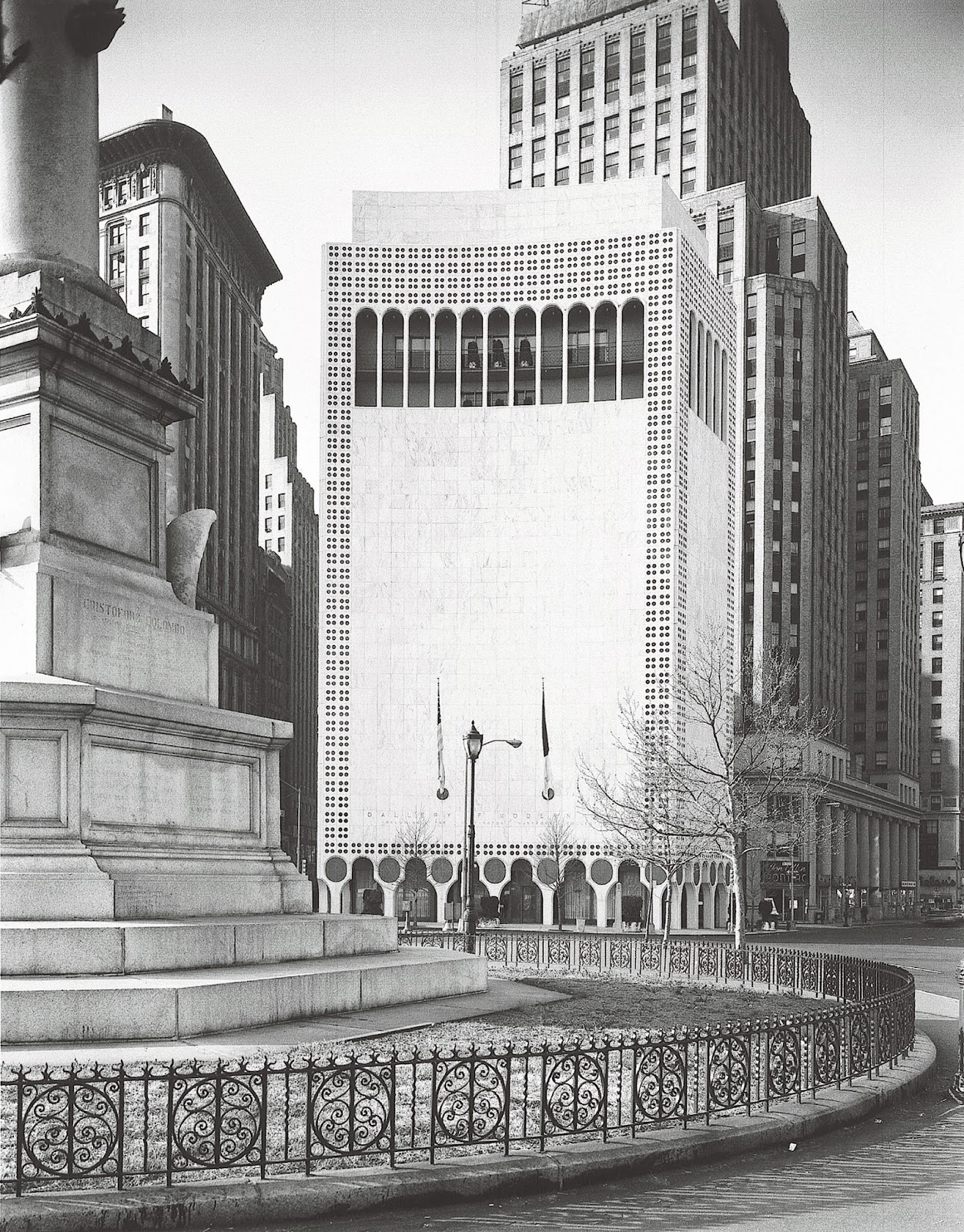 Was the Landmarks commissioner a little too close to the side that wants it destroyed? A would-be savior of Edward Durell Stone’s building looks at the latest, most dramatic twist in the city’s preservation drama.
At 9:49 A.M., Bob e-mails Laurie: “How do we get ourselves out of this craziness?”
At 9:50, Laurie e-mails Bob: “I don’t have an answer. I am speechless when it comes to Herbert . . . and to think that he is the Chief Critic for the Times!”

Loose-lipped we and ourselves lines like these from the “Bob and Laurie Letters,” just outed via the Freedom of Information Act, have suddenly converted the fate of 2 Columbus Circle, designed in 1964 by Edward Durell Stone as Huntington Hartford’s late Gallery of Modern Art, from a foregone conclusion—it’s a dead duck—into the hottest landmark battle since Jackie Onassis rode a train dubbed “The Landmark Express” to Washington and saved Grand Central in 1978. Last week things came to a boil. The building’s likely new owners (they’re in contract) had already applied for a permit to remove the marble façade. Then the World Monuments Fund put the building on its watch list of the world’s most endangered buildings, making it one of only nine Modernist structures so designated—while the Bob and Laurie letters appeared to catch the chief judge in the case, Bob, in flagrante cahoots with the new owners’ point woman, Laurie.
“Bob” is Robert Tierney, a veteran political appointee who was once counsel to Koch and is now chairman of the New York City Landmarks Preservation Commission. A Landmarks hearing on Stone’s building has never been held; without one, it can’t be saved.
“Laurie” is Laurie Beckelman, a pretty blonde networker nonpareil hired by the American Craft Museum in 2002 to run its campaign to buy 2 Columbus Circle from the city and completely alter its appearance as a brand-new “Museum of Arts and Design.” When it comes to landmarking or, as in this case, avoiding landmarking, Laurie knows the City Hall fraternity grip. She was once chairman of the Landmarks Commission herself.
The “craziness” Bob was bemoaning was the ever-mounting opposition. The specific case in point that had driven Bob crazy and left Laurie speechless at 9:50 A.M. back on January 5, 2004, was this passage from New York Times critic Herbert Muschamp’s year-end architectural roundup: “The refusal of the New York City Landmarks Commission to hold hearings on the future of 2 Columbus Circle is a shocking dereliction of public duty. Unacceptable in itself, this abdication also raises the scary question of what other buildings the commission might choose to overlook in the future.”
Bob e-mails Laurie with a sardonic “ ‘shocking dereliction’ . . . ‘unacceptable’ . . . ‘abdication.’ Other than that, I thought his comments were fine.”
Over the past twenty months, the ranks of the building’s would-be saviors have swollen from a seeming handful of “cranks”—such as Tom Wolfe, viewed as a serial troublemaker with unfortunately easy access to people who buy ink by the barrel—to the biggest landmarks coalition since Grand Central days. The most authoritative of 2 Columbus Circle’s early defenders was architect Robert A.M. Stern, dean of the Yale School of Architecture. Bob and Laurie and their allies rolled their eyes, as if to say, “Well, you know Bob Stern and his . . . notions.” But soon the numbers and the reputations (more deans of architecture and urbanism, Robert Venturi, Chuck Close, Frank Stella, and virtually every major preservationist organization) became too big for knowing eye-rolls. The pressure became yet more intense last month when another Times critic, Nicolai Ouroussoff, called the building “essential to the city’s historical fabric” and flogged the Landmarks Commission some more.
Bob himself has not said a word about 2 Columbus Circle as chairman other than to reiterate the Commission’s official position: It hasn’t held a hearing because the building doesn’t rate one. His only other comments now on the record are the Bob and Laurie letters, obtained in a Freedom of Information request by preservation group Landmark West. Aside from his lamentation about the gathering insanity, he has mainly offered Laurie tactical help. In May 2003, under the heading “2 Columbus Circle—The Ox is in the Ditch,” Bob e-mails Laurie a Landmark West appeal to the troops to lobby a community board before it votes on the fate of the building: “Just so you know what they’re up to.” Later Laurie e-mails Bob letting him know her side won, “but I see trouble ahead.”
Bob replies, “Let me know how I can help on the trouble ahead.”
Landmark West has filed a lawsuit charging that Bob has colluded with Laurie and asking that he recuse himself from all future consideration of 2 Columbus Circle.
Ah, the craziness . . .
As recently as six months ago, a member of the Landmarks Commission, Richard Olcott, an architect, had e-mailed Bob about a Museum of Arts and Design symposium to be attended by prominent architects. “I think you should call up Laurie Beckelman and get her to strongarm every invitee on this list to write a letter about it. The design community needs to speak up and stop this madness put out by the Taliban.” A Talibanista in his book: Landmark West.
The craziness . . . and now madness on top of craziness . . .
Asked for a response to the lawsuit and the World Monuments Fund’s concern about 2 Columbus Circle, Bob replied via an e-mail from a spokesman, “Three landmark chairs, under two administrations, have carefully considered this issue and determined not to proceed with the designation process. The World Monuments Fund listing contains no information that would change this decision.”
He declined to elaborate upon the Letters, since “this matter is under active litigation.” Laurie was not available for comment.