Vail’s View of the UWS Valley 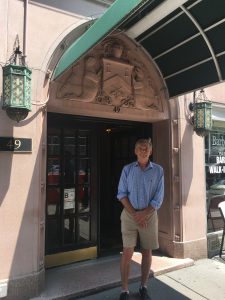 Architect Thomas Vail outside his home at 49 West 72nd Street

Architect Thomas Vail grew up on a dairy farm in Westchester, NY, where his family had lived for eight generations. Now largely partitioned, it is now known as Vail’s Grove on Peach Lake. In high school, while working in a local engineer’s office, he surveyed sites for mapping throughout Putnam County, NY. Thomas moved to New York City in 1979 after completing architecture school at Syracuse University. Having been hired at Skidmore, Owings, and Merrill he responded to an ad for a one-room penthouse apartment at 49 West 72nd Street.  He met the landlord wearing his Brooks Brothers suit and generally impressed her that he had a good job. He never could have known then how much the Upper West Side would become part of his work and family life, a place he continues to love and cares about enhancing.

When Thomas moved into that penthouse room, he was struck by how appropriate it felt to be looking out on a “valley” of all the variety of buildings that distinguish the Upper West Side, the brownstones, pre-war apartment houses and distinctive towers. From his terraces, rooftops with and without plantings are visible everywhere. Yes, terraces. Over time, Thomas assembled two adjoining apartments with his own. Combined, the terraces look out in every direction. The potted orange tiger lilies only bloom a few days a year; Thomas’ mother died 5 years ago, and these flowers come from her garden and keep her in the family garden in continuance.

The home is striking in its simplicity, clean lines and well-conceived design solutions that maximize comfortable living for Thomas, his wife Debra and their two sons who are 16 and 21. Clients are certainly impressed to sit out on the south facing terrace to discuss design options with their architect.

For many years, Thomas and his team worked out of a brownstone he had renovated at 59 West 94th Street. The brownstone appeared in the movie “A Thousand Clowns” with Jason Robards. Covid-related economic impact meant belt tightening, closing that office, and working from home. Peter King, who oversees much of the interior design, is a long-time associate and “life-time friend” works from his own home at Tudor City. “Things are getting better,” Thomas says things are busy again as his commissions from individuals and developers are returning with new projects post-Covid.

Thomas started his career doing corporate design, but he started Vail Associates Architects in 1990 and his work also includes examples of new homes in Westchester, NY, Washington, CT, Cape Cod, MA, and other parts of the eastern seaboard.

Within the city, he had extensive experience navigating projects related to brownstones and other historic buildings in various parts of Manhattan with clients and the Landmarks Commission to meet the interests of both. “You have to work together to find the buildable solution and preserve the architectural heritage” he says.

An early success was the total renovation of an Upper East Side townhouse that had one been the illustrator Charles Dana Gibson’s studio. When the New York Times architecture writer Christopher Gray described the project in a 1999’s article Streetscapes /127 East 73d Street; A 1904 Neo-Federal House, built by the Gibson Girls, he noted. “On the top floor, behind the mansard, Mr. Vail has created a pine-paneled playroom out of a double-height sky lit space. It has a basketball hoop, climbing ropes and other equipment. Mr. Vail said he is a little disappointed because it is at variance with its original use — ”it was Gibson’s painting studio,” he said.”

Among many different challenges two specific recent successes come to mind, one on the East Side required an ingenious solution to replacing a stunning but deteriorating arched window that spanned the brownstone.  Requiring Landmark’s approval, the reproduced window looks identical to the original and functions optimally while adding a double-glazed feature for energy conservation.

On the Upper West Side, one of Thomas’ commissions was to entirely restore a brownstone to its original use as a one family home.  The house had been divided in early years to contain 10 apartments and was a wreck and certainly not up to building safety codes. At 312 West 88th Street, the original facade had been covered in unsightly 1950’s brick veneers. The client needed every bit of space for himself, his wife, six children and a live-in nanny. Challenging does not begin to describe the project, but the place is a showpiece.  “Kitchen on the first floor, parlor floor with living and dining rooms, master bedroom floor and bedrooms above for the children and nanny.” An elevator was also installed. Thomas has also recently completed nine “boutique” style condominium buildings which have the proportions of brownstones but are designed as one apartment per floor, five floors, five apartments.” not a whole building per owner, but at 1,500 square foot unit, all new, private floor – not so shabby.”

Other notable projects, Thomas says are those that include apartment renovations and combinations at 65 Central Park West, “a lot of combinations ($1.5-$2 million USD) at the San Remo and extensive work including the lobby restoration at 65 CPW and projects at the Century, also on Central Park West.  Here, while respecting historic architectural authenticity, all new kitchens, and baths were designed with contemporary amenities in upgrading the apartment’s interiors.”

Thomas has been a board member of his own building for 37 years and is proud of being part of the team’s efforts. The group is currently involved in major projects that include redoing the sidewalk in the front of the building, modernizing the storefronts, and redoing the rear yard and side courts for a future garden. Built in the late1920’s and designed by architects Margon & Holder the board is committed to maintaining this pre-war gem. You know you have arrived with the entry’s pediment’s seal figures, a tribute to the NYC fur trade, which was the rage of the time.