We Have Time to Burn, Let’s Burn it Listening to Records 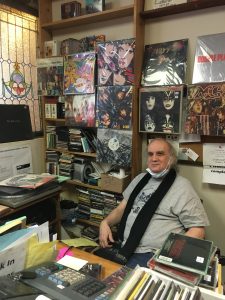 Dorian Thornley is the owner of Westsider Books and Westsider Records with shops on 80th and Broadway (2246 Broadway) and at 233 West 72nd Street.  Most of the records are for sale at the 72nd Street location where Bruce Eder has been Manager since 2012.  Eder’s easy banter and joie de vivre speak to older customers who remember the laid back congenial conversations between literary types and music lovers of the old Upper West Side.  It also resonates with younger customers who are awed by this former journalist, film writer, and audio/video producer whose work appeared in the Village Voice, Newsday and other publications.  He tells riveting stories about his lucky break in finding a role in the recording business as an annotator and producer, and as an audio commentator for laserdiscs in The Criterion Collection, which included his on-disc audio commentaries on classic movies including The Devil and Daniel Webster (1941), starring Walter Huston; and 49th Parallel (1941) with Leslie Howard and Laurence Olivier.  Laserdisc technology, which was very popular in Japan and somewhat less so in the US 30 ago, was overtaken by DVDs.

A long time customer of the shop, Eder became its manager in 2012 when he retired from recording and writing.  He frequently remarks that becoming the manager, like other important moments and opportunities in his life came about by simply being in the right place at the right time.  He admits he’s heard comments that he’s perfect for his job as manager and acknowledges he is as comfortable talking about  rock, jazz, blues, country, and gospel — and knows his way around musicals and soundtracks — as he is about classical composers.

Eder has lived for years up by Columbia.  Although he’s never traveled outside the US, and hasn’t been out of Manhattan in ten years, a practice he has particularly enjoyed is playing music in the shop that is familiar to some of the many international visitors.  When, for example, he realized two shoppers were from Serbia, he put on a record of Indexi.  “They sounded just like ‘Deep Purple’ and were the first major rock group of Yugoslavia.  The wife was dancing in the aisles,” say Eder.  Another time he surprised a customer from Turkey by playing an Erkin Koray record.  “He’s like the Elvis of Turkey but he went from rock to psychedelic and beyond…she started to cry.”

Which vinyls are the most sought after?  “A Johnny Cash record, Gospel or Country, would last about 30 minutes here,” says Eder.  Among others that are hard to keep in the shop, are the Beatles, Rolling Stones, Nina Simone the Talking Heads, Captain Beefheart, the Velvet Underground and Miles Davis. Glenn Gould sells as much as the Beatles “though he probably wouldn’t have been happy with that, because of his ego.”  Among major classical composers, Berlioz is something no one wants, but Shostakovich, Mahler, Mozart, Chopin, Satie, Ravel, and Debussy are sought after along with recordings of Bach, Beethoven, and Handel.  Among the most popular opera recordings, music by Verdi, Wagner and Puccini lead the pack.  Eder said he convinced one customer recently that she had come upon a nice find with a double-LP set of a 1945 performance of La Boheme conducted by Toscanini.  “Although it’s a concert performance rather than a full production, it’s worth owning — the singers were fine, and Toscanini had conducted the premiere of  the work in 1903, and that score was part of him.”

Where do the records come from?  People come in to sell a collection or weed it out; a family may decide to part with the collection of a relative who’s passed away and sometimes a superintendent has been asked by a landlord to clear out an abandoned collection of records.  “We also once retrieved a huge body of sheet music from in front of a nearby building that were otherwise going to be put out for recycling — the owner, a longtime musician and teacher, had moved into an assisted living facility and the family didn’t want his collection of scores, some of which were in manuscript form and others of which had been inscribed to him by their composers.  It was mostly other musicians, of a younger generation, who ended up getting most of those.”

The comfort of the store makes you feel if you search you will locate a special find.  No rush, Eder assures customers.  The store is open every day of the year.  Closing hours are “completely subjective,” says Eder.  “If the regular store closing hours say 7pm, but there are people here, and everyone’s having a good time, I’ll stay till 9.  Where am I going to go during this pandemic time. Am I going to the theater?  We have time to burn, let’s burn it,” he says suggesting that listening to records may be just what’s needed and doable.