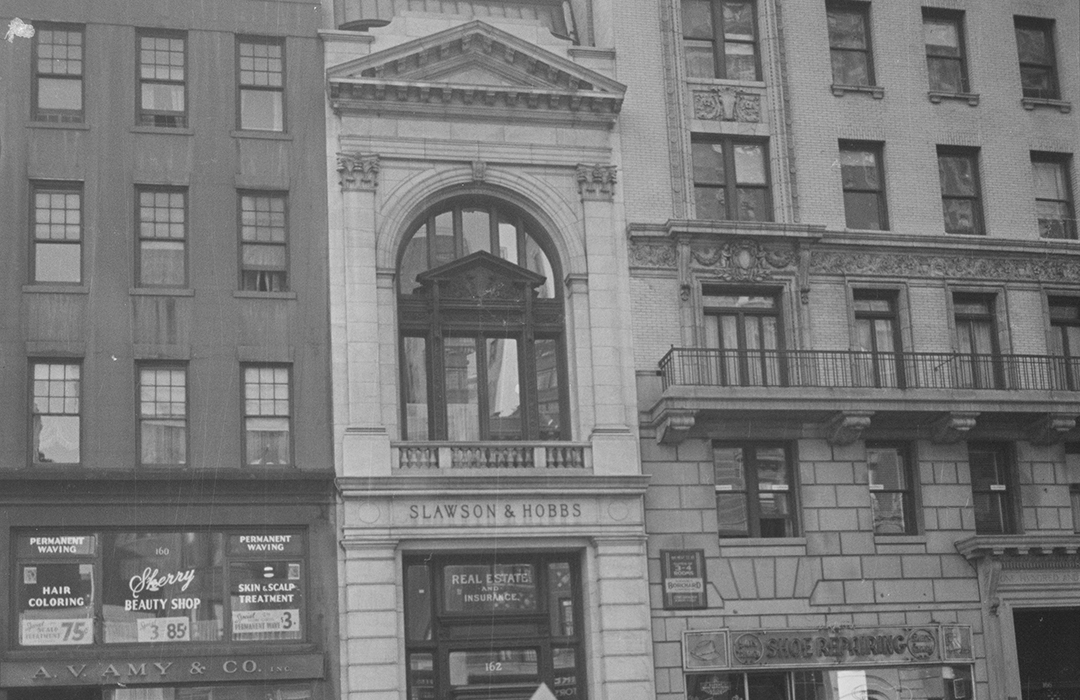 The Most Complete Office Building in the Real-Estate Business

The most complete office buildings in the real-estate business

In the 1890’s, the family of David S. Brown lived in the handsome brownstone house at 162 West 72nd Street.  Built in 1884, it and the neighboring homes were the scene of glittering receptions and dinner parties.  At the time, George Lemuel Slawson and Frederick G. Hobbs operated their real estate office at 284 Columbus Avenue.

The partners had established the firm in 1889 when the Upper West Side was developing at a dizzying speed.  By the turn of the century, Slawson & Hobbs was perhaps the most significant real estate firm in the district.  In a single ad in 1901, it listed 32 houses for lease.

Within a few years of that advertisement, the personality of West 72nd Street began to change.  Once an exclusive residential street with restricted traffic, it increasingly saw the encroachment of commerce.  One by one, families like the Browns left for quieter surroundings.  And, with its business overtaxing its Columbus Avenue headquarters, Slawson & Hobbs purchased the former Brown residence, demolished it, and hired architect Henry Ives Cobb to design a modern office building.

By the turn of the century, Slawson & Hobbs was perhaps the most significant real estate firm in the district.  In a single ad in 1901, it listed 32 houses for lease.

The Real Estate Record & Builders’ Guide pointed to the fact that Slawson & Hobbs was abandoning Columbus Avenue for West 72nd Street as “a prophecy of the complete transformation of a residential street to business purposes within a brief period of time.”

Faced in gleaming white marble and trimmed in bronze, the building was completed in September 1910 at a cost of $50,000–just under $1.4 million in today’s money.  The Record & Guide reported: “The interior will have an equipment comparable with any real estate office in the city.  Special furniture in the Mission style has been designed, and it is the intention to make this one of the most complete office buildings in the real-estate business.”  The New York Press described it simply as “most luxurious.” 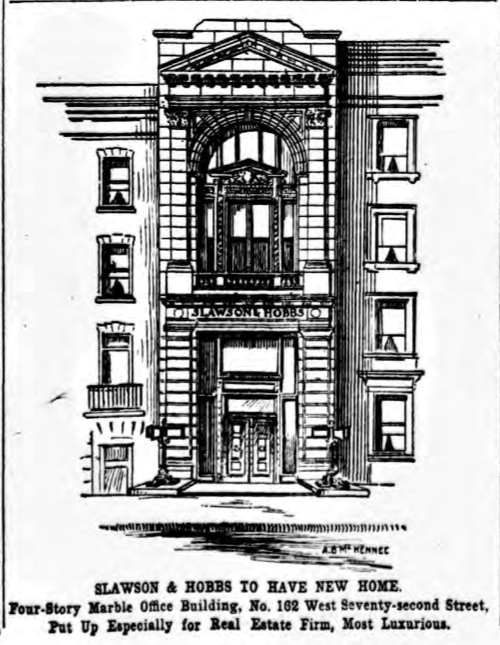 Among the staff in their new headquarters was Edgar Cadmus, who had been hired on July 23, 1901 when there were just 14 employees.  Years later he recalled that on his first day “Seventy-second street was a park thoroughfare, lined with trees, the Broadway subway was but an open ditch and the only means of rapid transportation to the downtown area was the steam-drawn engines on the opening-air Ninth Avenue ‘L’.  The Fifth Avenue Coach Company was using horses in stage-coach fashion.”

Thirty-five years after that first day Cadmus was still working for Slawson & Hobbs.  He had risen to the position of vice president and, according to The New York Sun on July 18, 1936, had earned “the distinction of selling more private houses than any other individual in the city.”

Cadmus’s long career within the firm was not especially unusual.  Frederick Howes Birch joined Slawson & Hobbs in 1891.  Almost five decades later, he was still with the firm when he died at the age of 72 on July 17, 1940.

according to The New York Sun on July 18, 1936, had earned “the distinction of selling more private houses than any other individual in the city.”

Slawson & Hobbs remained in its marble headquarters building until 1947.  The ground floor was altered for Gartner’s Hardware store, which had been incorporated seven years earlier.  It would be a familiar fixture on the block at for decades to come while upstairs a variety of small tenants from Allstate to Gala 72 to Kuzmuk Realty and others came and went.

In what might today be termed a “what were they thinking?” renovation, the tall mansard level was remodeled in 1964.  The face, which now rose straight up from the lower facade, featured a 1960’s style arcade which fights defiantly against Ives’s dignified 1910 design below.  As a final affront, the bronze Greek temple inset within the large arch of the middle section was scrapped and a panel of white brick installed in its place.

In the meantime, Gartner’s Hardware returned here in 2017.  The upper floors continue to be home to small tenants, several of them in the medical profession.