A Bit of Glitter Shine 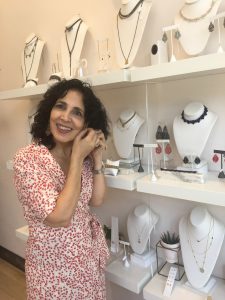 On a balmy spring day Ruth and Scott Bienstock are standing at the open doorway of Outlette, their jewelry store at 220 Columbus Avenue.  Locals stop by to chat or wave hello as they go by.  This is totally Columbus Avenue’s small town vibe, but the jewelry is ultra-sophisticated and cosmopolitan both in its utter simplicity, uniqueness and wholehearted commitment to representing a huge diversity of designers from all over the US and the world.

Though you can’t tell just by looking at a grouping of stackable thin flat gold bangles, in this moment when resilience matters more than ever, Ruth points out how much it means to her that every sale benefits a range of people involved in every piece: the designers, and their casters and setters, the packaging  companies, and on and on to the boutique owners.  Customers appreciating this idea or just wanting to support local business owners and neighbors have “been wonderful.  We’re still here,” Ruth says.

Ruth was born in London and grew up there.  At age 20, she and her sister came to  New York when their Iranian mother moved to the city to be among many family members who were already living in Manhattan, New York.  Enthusiastic and entrepreneurial, she launched herself into the field of real estate working for Corcoran for 16 years.  Along the way she and Scott, who is from Little Neck, Queens, met on the Long Island Railroad.

They married, had two children, a son and a daughter who are now in their 20’s.  Arriving on an unconventional life course, “a new normal” that suits them both, they divorced after 23 years, continuing to be good friends who work together. “My kids say their parents see more of each other than the parents of their friends who are married,” says Ruth.  They are wholehearted Upper West Siders.  Scott lives in a walk up on West 76h Street and Ruth lives in another walk up on West 86th Street.

Scott was the first of the two to enter the jewelry business where he worked for many years in the wholesale of fine jewelry.  When he decided upon his lifelong dream of opening a store, his partner in the venture was Ruth’s cousin.  But, Scott found that Ruth’s sense of color, design and her intuition about what exactly was beautiful and would sell were essential to the business.  So, Ruth, who was tired of real estate, said, “I’d lost my passion,” joined Scott as a business partner, and her cousin opted out.  They started out with their first store on 23rd Street near 5th Avenue, and then moved about three years ago to a tiny shop at 228 Columbus Ave.

About two years ago, holding their breaths because “it was very risky, but no risk no reward,” Ruth says.  They moved into the large, light space they currently occupy and that has allowed them to expand to the sale of bags, handmade ceramics, planters and candles.  We’re committed to being helpful,” says Ruth.  “Whether a customer is buying something for $20 or $200, the showcases are open, they can touch and try things on. Everyone can use a bit of glitter shine in their lives.”

The Outlette website includes photographs of the featured designers, biographies including their intriguing artistic evolution and images of their work.  Ruth and Scott care about knowing the artisans they represent and want customers to appreciate them too.

The first designers they approached were Katie and Michael of K/LLER collection.  Ruth had owned a brass and porcupine quill necklace of theirs for a while and had received so many compliments.  As designers of the coveted Vogue CFDA award, Ruth and Scott weren’t certain that they would agree to be carried by a small, new business, but at their first meeting they clicked and Katie and Michael respected their risk of opening a brick and mortar store in the midst of all the large neighborhood chain stores and now K/LLER is one of their most successful designers.

Scott and Ruth put the store’s selection together from scouring trade shows.  Both must agree to include a particular piece.  Sometimes finds are impromptu.  Ruth just stops someone on the street with the question, “where did you get that?”  Then, that’s just how some customers find Outlette by questioning someone who’s wearing a pair of beautiful earrings that look like delicately colored crocheted metal, made by a Parisian designer Lorina Balteanu, that are among Ruth’s many personal favorites.