A Fine Cup of Tea: Relaxing and Restorative 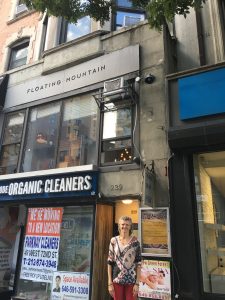 Though New York City is where she worked for two decades in corporate finance, this one-time resident of the Ansonia, who has most recently been living upstate with her artist husband and children, Elina Medvedeva brings an enticing undefined foreign flavor to the Floating Mountain Tea House.  The venue was first launched in 2017, closed in 2020 and has now just reopened this month. Located at 239 West 72nd Street on the second floor, the tearoom looks out on 72nd Street through a large window that faces south providing what Elina calls, “a magical light.”  Seating is on cushions placed on mats by the window, or in chairs by a bar for tea service or at a table.  The mood is unpretentious and inviting, suggesting at a glance that this may become a treat to offer oneself or share with a companion.

The space might be a “find”—a favorite spot in any one if a number of European cities, Paris, Amsterdam, Copenhagen, London or perhaps Krasnoyrsk, Siberia, where Elina was born and where her mother still teaches gardening.

Elina says tea (to keep warm) is very important in Russia and Siberia is far more Asian than the cities like Moscow and St. Petersburg, which are greatly influenced by Western Europe.

The vibe at Floating Mountain is quiet, restful and artful. The lighting is subdued and mostly jazz plays in the background.

How did Elina decide to change careers after 20 years in the finance field to open a tea house? She responds, “I knew I didn’t want to retire from a job in the corporate world. I was considering a number of things. The idea of opening a tea house seemed right. I was practicing yoga with a teacher in this building. She told me about the space when it became vacant. I decided this was it on my trip downtown and signed the lease the next day.”

Tea is the main point. And, five varieties are on the menu: Green, White, Red, two types of Wulong and Dark Teas. As tradition has it, food is not served with tea. Around the time Elina was leaving the corporate world she had a chance to join a group of people who were going to China to explore tea farms. On the tour of tea plantations, she made friends among the tea producers, three of whom became her suppliers of tea once the tea house opened.

Tea has a complicated, fascinating history going back thousands of years in China. Pouring a cup of amber-colored tea, Elina says for example that this Qi Lan Chinese tea was the inspiration for Earl Grey Tea. Prime Minister in the 1830’s Charles Grey, was a big tea enthusiast, particularly of the Qi Lan brew.  When the English began tea production in India, they mixed Indian black tea with bergamot to approximate the taste of the Chinese tea from Wuyi Mountains.

Elina suggests potential customers make a 90-minute reservation to ensure they will not need to wait to be seated. If the tearoom is not full, customers may stay as long as they wish. Elina offers 10% off the total bill for those who reserve the table/bar. She requests a $10 reservation deposit, which is applied to the final payment.