A Patch of Pavement with Unexpected Details 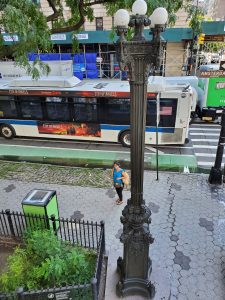 Belgian entrepreneur Alain Coumont, Founder of the Le Pain Quotidien bakery chain, was certainly among the influencers who made croissants and hearty sourdough loaves vie for the love of bagels among New Yorkers.  Opening in 1997 in NYC, early on, the look of Le Pain Quotidien (like the one once at 40 West 72nd Street) featured communal tables evoking farmhouse conviviality.

Over time new looks took hold. On a patch of pavement that’s part of the Broadway Mall on West 72nd Street, for example, a one-time newsstand, built in 2002, became a snack bar version of Le Pain Quotidien. The kiosk cafe building was inspired by the style of the original 1904 station house on 72nd Street and Broadway to complement the larger station, designed by Dattner architects, that was built across 72nd Street along with a plaza expansion of Verdi Square. These were all part of a $50+ Million MTA renovation of the 72nd Street Subway Station completed in 2004. The patterned glass faceted station atrium ceiling was designed by artist Robert Hickman, and is inspired by Verdi’s sheet music notation for the opera Rigoletto.

Then, in 2015, NYC Parks finding the newsstand kiosk redundant with the older one operating at the earlier historic station, considered razing the newer concession and replacing it with a food truck. However, in 2016, Le Pain Quotidien took on a lease.  The business has weathered some ups and downs with the NYC Health department, but is now open serving up steaming coffee and croissants daily. 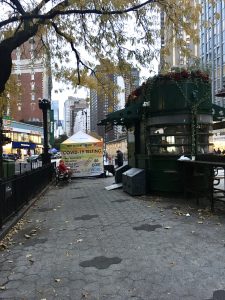 In sharp contrast to the fanciful European style snack shop with outdoor bar-style seating, is a recently installed tent with Covid screening services provided by Lab WorkQ. Shelters for clinical services of this kind, never imagined before the pandemic, have become familiar. They are now provided by a variety of labs everywhere in NYC. The screening services offered under colorful temporary tents are a convenient resource for the public. They are also an ongoing reminder about the need to be vigilant in preventing the spread of a deadly disease. Screening service workers are realistic. They don’t know if the tents will be up for one month or many more.

Virtually rubbing shoulders with the kiosk cafe and the Covid screening tent is an artifact with a provenance of another century and location. This ornamental five-globed street lamp is called a luminaire or torchiere.  It was created as one of a pair that once stood at the base of the grand staircase leading to the Firemen’s Memorial on Riverside Drive at 100th Street. A park photo from 1935 shows them there, though curiously the Art Commission approved street lamps for the monument in 1913 show an entirely different design, and no public records have been located referencing these. Over the next decades, the graceful lights were vandalized. One disappeared, while only a portion of the surviving lamp was recovered and salvaged in NYC Parks Department storage for many decades. It started a new life during the period of the 72nd Street renovation project.

Retrieval of the damaged artifact from storage and its installation on 72nd Street is thanks to Henry J. Stern who was then Parks Commissioner. He was passionate about placing animal art in the parks of New York. He commented in a 1997 NY Times article, that in the previous three years, “300 pieces of animal art had been added to his agency’s 1,400 properties. Until then, he said, the animal art numbered ”in the dozens.” With the expansion of Verdi Square precipitated by the street de-mapping and new 72nd Street subway station, Stern suggested that the park’s new perimeter fence feature a decorative detail of parading elephants—a nod to the sculpture of the Ethiopian princess Aida, one of four characters from Verdi operas personified in marble on the monument. The Art Commission rejected the proposal and requested that the proposed “ornamentation and fence should be limited in scope so as not to detract from the monument.”

As a back-up plan Stern turned to his then Manhattan Parks Commissioner Adrian Benepe, formerly the Parks Department’s Director of Art & Antiquities for recommendations of salvaged animal art that might be placed at Verdi. Jonathan Kuhn, current and long-time director of NYC Parks Art & Antiquities, says Benepe recalled that this particular luminaire had ornamental sculptural detailing of goats and lions. Kuhn noted that while the goal of his department is first and foremost to restore salvaged monuments and artifacts to their original locations, decorative objects that have been long disassociated from their outdoor setting may on occasion be adapted to a new location so they may be enjoyed by the public rather remain out of sight and consigned to perpetual storage. The MTA’s Verdi Square expansion presented such an opportunity and the Art Commission- approved the revised plan.

Kuhn also explained the origin of the decorative cast-iron urns that serve as planters in Verdi Square plaza’s north end. These are modified from a type originally designed by Stanford White, and cast in bronze that were installed around the Grand Army Plaza entrance to Prospect Park. The originals included cobra-handles, a detail that rendered them prone to vandalism. Kuhn and his staff urged the removal of this element along with some surface detailing in the replicas intended for Verdi Square, to provide greater security for these objects, and also compliance with ethical standards for historic preservation, ensuring that they be differentiated from the original site-specific historic urns. NYC Parks keeps an extra in storage for archival purposes.

The bronze luminaire’s animal motif, which in addition to lion heads, depicts heads and hooves of goats, contributed charm and continues to be an elegant fit for the renovated subway plaza. Missing sculptural and ornamental components were modeled and cast based on a historic photo provided by the Parks Department, and united with the surviving portion of the light pole. The lamp was installed in November 2004 at the south end of Verdi Square, to coincide with the completion of the subway renovation, and the pole is inspected, cleaned and rewaxed to protect the bronze on an annual basis by the NYC Parks Monuments Conservation Crew. The roaring lions and other details of the animal-themed ornamentation can be admired by passersby as they cross over this patch of pavement, grab a croissant, get screened for Covid, enter the subway or just cross the street.