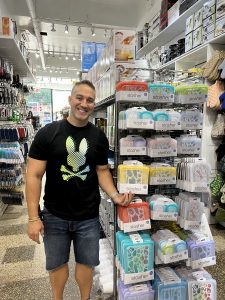 “If you come in asking for a pink hammer, it’s likely that two more people will come in asking for pink hammers,” says BasicsPlus Store Manager Rafael Villar. He explains the hardware store’s commitment to flexibility and to being in sync with customers’ needs and the trends that they follow when buying hardware store items. This BasicsPlus store opened at 2315 Broadway about 18 years ago and has many fans. “I just love this store. They have everything,” says one man as he pays for an assortment of household goods.

Curiously, enthusiasm for the store is both for BasicsPlus the way it is now and also for the hardware store that preceded it. The grandparents of many locals may remember the time when it was called Riverside Hardware owned by Holocaust survivor Stanley Stern, his wife Olga who survived the fascist’s terror in Budapest, and their daughters. Villar says older customers still call the store Stanley’s.

Riverside Hardware was first opened by Stanley in the early 1950s on Columbus Avenue and 93rd Street. Later, Stanley moved to a small store occupying half the space of BasicsPlus at 2315 Broadway. Ten years later, the BasicsPlus hardware store group owned by Zvi Cohen expanded this location into a former liquor store next door. In the doubled space they continued to transform the atmosphere and merchandise.

Stanley’s not only had the classic hardware store jumble of bolts and screws, wires and string but was heavily stocked with mid-century and earlier houseware finds. According to The New York Times, ”Stanley Stern, proprietor of Riverside Houseware…has sometimes placed a new and old version of the same object side by side in his shop window. ‘Invariably,’ Mr. Stern says, ‘customers will pay the higher price of the old one, saying they had not seen one like it since their childhood.’”

In contrast, BasicsPlus is bright and spacious, and user-friendly. Everything is shiny and new. What’s notable is the huge variety of items housed in the immaculate, well-ordered 2-story 4,000 sq. foot space. Not only are plungers and brooms on offer, but basic household cleaners are displayed along with upscale laundry preparations, laundry baskets, and $200 shopping carts. Reading glasses are also for sale and so are a beautiful assortment of flowered Caspari cocktail napkins, scented tins of luxury candles, and an assortment galore of coffeemakers. Baskets and bins for home offices are shelved across from a wide range of chargers. Great, practical gift items like lovely simple wooden salad bowls and serving utensils are also for sale. Yes. Gift cards and gift bags too.

The concept of clever conveniences is highlighted by a display of reusable sandwich bags in many sizes. There are also theme-printed soft round plastic discs intended to help twist off resistant jar tops. Need a lamp rewired? Knives are sharpened and duplicate keys are cut – it’s all here with a smile.

Rafael came to New York from the Dominican Republic at age 18. He earned an Associate’s Degree and an MA in business from Baruch. He lives in New Jersey with his wife, son, and daughter. Enthusiasm doesn’t begin to describe his devotion to the store. He also manages an additional two BasicsPlus stores among a total of five, in other parts of the city.

Rafael is proud that the business struggled through Covid and has survived despite the challenge of numerous staff members leaving for personal reasons. Rafael and his employees consult and advise customers in a way that shows concern to meet their needs. They are always very much attuned to finding a way to get you what you need even if they don’t have it. You feel sure they are not going to let the grass grow under their feet in serving you.

As BasicsPlus thrives with its commitment to customers’ needs and interests, the legacy of Stanley Stern lives on beyond this Upper West Side address.

Describing her life and Stanley’s during WWII in a series of videos produced by The Holocaust, Genocide and Interfaith Education Center at Manhattan College, Stanley’s wife Olga Stern shared details to support the continued memory of the Holocaust. The museum of Jewish Heritage exhibits a set of prayer objects called tefillin Stanley found while he was a prisoner at Buchenwald Concentration Camp. He kept these objects throughout the war. Stanley later incorporated them into talks he gave for students throughout NYC. Stanley donated these precious, storied religious artifacts to the Museum of Jewish Heritage in 1996. The video testimony of his experiences in WWII is part of the museum archive. Access may be arranged by contacting the museum.