A Spot in the Sun 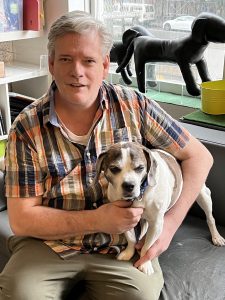 Dean Vogel never expected to fall in love with a dog. But, that happened and it changed his life.

Going back about 15 years ago, the longtime Upper West Side resident acquired an 8-week-old Dogue de Bordeaux. He named her Daisy. Even from the start, Dean enjoyed every moment with his russet-colored puppy with the dog run at 87th Street in Riverside Park being their daily destination. Very soon he realized that he would have to change direction professionally if he wanted to have the time to fully enjoy his dog.

Dean’s successful fundraising efforts to improve the local dog parks at both 87th Street and 105th Street in Riverside Park led him to the idea of opening a dog daycare, boarding, and grooming business that was attentive to the requirements and preferences of both clients and their much love pets. He opened Dog Days of New York located at 2581 Broadway about ten years ago.

This is not a casual matter. Owner’s drop off their dogs at Dog Days each day; many with medications, instructions and concerns. On one recent morning, a client handed Dean the medication her dog needs for dry eye. “Goodbye honey bunny,” she told her little pooch as she left him off for a couple of days. 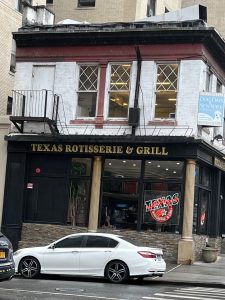 Dean explains that dogs, like people, have very specific preferences. Like what? Well, Dog Days is situated in a very large space with 17 windows.  Dean says on nice days, dogs vie for a spot in the sun. “It’s like the lines waiting for a beach chair in the sun in South Beach,” Dean says. How dogs prefer their food served also requires attention. “Some dogs like to eat on a plate, others from a bowl or by hand. Some want company. Others prefer privacy. The dogs are fed individually in the kitchen. They are walked along Broadway and/or on Riverside Drive.

Paintings of Dean’s first dog hang in the entry. She passed away a few years ago. Today, his own dogs. Henry, a Beagle-French Bulldog mix, and G.G. a large, muscular Dogue de Bordeaux come to work with him.

A very big plus for Dean is the interactions he has with neighbors. “Having a dog makes me feel much more a part of the broader Upper West Side community. Now, I don’t go more than a few steps before having a conversation with someone who has a dog. It really is nice.”

Of course there’s a fair amount of barking that goes on at Dog Days where dogs are mostly not kept in crates. But, Dean takes this all in stride. Clearly, his love for dogs is not casual.