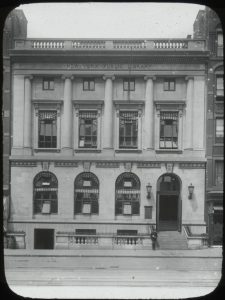 An earlier incarnation of the former Public Library at 190 Amsterdam Avenue, before the current (adaptively reused) structure was built.  Image Courtesy NYPL

The West End Synagogue, at 190 Amsterdam Avenue, is distinctive in its commitment to combine traditional Jewish spirituality while addressing such immediate contemporary concerns like interpersonal relationships, the environment and antiracism, antisemitism and other social justice issues.

One of only two Reconstructionist synagogues in Manhattan, it is in a borough that offers an enormous number of options from which potential congregants may choose as a place of worship that best suits their interests, spiritual needs and social service goals.  Some join the Synagogue initially because of the education program available for children in a place close to their home and then become involved themselves, Rabbi Emily Cohen says.

The Synagogue began 1985, in a small chapel in the back of what was then the Lindenbaum Center at 270 West 89th Street.  It then moved in 1996 to its present 69th Street address in the former Riverside Branch of the NY Public Library (which itself moved to 127 Amsterdam Avenue in 1992).  While it’s unexciting architecturally, the fact that it was available at a relatively low price and congregants were able to purchase the building and adapt it as a Synagogue is fairly extraordinary.  “The synagogue remains grateful to its beloved members Jack Weprin, and Jane Weprin-Menzi who passed away just a month ago, for organizing the purchase and making West End Synagogue’s dreams a reality,” says Rabbi Emily.  According to a 1997 article in the NY Times, the 2nd floor library space which “was the library circulation room, became the sanctuary.” The lower level which had held children’s books is used as a religious school and for social events.

Rabbi Emily Cohen loves her role as a spiritual leader of the West End Synagogue.  She has held the leadership role for just over a year and appreciates the challenges not only of having a congregation that cares deeply about approaching commitments in new, carefully examined ways, but she’s had the added necessity of leading virtual services from her home in Brooklyn over the Covid months.  Hybrid services were held over the recent High Holy Days and are expected to continue.

Rabbi Emily says that the Synagogue is small with a community of only 215 or so member families.  Most members represent a diverse mix of Jewish New Yorkers, counting among them many professionals in areas such as health, law, finance and education and the arts.  They often bring these areas of expertise into the Synagogue community’s adult education program and many serve as lay officiants for services on months that have five Fridays.

Remnants of the library days? NYPL is still inscribed in the pediment above the front entry.  Rabbi Emily believes what was once shelving for library books, now line the sanctuary space and are used to store holy books.

With its congregation composed of people of all ages and attuned to those with disabilities, funds were recently raised to reconfigure the library lifts originally installed to convey books from one level to another into passenger elevators for synagogue members, friends, family and other visitors.  Synagogue activities will go back to being all virtual for November and December 2021 while these renovations are being made.

Members with expertise have been overseeing upgrading cameras and electronic streaming technology to expand capabilities so that virtual programming may continue into the future to accommodate anyone who might not be able to participate in person, Rabbi Emily explains.

An earlier, but long lasting element in the transition from Library to Synagogue is artistic. Valerie Troyanski who passed away about eight years ago, created etched glass windows to enhance the simple building interior.

Noted in the same NY Times article mentioned earlier, a carved and etched-glass wall was commissioned by Brooklyn Artist Denise Ames to separate the sanctuary from the top of the lobby area. This enhancement maintained a feeling of openness and also blocked the distracting view of the late Blockbuster Video rental that was once across the street.