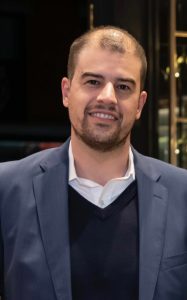 Venchi Cioccogelateria’s pale green gelato is made from Pistacchio Verde di Bronte (nuts grown in a village on Mount Etna in Sicily).  This is Venchi US CEO Davide Cravero’s favorite flavor of gelato.  It is also, he says, “our world-wide bestseller.” Coming in a close 2nd among Venchi customers is dark chocolate.  There are many—more than 150 Venchi shops or “boutiques” as Davide says the luxe company prefers to call them.  They are located in Italian cities, in London, in Hong Kong and in Shanghai among other cities. In New York City, there are four.  The most recently opened at 198 Columbus Avenue.

Gelatos are made by Venchi according to traditional recipes without artificial additives.  Every element of decor in the boutiques has been carefully considered. “The walls, for example,” says Davide, “are painted Palladium silvery gray.” Elements of unexpected humor lend a contemporary touch. Customers enter the store pulling open one of two door handles shaped, come un enorme cono gelato (like a huge ice cream cone).  And, during the past holiday season, Venchi posted on social media a clever animated 30 second video showing a sophisticated group of friends quickly finishing off a delectable assortment of boxed chocolates.

Davide has been working for the company for the past 2 1/2 years.  Coincidentally, his hometown, just 15 miles from Turin, is the place where the company started in 1878.  Davide notes, “I like to say I manage to stay close to home working at Venchi, even though my home is 7,000 miles away.”

According to the Venchi website, founder Silviano Venchi was “a 20-year-old from Turin who loved chocolate so much he spent all his savings on two bronze cauldrons and began to experiment, first in his apartment, then in a small place on Via degli Artisti in Borgo Vanchiglia, Turin.” 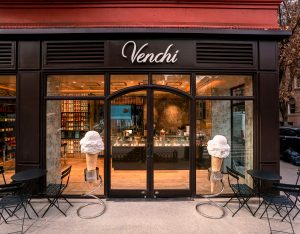 The boutiques all have the same distinctive elegant look and sell the same chocolates and gelato flavors.  Beyond Bronte Pistachio, gelato flavors include Nougatine, Cremino, Cuor di Cacao, Gianduiotto, and milk chocolate Brutto ma Buono.  Additional flavors are added from time to time.  Some are inspired by customer requests.  A gelato cone at Venchi promises no ordinary experience, “Venchi’s gelato was born to be paired with chocolate.  For this reason, our gourmet cones with Suprema XV Spread and grains epitomize the concept of the Cioccogelateria”.

Davide’s personal favorite among the chocolate bars are those made with 75 percent chocolate.  But other tempting options are dark chocolate bars with whole hazelnuts, with orange, pistachio or coffee filling and many more.

Distinctive also are the collectable chocolate boxes designed in Italy.  Some boxes are decorated to look like books with gilt-edged pages.  One in deco style depicts a woman walking, with a box of chocolates under her arm. Describing the chocolate boxes, Davide says one series is designed with images of Florence, Rome, Venice, “to remind customers of our Italian heritage.” Filled with chocolates, these boxes are irresistible and collectable once the chocolates are gone.  A Valentine’s book is described as “Chocoviar Crème Brûlée and Chocoviar Gianduja chocolates in a romantic book shaped tin.” Also for Valentine’s Day, Venchi‘s Italian website features heart shaped chocolates in keeping with “Un amore all’ Italiana (Love Italian Style.) “L’idea regalo perfetta è fatta con amore! (The perfect gift and made with love.)”

Chocolates and gift boxes may be purchased online, but there’s nothing quite like indulging on-site with the purchase of an elaborately constructed gelato-filled cone, topped with a chocolate– Assolutamente delizoso!

Davide says “we’ve been very happy with our welcome on the UWS and other NYC locations (Union Square, Columbus Circle and Bleecker Street) and expect to be opening many more stores across the United Stated in 2022.

Venchi website offers “’Tasting tips’ to make gelato even more delicious…” If you love creamy gelato, we recommend putting a scoop into a champagne saucer glass that’s been cooled beforehand, then make a small indent with the back of a spoon, pour a small drop of olive oil on top and garnish with a sprinkling of organic lemon zest.”