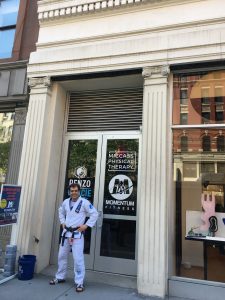 Professor Luca Atalla outside his gym

It is not obvious from the street but the large impressive Renzo Gracie Jiu-Jitsu gym spreads out large in bright white and blue in the sub basement of 246 Columbus Avenue.

Luca Atalla, called “Professor” by his students is thoughtful, engaging and long committed to the art of Brazilian Jiu-Jitsu.  Deriving from the Japanese defense art, the significant characteristic of the Brazilian style is that practitioners work from the ground, drawing their strength from their back.  An accomplished professional photographer, Luca explains this concept pointing to one of his numerous large photographs he’s taken of Jiu-Jitsu competitors.  He explains that although the attack appears to be linked to the way one player uses his legs to restrain his opponent, the effective strength of this hold comes from a powerfully controlled back.

Luca was 18 years old and studying engineering in his home town of Rio when he met and became a student of Renzo Gracie who was six years older.  Early in his friendship with Renzo, Luca recalls that the master took a look at his mechanical schematic drawings and said the only part he understood was the part that could relate to armlocks (a Jiu-Jitsu submission hold that consists in applying pressure on someone’s elbow, securing the arm with the legs.) “I thought that’s what I want to do too.”

Luca left the pursuit of an engineering degree and instead devoted himself to a Jiu-Jitsu- related career.  In 1994, he, along Renzo’s uncle Carlos Gracie, Jr., founded GracieMag, the first Jiu-Jitsu magazine in the world. Luca was its editor for the next 15 years, and eventually went back to university and got a Journalism degree.  Luca came to live in the US in 2007, went to Brazil for three years to launch CrayonStock, a Shutterstock-type digital archive business, and then returned to live in New York.

When Luca and Renzo met almost 30 years ago, Renzo was already a master of the art of Jiu-Jitsu.  Significantly, he is the grandson of Carlos Gracie Sr.  The man who adapted Japanese Jiu-Jitsu into the Brazilian style, popularizing the form beginning in the 1920’s. The father of 21 children, Gracie Sr. grew the popularity of this art with their help.

Renzo came to the US in 1996 opening a number of academies in Manhattan and in Greenpoint, Brooklyn.  Luca and Renzo opened the Columbus Avenue gym in March 2019 after undertaking complicated renovations that took a year to complete.

His love of photography and Luca’s skill is impressive not only in his sport-related photos but also in others-aerial photographs taken from a helicopter, or a small plane.  Many of those were taken in the sky above Rio by Luca and another photographer exhibited in a prestigious Brazilian gallery, sold as a limited series and published in a book. (O Rio visto do Céu)

Luca lives in the neighborhood of the academy and is the father of an 11-year-old daughter who is a Jiu-Jitsu enthusiast. The mood of the gym is both disciplined and friendly.  Two young children skip in slapping their palms “Hi Fives” with Luca as they take positions to start instruction with another instructor.  Luca notes that families often come to the academy together.  These children’s Mom, for example, takes self-defense classes. Children need to be able to focus on the instruction, so usually they are not enrolled before age three.  Luca mostly instructs adults assisted in classes by a team of six.  Relatively few, only five percent of the adult students are aiming to participate in competitions.  “The training is for fun, for discipline and to gain self-confidence, and for women for protection,” says Luca.  He notes that daily life is filled with a variety of frustrations, Jiu-Jitsu helps.