Read for the “back story” behind the Times report here:

Scroll to the bottom of this page for links to court papers, NY Civil Liberties Union Amicus Curiae Brief, and other documents relevant to this case

Stringer sent open copies of the letter to Landmark West! and to Community Board Seven.

On October 17, 2006, the Landmarks Preservation Commission in fact did hold the public hearing that Stringer (and others) had requested.  Virginia Parkhouse filled out the “Public Hearing Speakers’ Sign-in sheet” with her name, home address and in the space marked “Representing,” entered “Landmark West.”  Virginia then stated she had volunteered to read Mr. Stringer’s August 14, 2006, letter into the record, and did so—editing out the call for the calendaring of the hearing because the hearing was, in fact, going on at that moment, and knowing from Stringer’s letter (stating that the stables “should be preserved”) that he supported designation.  She simultaneously distributed a copy of the updated, edited version to the Commission.  (And, of course, Chairman Tierney already had before him the original of Stringer’s letter, sent to him directly by Stringer.)

On November 17, 2006, Jimmy Yan, Scott Stringer’s General Counsel, wrote a letter to Tierney claiming that “an individual” (Parkhouse) gave “the appearance she was speaking and acting on behalf of the Borough President,” and (astonishingly) may have committed the crime of “criminal impersonation.”  Mr. Yan stated that “the Borough President’s views…[on the stable buildings] were provided in a letter dated August 14, 2006, to you as Commission Chair.”  (The letter calling on Tierney to “calendar” the buildings, and to “preserve” them.)

Now it gets interesting.  After Yan’s letter to Tierney, the Department of Investigation subpoenaed Parkhouse, and litigation followed—with Whitney North Seymour, Jr., former U.S. Attorney for the Southern District of New York (the nation’s premier prosecutor’s office) defending Virginia and Landmark West!, challenging the subpoena, and with the New York Civil Liberties Union weighing in strongly as amicus curiae in support of Virginia and Landmark West!.  On a separate sheet you will find some extraordinary quotes from the NYCLU Appellate Division Amicus Brief.

But back to Yan’s complaint on behalf of Stringer.  He stated that Stringer’s views were in his August 14, 2006 letter (“calendar;” “preserve”).

Except that Mr. Walter M. Arsenault, First Deputy Commissioner for the Department of Investigation, submitted an Affidavit to the Court, dated July 30, 2007, swearing that he interviewed Stringer on January 27, 2007, and Stringer advised him that prior to the October 17, 2006, hearing he had “determined he would no longer support the landmarking of the building [the Dakota Stable] and sent no further communications to the LPC regarding the matter.”

Now who is hoodwinking whom?  Stringer sends a letter to Tierney on August 14, supporting preservation of the building.  He sends copies to CB7 and Landmark West!  Then he changes his mind, but never informs the Landmarks Preservation Committee, or CB7, or Landmark West!  And on November 17, his General Counsel writes Tierney that “the Borough President’s views on these matters were provided in a letter dated August 14, 2006.”

And they had the audacity, the unmitigated gall, to subpoena Virginia!

Yet another item in this sequence of events, reported by the New York Times in its April 12 article:

“On Oct. 1, 2006, two weeks before the [Dakota Stables] hearing, Mr. Stringer received a $3,850 donation from Jeff T. Blau, president of Related Companies, according to city campaign finance records. Related and its officials have given at least $300,000 to dozens of New York City candidates since 1989, including at least $14,000 to Mr. Stringer since 2003, according to city campaign finance records.”

Related Companies is the developer that wanted and got the Dakota Stables torn down so that it could erect a luxury condo tower on the site.

Finally, a word about Virginia — and Landmark West’s volunteers.

Virginia is a steadfast, hard-working, straightforward, committed citizen of New York City.  She has appeared frequently before the Commission and spoken on landmark issues on behalf of Landmark West!, the Historic Districts Council (the citywide advocacy organization for New York’s historic neighborhoods), the Murray Hill Neighborhood Association.  She and many other preservation advocates read into the record letters and statements prepared by others.  She is well known to Tierney and the other Commissioners as a “regular.”  Tierney and the Commissioners knew—and know—full well that Virginia Parkhouse is no more a representative of Scott Stringer than she is a representative of the Real Estate Advisory Board.

Volunteers like Virginia are the life-blood of small, grassroots organizations like Landmark West!  She—and other volunteers—stuff and stamp envelopes, do research, make telephone calls, participate in critical committee meetings (e.g., the Certificate of Appropriateness Committee that reviews—and testifies at the Commission—on every application for work in the landmarked districts on the Upper West Side), staff LW’s tables at street fairs, attend Community Board meetings—and more.

“Virginia Parkhouse has spoken as a private individual before the New York City Landmarks Preservation Commission and now finds herself investigated and subpoenaed by the Department of Investigation of the City of New York (“DOI”) for non-perjurious statements made at the hearing.”  (p. 2)

“Any further investigation serves only a retributive interest in prosecuting Ms. Parkhouse for her speech.”  (p. 16)

So, what is this issue really about?  Why would an elected official and a city agency facilitate the subpoena of a volunteer for a community-based nonprofit organization who exercised her right to participate in the public process and speak what she and others believed to be the truth at a public hearing?  Only Robert Tierney and Scott Stringer know the real answer.  But, in our view, the vicious harassment of Virginia Parkhouse says a sad lot about the politics of New York City’s real-estate development process and the value some officials place on their relationships with developers over their responsibilities to the public.

Victory! The Landmarks Preservation Commission designated the New-York Cab Company as an individual landmark on November 14, 2006. Thank you to everyone who signed our online petition, wrote letters to the LPC, and testified at the public hearings. Click here for the LPC press release.

Too Late! While the LPC did schedule a public hearing for the former Dakota Stable on October 17, 2006, it was unfortunately too late. The building’s owner had already secured a permit to remove historic features from the facade and wasted little time acting on it while the LPC wrung its hands from the sidelines. The absence of this “stylistic gem” serves as a reminder of how vital it is for the LPC to schedule public hearings in a timely matter. READ MORE:Click here for articles in LW! Fall/Winter 2007 Newsletter. 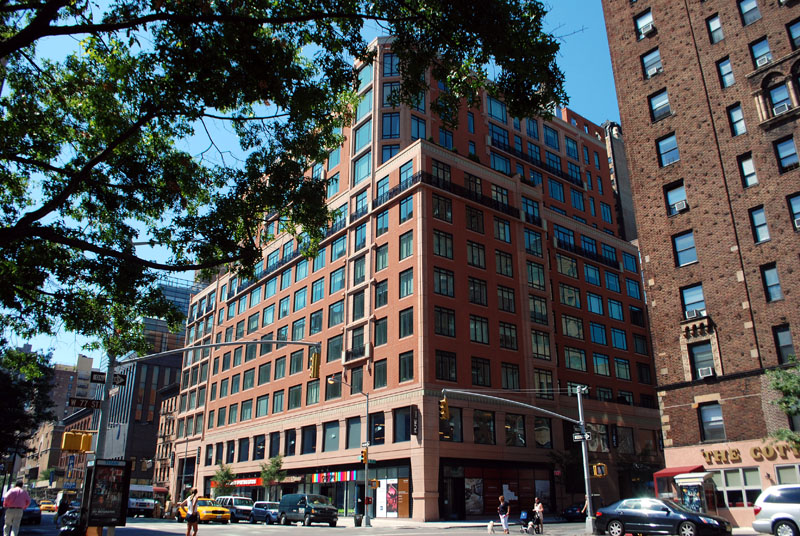 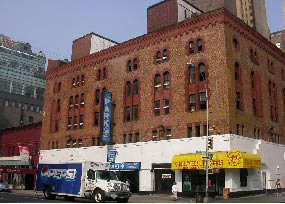 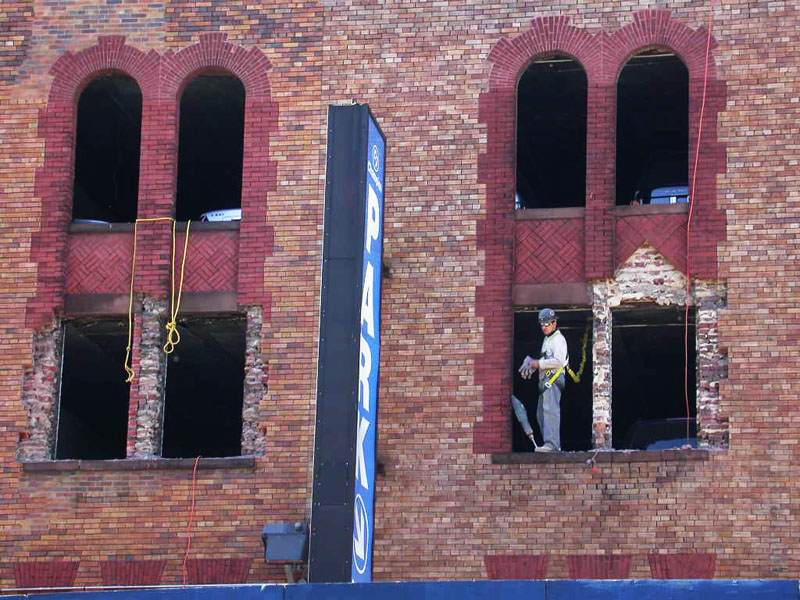 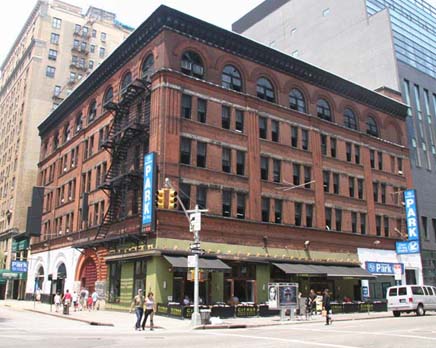 New York’s wealthiest residents often erected private stables for their horses and carriages — many of those located on the Upper East Side have been designated as landmarks. Middle-class people, however, could not afford their own stables. Instead, they boarded their horses in commercial stables. These are of great historic importance in understanding how people lived in neighborhoods such as the Upper West Side and, as is the case with these two buildings, the commercial stables are often of great architectural distinction. The former New York Cab Company Stable at 318-324 Amsterdam Avenue is a bold Romanesque Revival brick building. The more subtle Dakota Stable is an Italian Romanesque structure designed by Bradford Gilbert, who designed the Tower Building (1888), one of New York’s most important early skyscrapers.

Click below for press:
The New York Times
Preservation Online