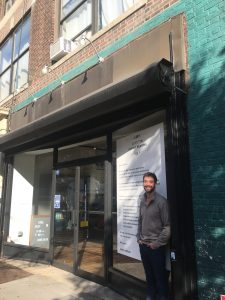 Sherry Ansky is well known in Israel as a food columnist and writer of many cookbooks. Her daughter Michal Ansky is famous as a TV cooking show judge and a food journalist. The mother and daughter and Michal’s husband Eyal Amir, have just opened Sherry Herring at 245 West 72nd Street. They chose the UWS for the location of their first venture in the US, says Eyal, “because of the cultural Jewish heritage of the neighborhood and traditional affinity for herring.” Although this may have influenced the choice of the shop’s location, the enticing aroma of smoked fish experienced on entering the store is sure to tempt even those who’ve never tasted herring.

The intoxicating flavor of smoked fish at this time is of quality salmon because, actually, as of November according to a sign posted in the storefront, the cured herring fillets, en route from the Netherlands, have not yet arrived. A storyteller, like his wife and mother-in-law, Eyal explains, the saga behind acquiring the best herring. Basically, the search brought him to New York City four times in order to return to Israel with samples “they tasted fine to me” to see if they would meet his mother-in-law’s standards. None were satisfactory. What to do?

Sherry and Eyal went to a source in the town of Katwijk aan Zee, not far from Leiden in Holland. There, they were hosted by the herring fishery owner at his factory. Together, they came up with just the right herring and curing recipe to suit both Sherry and the FDA.

The store on 72nd Street had already been leased. So, it was time to get going with or without the herring (due to arrive in December, 2021). The perfect loaves of baguette had been ordered and the fridge stocked with smoked mackerel and smoked trout along with a variety of gourmet condiments.

Chef Valentino already has fans in the neighborhood. One artist drew a colored portrait of the gregarious, much tattooed chef slicing smoked fish. Eyal will frame it and hang it on the walls of the deliberately sparse, super clean, white-tiled shop. “Sherry even wants the floors clean enough to eat off,” says Eyal.

Michal brought the outdoor farmers market to the old port of Tel Aviv,” says Eyal. Now a tourist destination, it’s there that the first Sherry Herring (only 50’x 50’) was installed about 10 years ago.  Plans to open beyond New York? Yes, Eyal says, “there are many cities that could use us.”