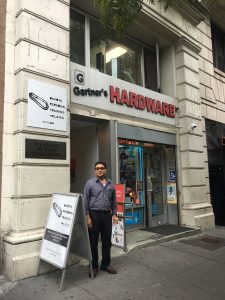 Kunal Bose, owner of Upper West Side Copy shop on the 5th floor of 162 West 72nd Street, is proud that most of his employees have been with the business for 10 or 15 years. “We treat them well and they are loyal, excellent employees, “The first location of the business was on Broadway between 70th and 71st Streets, opened in the 1970s by a man who now serves in an advisory role.

When Bose first came to New York from Calcutta in 1990, His top priority was to find work. He wasn’t too focused on the specifics of what he would be doing and was fine with the idea that he would learn on-the job. Within a few years he became a part owner and then fully owned the business.

Early on, was the pre-personal computer, pre-desktop printer era. Most offices had one shared fax machine.  Most people had never or barely heard of the Internet. This was long before school children emailed in their daily homework assignments. Cell phones came into common use only in the 1980s.

So, home offices were nothing like the mini business settings they are now and co-working spaces didn’t exist.

A neighborhood copy shop was a hugely useful resource. Rental leases, resumes and manuscripts of graduate school theses were among the important documents requiring copies be made, some for sending out, others for saving. Copying drafts of writers’ manuscripts was a regular type of job “and it still is to some extent,” says Bose, explaining it’s less expensive than doing it at home.

As business equipment technologies were adapted for home use, and even color copies of photos could be made on a printer resting on your kitchen table, copy shops had to evolve. At the very least they had to retool to receive orders including digital images via email. Many refinements became available including sophisticated editing features to enlarge or reduce printed images as well as to enhance clarity and hue.

Anything you wanted to look professional could have that appearance. Today advancements in copiers make it possible to produce a copy of an entire book and bind it at a copy shop.

Since today you can scan documents and send them with your smartphone, Upper West Side Copy shop has directed its efforts far less on copying and faxing as it did in decades past. More time is spent on producing volume, great numbers of brochures for promotion of businesses and theater posters “Lincoln Center and the Kaufman Music Center,” are among our customers,” says Bose.

Upper West Side Copy shop moved two years ago to its current location. It’s a bright, open space. “I’ve gotten to know this UWS neighborhood,” says Bose, who lives in Queens. “I like the people here.”