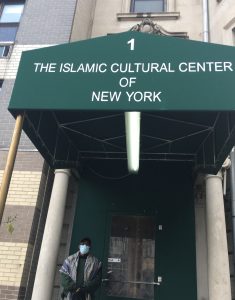 Interested in learning something about the practice of Islam on the Upper West Side?  Curiosity is the key. The Islamic Cultural Center of New York is open to everyone.

Three worshipers, among them two of the building’s caretakers and a yellow cab driver were on hand one recent Thursday shortly before the late morning call to prayer (Adhan).  They were interested in answering questions about their mosque.

Located at 1 Riverside Drive since 1957, it is a branch of the newer stunning, monumental mosque on East 96th Street designed by Skidmore, Owings & Merrill LLP, whose minaret was designed by Swanke Hayden Connell & Partners.

Mamemaname Ndlaye is from Senegal in West Africa. He works in New York as a yellow cab driver.  He discussed the distinctive calls to prayer that invite worshippers.  Do these messages to join the five daily prayer meetings go out from the Islamic Cultural Center of NY as a recording?  Mamemaname explained that, no, it is a live event.  Demonstrating, he stood tall, reciting the words in Arabic in his strong resonant voice.  Translated into English, the prayer calls “There is only one god and Mohammad is his messenger.” Worshippers are both men and women. Children join in special holidays.

No one comes to pray without first washing their hands, elbows and feet in the Wudu area downstairs. The ritual washing also includes cleaning the nostrils and mouth, sprinkling water over one’s hair, and a quick touch of water to cleanse the ears.  A father of eight children, Mamemaname says that like the many other worshippers at this mosque, he came to New York not as a tourist, but motivated above all to earn a living and send money back home to support family.

A mosque caretaker who lives on site is originally from Sierra Leone.  Fellow Muslims who attend services at this mosque are from Jamaica, a number of different countries in Africa, and from other parts of the world. There are some worshippers who are from NYC and other regions of the US.  Like other houses of worship, during the worst of the Covid months, the mosque limited the number of worshippers who could pray inside.  Now, more people are permitted into the building, but many fewer than pre-Covid, when as many as 400 worshippers came to Jummah, the Friday prayer, and as many participate in breaking the fast together during the month of Ramadan.

The main entry-level prayer room is not big enough to accommodate large groups. Worshippers are spaced as needed on all three floors of the building.  Those not in the main room on the entry level listen to the service via loudspeaker or watch on television.  The lights of the prayer spaces are deliberately kept dim.  There are no distracting decorations.  The focus is all on prayer.  “It’s peaceful,” says Mamemaname.

Salabuddin Muhammad, was born and raised in NYC.  He has worked as a caretaker both at the 96th Street mosque and Riverside Drive location.  When asked about programming offered by the mosque, he says that regular lessons in the Koran and Arabic, hosted by the mosque at 96th Street, are currently offered virtually.  He and the others noted that non-Muslim community members are welcome to join the break fast during the month of Ramadan, which in 2022 will be April 2 – May 2nd.