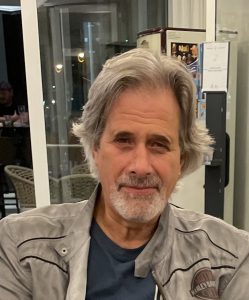 On occasion, Phyllis Samitz Cohen, Director of Public Art at the Municipal Art Society, stopped at Ben & Jerry’s at 2720 Broadway, the northeast corner of 104th Street and Broadway. More than savoring a chocolate mint ice cream, her purpose involved catching a glimpse of a colorful glass mosaic mural installed on a corner column.  She calls the work “a hidden gem.”

Her notes about the colorful, exuberant abstract mural, provide background: in 1947, the artist Max Spivak (1906-81) was awarded his first architectural commission to design an abstract mosaic mural for the interior and exterior of Riker’s restaurant on 104th Street and Broadway.

Spivak had come to New York as a child with his family. He graduated from CCNY and became an accountant.  However, a trip to Paris decided him by the late 1920s to be an artist. Back in the United States, he was among the early participants in the Works Progress Administration (WPA).

Cohen shares that Spivak’s mural recall’s a Miro-style whimsy and is an unexpected note of artistry on a corner column at 2722 Broadway where Riker’s had been located. The once elegant building itself opened in 1923 as the Broadway View Hotel, renamed the Regent in 1933. Its provenance includes Architectural design by Carrere & Hastings; and Shreve, Lamb & Harmon.

Cohen, who has a background in art history and conservation had more than a little to do with orchestrating the restoration of this distinctive mid-century piece of public art in 2002. Cohen has been Director of Public Art for The Municipal Art Society (MAS) Adopt-A-Monument program since she began working at MAS in 1987.  The program expanded to include murals in 1991. 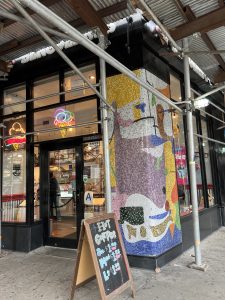 She credits the success of the 104th Street Spivak mural restoration project to the advocacy provided by people from a number of nonprofit organizations. More specifically, the extensive restoration of the murals could never have been achieved without activists of the time including Fred Papert (42nd Street Redevelopment Corporation) and Rosanne Haggerty (Common Ground). She also cannot offer high enough praise for Stephen Miotto.

She describes Miotto as a preeminent mosaic craftsman who has produced magnificent mosaic murals throughout New York City. These include subway stations throughout the boroughs, public schools, and office buildings. The need for repair of the 104th Street mural was first brought to the attention of the Adopt-A-Monument and Adopt-A-Mural program by Michael Gotkin, an Upper West Sider who lived nearby. Cohen recalls that when Riker’s was being cleared for closing, Gotkin spied the mosaics mostly hidden beneath the boards that covered them.

Among other initial challenges for the restoration was gaining the cooperation of the managers of Regent Family Housing which was operating the homeless program in the former Regent/Broadway View hotel that by then was owned by New York City. Some formerly homeless residents even worked at Ben and Jerry’s.

Miotto, 68, is currently involved with the installation of a huge mosaic mural in New York City whose details are not ready to be announced. He remembers the Spivak project well.  In fact, his godfather, a master of Italian-style mosaics, had installed a number of Spivak murals. “I knew Max Spivak,” says Miotto. “Max was one of the nicest people I ever met. Funny and jovial.”

He explained that his godfather owned a company with partners in the Bronx that specialized in mosaic work.  Miotto’s mother was the firm’s bookkeeper. From the time he was five, Miotto spent a lot of time in the studio.  He worked for his godfather part-time during high school and later in college.  During this period, clients were invited to his godfather’s Christmas parties where Miotto had the chance to meet the artist.

Having completed college as an art major, Miotto went to the Mosaics School in Spilimergo, Italy.  He returned to earn a Master’s degree in print-making.  Still uncertain about a career, he decided to go the route of mosaics, after an artist who had an invitation to exhibit at the prestigious Holly Solomon gallery was determined to have Miotto work with him on preparing an exhibit.  “That’s when I decided to make this my life’s work.

After Miotto’s godfather passed away, the business continued on with his partners. Years later, after Miotto had started in business himself, he acquired a lot of the tesserae (small pieces of glass, marble, and other materials) that were in stock when they were closing the business.  A collection like this is very valuable in matching vintage mosaics for restoration projects.

Now, many years later having become an authority in the field, Miotto’s interest and skill in interpreting an artist’s work in mosaics is as strong as ever.

Asked about her father and the pleasure he took in his work, Spivak’s daughter Nora Marvulo, says, “Knowing the man he was, I’d say that, yes, he was pleased with the work. He loved doing what he did, whether it was creating art or teaching art. He was a very happy fellow. He was kind, funny, animated, loving, generous, hard-working, with strong convictions. My cousins called him “Uncle Mackie, the children’s uncle”.

The following was written by my cousin, Ellen (my mother’s side):

arms thrown up in a resounding

a spin, a chase, a tumble

Let the turkey get cold

Let the adults sip their Manhattans

Six is not too young to discuss

Politics and the plight of the Negro

The raison d’être of Art

The joy of Music.

Uncle Mackie touched us all.

From him comes our

Respect for the creativity of man; our

Reverence for the beauty of life.

We grew well from his time on