Hydrangeas That Take Your Breath Away 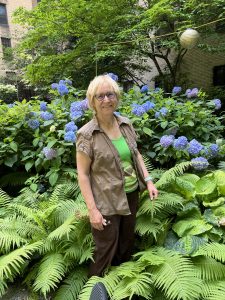 As any gardener, even a window box gardener, knows, gardens take time and care. The deliberately planned artless chaos of an English garden is no exception. Kieran O’Connor, Superintendent of the Astor Court at 205 West 89th Street, explains he’s not an expert on the ongoing task of the planning and care for plantings in the courtyard of Astor Court built in 1914. That role belongs to Sabine Stezenbach, Senior Account manager at Town and Gardens, LTD, a landscaping design firm based in Long Island City. Daily maintenance is performed by O’Connor and his staff. Building staff does regular sweeping but no gardening tasks; that is all done by T&G staff twice a month during the growing season.

Town and Gardens, LTD is involved with projects all over the city. On the Upper West Side, gardens under their care include those at the San Remo, and ones at 300 Central Park West and 455 Central Park West.

The Astor Court garden and walkways were an integral part of the design, by Charles A. Platt, architect, landscaper, painter, and author of the book Italian Gardens. Platt’s feelings regarding gardens formulated in his book Italian Gardens are described by Charles Adams Platt and Keith N. Morgan. Platt saw the genius in the Italian concept of a garden as a series of rooms, or apartments, “where one,” he reported, “might walk about and find a place suitable to the hour of the day and feeling of the moment, and still be in that sacred portion of the globe dedicated to oneself.” American designers took Platt’s observations to heart, and extensively used them.

In a New York Times piece, Christopher Gray wrote that some of Platt’s drawings for Astor Court are initialed “ES” referring “perhaps” to Ellen Shipman… “She often collaborated with Platt in this period, and by the 1920’s she was one of the leading American landscape architects. In 1938 she said in an interview that ‘until women took up landscaping, gardening in this country was at its lowest ebb.”’ 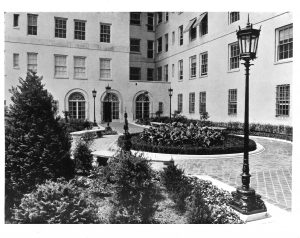 Having undergone various efforts at restoration over more than a century, a major renovation of the courtyard and lobbies (one on 89th Street, and the other on 90th Street) was undertaken in 2012. That’s when Sabine Stezenbach entered the picture. Knowledgeable, authoritative, upbeat, and unassuming, Sabine also has a sense of humor. She’s often dressed with touches of green including a pale green watch band.

Born in a town near the Black Forest in Germany, she was trained as a landscape architect and apprenticed with a horticulturist. She explains this is a formal training in Germany lasting two to three years. After coming to New York about 20 years ago she has worked for the Central Park Conservancy and the New York Botanical Garden’s Adult Education Program and is a member of a Gardening Communication organization and MetroHort, an organization of horticultural professionals in the city.

In 2012, when Sabine and her Town and Gardens team came to Astor Court for the first time, greenery-filled old beds bordered the courtyard, but the large main space was barren. “There were just weeds,” says O’Connor. Only the brick pathways and some benches and lanterns had survived neglect.

The Town and Gardens team met with the co-op’s Courtyard Committee to discuss and determine plans for planting a refurbished courtyard. What most concerned the residents? “They wanted a beautiful multi-purpose space that could accommodate a number of activities for both adults and children. So, a place where children could run and play, where barbecues could be hosted, where quiet conversations could take place, and where a resident could settle in to read a book or check email.” Chairs and tables would be provided and could be moved and rearranged for a private conversation or to encourage more people to join a group.

Then, of course, planting considerations involved a selection of trees and shrubs that would thrive despite the extremes of New York City weather. A photo of the original courtyard shows relatively austere plantings, possibly anticipating more luxuriant future growth. Under Sabine’s hand, in late spring/early summer the garden is lush with violet-blue hydrangeas that take your breath away. There are huge ferns, hostas in the borders and dogwoods, magnolias and other flowering trees. And, in keeping with a building committee’s suggestion, there is a corner border filled with fragrant lilies of the valley which are expected to spread.

The creamy brick on the facades of the building that face the courtyard were deliberately chosen to bring light to the enclosed space.  A large section is covered by an extravaganza of Boston Ivy. Sabine dismisses any concerns about ivy growing into the cracks. She says any damage to the grout needs to be repaired with or without Ivy. Extensive inspections of the building and necessary repairs are made every so often with Local Law 11.

“The ivy is about 40 years old. The building is still here.”

The garden provides an oasis for residents who choose to spend some time over a morning coffee or others who may enjoy taking in the sight of the garden as they walk through one of two beautifully renovated lobbies to the other on the opposite side.

“It’s always changing.  A garden never stands still,” says Sabine. She likes hearing that residents are actually using the garden.  Most recently lighted decorations were strung around the garden for a residents’ barbecue attended by 100.