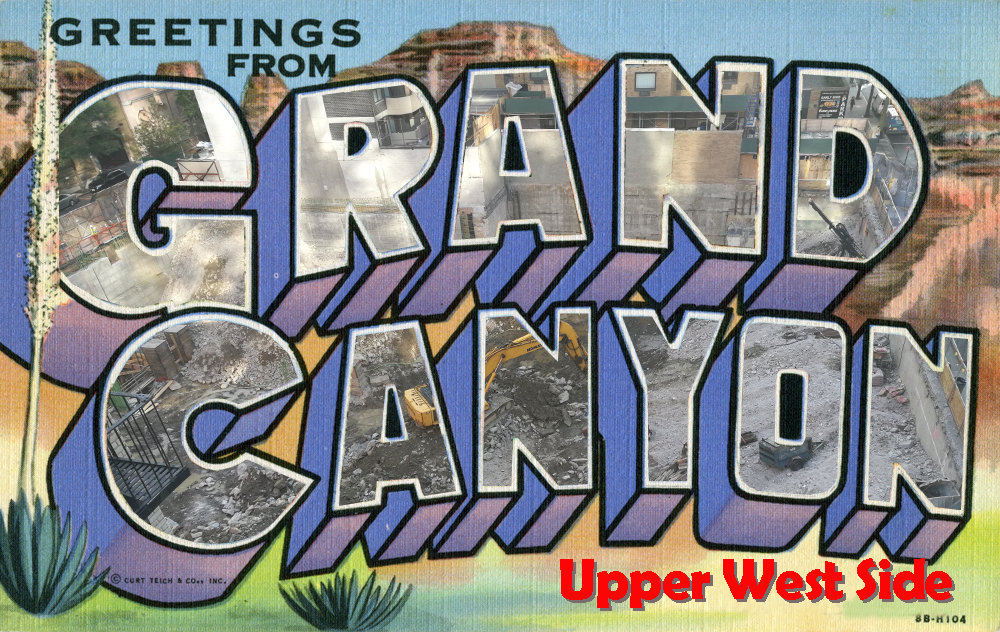 Is all of the UWS excavation leaving you feeling a little “empty”?

‘Life isn’t a sprint, it’s a marathon’
so they say — sometimes it is BOTH.
LW! and neighbors race to file Zoning Challenge against 36 West 66th Street (aka 50 West 66th Street) as long-range efforts to curb supertall developments continue.
Teaming with neighboring building residents we have begun a zoning challenge.  The clock is ticking.  In accordance with guidelines, the report must be filed by September 9th and we have a strong basis for the challenge.  We are grateful to have the insight and support of Manhattan Borough President Gale Brewer and Council Member Helen Rosenthal and their respective staffs (who delivered a crucial letter about the symptoms of this very issue to City Planning just last week); along with so many local groups like the West 65th and West 66th Streets Block Association, Save Central Park NYC, and the continued partnership of Community Board 7, and our colleague organizations.
In 2015, LANDMARK WEST! expanded upon our seminal skyline studyand sounded the alarm for a grouping of buildings on the south side of West 66th street.  Comprised of three ABC buildings (nos. 36, 38 & 40) along with the Congregation Habonim synagogue (no. 44), there was potential for a sizeable development.  Merge that with the unrealized air rights from the former First Battery Armory individual landmark, and then the entire Jewish Guild for the Blind.  This creates a through-block site to West 65th street and the current scenario.

(rendered in this 48-second clip prepared by the block association)
A developer has filed documents with the intent to build a 775 foot tall structure on the mid-block between 22 West 66th and the Armory building.  To put this in perspective, it would be 25 feet taller than either tower of the Time Warner Center; it could fit a standard 77-story office tower inside; and it will feature a mere 42 floors of residential use.  Proposed void space is so excessive that, cumulatively, it could absorb some of the tallest buildings along our 96th street corridor.  One void is over 160 feet on its own…that is equivalent to a vacant sixteen story building in height!
We are not talking about Central Park South.  This is not midtown, nor is it Dubai.  If built, this construction would be the tallest building on the island of Manhattan north of 60th Street.
Aside from the community, environmental, safety and social impacts of this “as-of-right” development, allowing this structure to proceed as designed would effectively undermine the definition of tower-on-base rules city wide.  LANDMARK WEST! will not rest idle, we’ve been training for this!

We are all in this together.

LW! will distribute the full challenge with executive summary once filed.
Stay tuned to our watch blog for updates on this issue and our upcoming public forum.  If you would like to contribute to the costs of this effort and forthcoming legal fees, please join LW! or make a tax-deductible contribution HERE.  This is not an isolated concern as each out-sized development that bends the zoning resolution to its desires sets precedent for future abuses.