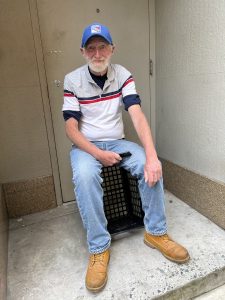 When Bobby Santangelo first came to work at Broadway Farm, it was as an experienced fish man. He was never a fisherman, “I like to keep my feet on dry land.”

Born and raised in the Richmond Hill neighborhood of Queens, he says “if someone called for Robert, I don’t know who that is. The only person who ever called me Robert, was my father coming after me because I’d done something wrong.”

As a young man, Bobby was working in a bar, when a friend of the owner said they were hiring a fish man at Balducci’s (the original one on 6th Avenue and 9th Street). He learned everything there was to know on the job about scaling and cutting, filleting, and basic preparation of fish and shellfish.

Then in 1981 he welcomed a new opportunity and became manager of Jake’s a new, old-style fish market where you came in to make your selection of a whole fish or a specific weight of say, salmon, lemon or gray sole, tuna or swordfish. “We also made a lot of poached salmon for people.” Customers asked for his advice on what to buy and suggestions on recipes. They also chatted about everything under the sun. It was part of the marketing. “You have to know how to schmooze,” says Bobby.

Jake’s was located at 2425 Broadway on the West Side of Broadway right next door to Docks Oyster Bar and Seafood Grill, a popular fish restaurant. “We supplied all the fish for Dock’s” says Bobby. Jake’s closed in 2003 basically because the price of fish had gotten too high. In addition, customers were finding better prices at supermarkets and many supermarkets had expanded the quality and variety of fish they offered. The convenience of online shopping over the past 20 years, and of course, Covid restrictions have also drawn customers away from going into shops to pick out a piece of fish for themselves or guests. Sales of canned, and frozen fish have increased according to a 2020 report and grab-and-go packaged fish has also increased. All of these factors impacted fish sales at Broadway Farm and the fish department closed in March.

But, looking back at the decline of fish markets in general and at the closing of Jake’s, Bobby says, “9/11 killed our business.  A lot of customers moved away and when our lease was done, the rent went up.”

A 2003 New York Times article that appeared when Jake’s suddenly closed, it commented, “cooks were mourning, dinner parties were canceled, and the poor fish were left hanging. Jake’s Fish Market, a small shop with an enormous reputation at 89th Street and Broadway, closed abruptly slightly over a month ago, leaving its customers stunned. “I loved the fish business,” says Bobby.  When Jake’s was thriving the store bought as much as 1,000 pounds of fish from the wholesale Fulton Fish Market, according to the New York Times.

In need of a job, Bobby was walking on Broadway with his girlfriend of the time when he saw a sign in the window advertising an opening for a fish man. Broadway Farm at 2341 Broadway, in the southwest corner of the Euclid Hall building, was, and is a lively, welcoming local market with fruit, vegetables, and flowers displayed outside. Inside the shelves are stocked with everything from granola to bread, pastries, cheese, packaged poultry, meats, and fish. Initially, Bobby managed a fish department. Now, with the reduced demand for fish, he’s a floor manager in charge of activities relating to a broad variety of groceries and other products. Even packaged sushi is sold here. Things are so different from decades ago when there were only a few Japanese restaurants serving sushi and this was not an item offered at local grocery stores.

Bobby likes working at Broadway Farm but misses the old days at Jake’s because nothing can quite capture the neighborhood vibe of marketing at a Mom & Pop type shop (like Jake’s) that involved quite a bit of banter along with picking out a few fillets of flounder which promised to be delicious, poached in a bit of butter and served with a sprig of parsley!