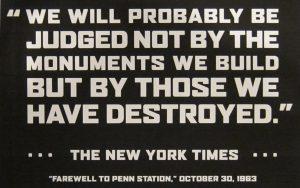 Community Board 7 to vote on West-Park Presbyterian’s hardship application.

It is NO SECRET that the congregation of West Park Presbyterian has applied to the New York City Landmarks Preservation Commission requesting permission via a Certificate of Appropriateness to demolish their individually-landmarked home, built in 1883-85 and 1889-90, in favor of a privately-owned 19-story luxury condominium project.
Click to view their Presentation Materials & Supplemental Materials
LANDMARK WEST! remains steadfast in our belief that DEMOLITION BY NEGLECT must not be rewarded. Owners of landmarks have a duty to society by law. Further, owners of not-for-profit sites who have reaped the benefits of their tax-free status for three or more years do not have the right to first and best use of their property. This is simply the law.
The applicant estimates over $18 Million to repair the facade (p.197). Our numbers are NEARLY ONE-THIRD as much. This team of professionals led by Page Ayres Cowley Architecture LLC*, includes ADS Engineers, (Building Services), Noel Building Consultants (Code & Expediting) and The Tocci Group (Cost Estimating), among others, totals $6,624,940.

Why do these numbers matter?

Because they form the basis for hardship in their rate-of-return calculations. If the numbers don’t compute, the hardship is denied, and the landmark status of the structure remains.
* Principal is LW! Board Chair Page Cowley
CB7 Full Board Meeting Details:
CB7 will vote on their resolution Tuesday. READ RESOLUTION
CB7 asks that you submit your testimony  mn07@cb.nyc.gov
SIGN-UP in advance to Testify at Meeting https://bit.ly/3atMUZL
They warn: Based on the amount of sign-ups and constraints on time, we may need to limit the time and the amount of speakers that may be able to participate

The Center at West Park has prepared a Petition:  HERE