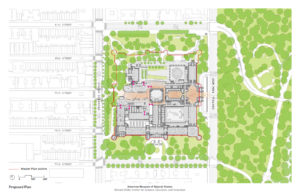 The Parks Department received testimony on Thursday, June 15th in response to their posted DEIS prepared by AKRF.  The full report, posted on the PARKS DEPARTMENT WEBSITE covers various expected impacts of the Museum’s proposal.  LW! upheld our prior position about the need for a masterplan.  Scroll down for our full testimony.

YOUR comments may be sent to Owen Wells until June 26th:

LANDMARK WEST! wishes to comment on the application to demolish three existing buildings, and construct a five-story (up to 105′ tall), 180,000-gross-square-foot addition on the Columbus Avenue side of the NYC Individual Landmark American Museum of Natural History at 79th Street, a site located in Theodore Roosevelt Park in the Upper West Side/Central Park West Historic District.  This expansion, occupying approximately a quarter-acre of public parkland is for the Richard Gilder Center for Science, Education and Innovation.

LANDMARK WEST! has testified previously on this project, including at the Scoping Session in April of 2016, noting that the Statement of Significant Effect recognizes “that the proposed project may have a significant impact on the quality of the human environment”.

In reviewing the twenty primary sections outlined in the Draft Environmental Impact Statement (DEIS) it is clear that the applicant-driven program stands paramount to any lens of evaluation.  Moreover, the applicant expects the City and the public to accept its self-serving analysis of future impacts/no impact but refuses to put forth a comprehensive master plan to guide its growth.  The refusal to do so signals the Museum’s intention to continue expanding into the Park.  The foresight we seek may have prevented the proposed demolition of the Weston Pavilion, a 16-year-old facility, which is among the casualties before you.  The following comments cite directly from the New York City Parks Department evaluation, with the understanding that there will be a “project attendance and utilization increment of approximately 745,000 annual visitors” (1-15)

“The proposed project would result in a reduction in available open space in Theodore Roosevelt Park of approximately 0.27 acres…While adverse, this loss…would not result in a significant adverse impact…” (3-2)

Regarding Historic and Cultural Resources:

“…beyond the Museum complex, the proposed project would not be anticipated to have any significant adverse impacts…” (5-17)

One must question this report comprised of alternative facts for an alternate reality.  The Schizophrenic findings find adverse impacts and repeatedly dismiss them in the same breath.  Furthermore, the report fails to address cumulative impacts.

For all of its examination, the DEIS does not assess the Museum Program, which the applicant claims is the very impetus driving this process.  The DEIS just accepts it.

In April, we urged the Parks Department:

Gilder Center aside, now is the time when the Museum should be asked to consider off-site alternatives for future expansions as a means of mitigation… Any plan which does not establish limits for future expansion into Theodore Roosevelt Park is fundamentally inappropriate.

After reading the AKRF’s findings—if not their conclusions, we stand by that position.