Movies that Spoke to His Soul 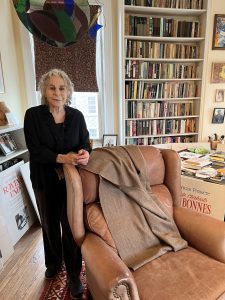 Dan and Toby Talbot defined what many Upper West Siders enjoyed most about going to the movies for decades.  The couple ran the New Yorker [2409 Broadway, demolished], the Cinema Studio [1931 Broadway, demolished], the (individually landmarked) Metro [2626 Broadway, extant], and the Lincoln Plaza Cinemas [1886 Broadway, closed]. Their distribution company, New Yorker Films, introduced French New Wave, Herzog, Fassbinder, Japanese, African, and Latin American cinema. Dan worked with Roberto Rossellini and Jean-Luc Godard, even Agnes Varda, “the reputed godmother of the French New Wave.” Dan worked indefatigably in bringing Shoah to the United States.  “It was a moral undertaking,” he said. According to Toby, ” his contracts with directors were on a slip of paper with a handshake.”

They could see as many as four or five films a day at film festivals to decide which films they might play.  The movies they presented “spoke to Dan’s soul,” said Toby.

The first Talbot movie house was the New Yorker, a repertory house on Broadway between 88-89th Streets.  It was a trailblazer for art houses around the country.

Lincoln Plaza Cinemas (1980-2018) was a cultural landmark in the city, and its loyal audience was attracted to quality American and International films.

In Love with Movies, written by Dan and edited by Toby, was published a few years after Dan’s death in 2017. Dan had an instinct for what was original and innovative in cinema. His expertise evolved from spending weekends as a child watching movies in his neighborhood theater in the Bronx.

Dan and Toby were a team. You get a sense of their exhilaration in the description of his discovery of Shoah, a film about the Holocaust by Claude Lanzman that the Talbots subsequently exhibited and distributed, “As soon as Toby and I read an item in The New York Times one morning in bed, I turned to her and said, “We must fly to Paris immediately to see this film.  She agreed.”

In Love with Movies describes the nitty-gritty of running a movie theater.  “At Lincoln Plaza Cinemas, we had a tight-knit, loving staff,” said Toby.  “Our manager, Ewnetu Admasso, from Ethiopia, met his wife, our cashier, at the theater, married in our living room, and I am godmother to their children.  Our moviegoers regarded him as the “mayor of our block.”  Dan and I always worked together, screening films, attending festivals–and as a couple, with three daughters, for almost 70 years.  I, in charge of our refreshment stand, from smoked salmon to ricotta cheesecake.”

Moviegoers were bereft when Lincoln Plaza Cinemas closed.  At the memorial, five auditoriums were filled, and 12,000 names on MoveOn mourned the theater’s loss.  Dan and Toby created a cultural community of film lovers, and “The task of editing this book allowed me to relive our life together.”

There are many delicious photos in this book, including one of Dan and Toby with Alfred Hitchcock in front of the New Yorker.

The enthusiasm of the Talbots makes this book a delight to read.

On Sunday, May 15, at the (individually landmarked) Church of St. Paul and St. Andrew,  263 West 86th Street between Broadway and West End Avenue, The NEW PLAZA CINEMA will be showing a favorite film of the Talbots, “Tampompo,” and Toby will be signing books.